Jenga! Here Is All You Ever Wanted To Know About This Popular Game

Who invented Jenga, what does it mean and what’s the right way to play it—all your questions have been answered 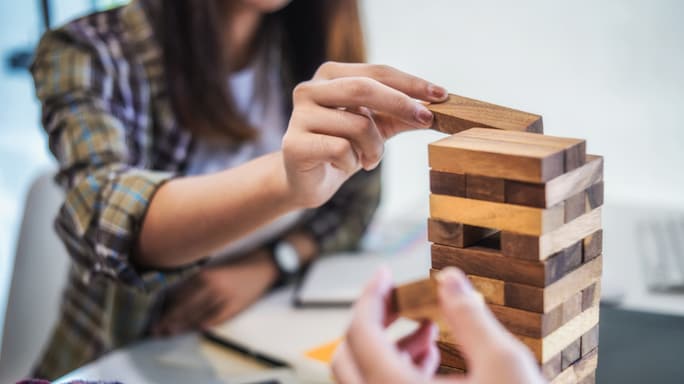 When Leslie Scott’s family moved to Ghana in the ‘70s, they used to play a game with small wooden blocks sourced from a sawmill near her home. When she moved to England a few years later, she brought a few sets of these wooden blocks with her and introduced the game among her friends in Oxford.

“I took the game to a London toy show in 1983. I’d grown up speaking Swahili and gave it the name Jenga, which means “build”,” says Scott in an interview to The Guardian. And, that’s how Jenga was born.

After initial hiccups, the game finally took off when introduced at the Toronto toy fair in 1986. What is particularly remarkable about Jenga’s success is that it caught the imagination of buyers when computer games were already becoming popular.

This is how Scott describes the game’s popularity in The Guardian interview: “It took off in Canada and the US, but I didn’t know it was big in Britain until I went into a toy shop near Oxford with my sister one day. There was a Jenga on the shelf. A woman picked it up and my sister shrieked: “That’s my sister’s game!” And the woman clutched it to her chest and said: “No, it isn’t – it’s mine!” I got such a kick out of that.”

Jenga is a fairly simple game. Fifty-four rectangular blocks are stacked in 18 layers of three blocks each. A player removes one block at a time and places it on the top of the stack; if the tower collapses, you lose.

The world record for the tallest Jenga tower is 44 levels. The popular game has made an appearance in several films like Sharon Stone-starrer Basic Instinct and Tom Cruise-starrer The Firm. If you are a fan of the hugely popular TV show Big Bang Theory, chances are you would have spotted a Jenga in an episode.

Jenga is not limited to wooden blocks though. In 2019, luxury fashion label Louis Vuitton designed Jenga blocks that were made of plexiglass. For most of us who cannot afford the plexiglass blocks, wooden blocks are just fine. After all, the excitement is the same.

If you want to ace the game, Scott has some tips. Speaking to the WIRED magazine, she advised players not to rush and focus on individual moves. “With Jenga, you lose it rather than win it... Each brick is a slightly different size and weight, so every time you assemble a tower of bricks it’s a different game,” she said.