They pull rickshaws, sell tea, work as domestic help and as daily wage labourers for a living. They also bare their souls in their writings and touch many hearts 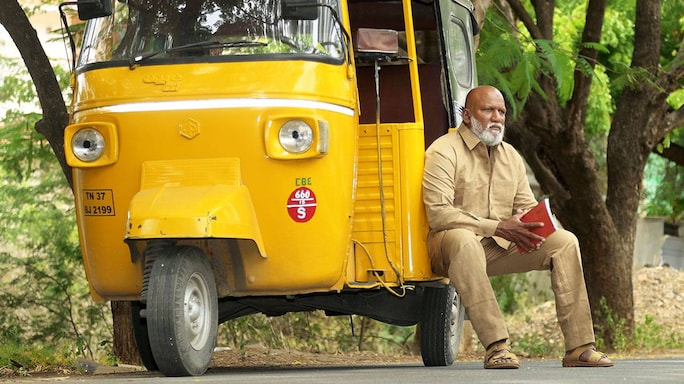 Chandrakumar or ‘Auto Chandran’, as he is called in his native Coimbatore, couldn’t continue his education beyond class 10 singed by poverty, but his love for literature never waned. By the time he was 15 he had finished reading the works of Bhagat Singh and French author Henri Charrière. As a restless teenager, he ran away from his home one day after a fight with his parents and landed in Guntur. His life took a tragic turn when the police picked him up along with his friends for questioning. “We were in our teens and early twenties and all of us were innocent. But we had to undergo 13 days of horrific torture in custody. The police wanted us to confess to a theft we had not committed,” recalls Chandrakumar. Now 57, he sports an intense look with a clean-shaven head and a thick white beard.

He and his friends spent an additional five months in a Guntur jail before a court threw out their case. He returned to Coimbatore, after a year, in 1984. “I started driving the auto for a living, got married and buried myself in books. But deep inside, I was boiling with rage about the brutality I had suffered,” says Chandrakumar. He finally decided to pour out the anger, humiliation and the sheer powerlessness of ordinary folk in a book. Lock Up, written in Tamil, was released in 2006 to critical acclaim. Almost a decade later, it was made into a super hit Tamil film Visaaranai, which was India’s official nomination to the Oscars in 2017.

Chandrakumar has written and published several books since then, with a few more in the works. Meanwhile, he continues as an auto driver to support himself and his family. “When I write, I don’t think of fame, money or even the reader. The challenge for me is to satisfy my own creative urge. If I am happy with what I have written, that’s all that matters. I have my auto to take care of my other needs, which aren’t too many,” he says.

Chandrakumar isn’t alone. Several writers, across the length and breadth of this country, are exploring their creativity and have found a voice, while leading beyond ordinary, working-class lives. They either tell their own stories or of others like them in their writing. Sometimes they immerse themselves in a world of fantasy to create great fiction, and, at other times, they translate hidden gems from regional literature. While monetary compensation helps, given their financial status, these writers are not in it for the money. Fame has come their way, somewhat, but they have remained grounded, carrying on with their mundane jobs. After all, where is the option? 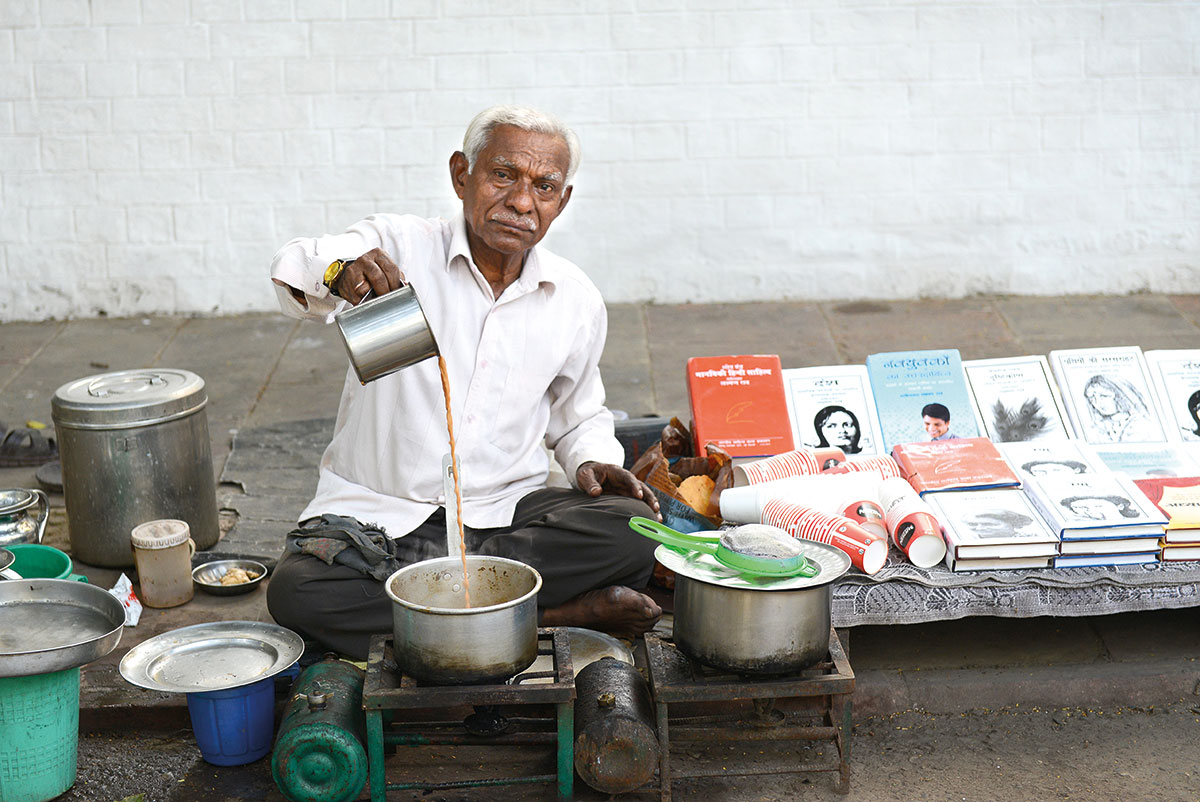 Like Chandrakumar, Laxman Rao also left home, in Amaravati, Maharashtra, way back in 1975. But unlike the man from Coimbatore, Rao’s aim was fairly clear. “My favourite Hindi novelist was Gulshan Nanda. I wanted to write like him, become famous and earn money,” says Rao stirring tea on a kerosene stove in front of him. Delhi was the place to be, to become a novelist, he believed. “I could study only until class 10, but becoming a writer was an obsession,” he says. While working as a daily wage labourer and later as a seller of bidis and cigarettes, to make his ends meet, Rao managed to write his first novel Nayi Duniya Ki Nayi Kahani in 1979. But he couldn’t find a publisher. “How could a person doing menial jobs be a writer?” they asked. But Rao did not give up. He self-published this book from his savings. “I thought my book would become a classic—nothing of the sort happened. But that didn’t stop me from carrying on,” he says.

He set up a tea stall under a tree, right in front of Delhi’s Hindi Bhavan, sometime in the ’90s. Rao completed his graduation when he was in his 50s and did his post-graduation in his 60s. Twenty-five books later, he continues to sell tea and his books from the same spot. Rao claims that selling tea was his main source of income until around five years ago. “I am 67 now and my sons tell me that I should stop selling tea. Writing has brought me fame, but this stall is my identity,” Rao says, as he poses for a photo with an admirer who has come to introduce his newly-wed wife to him. 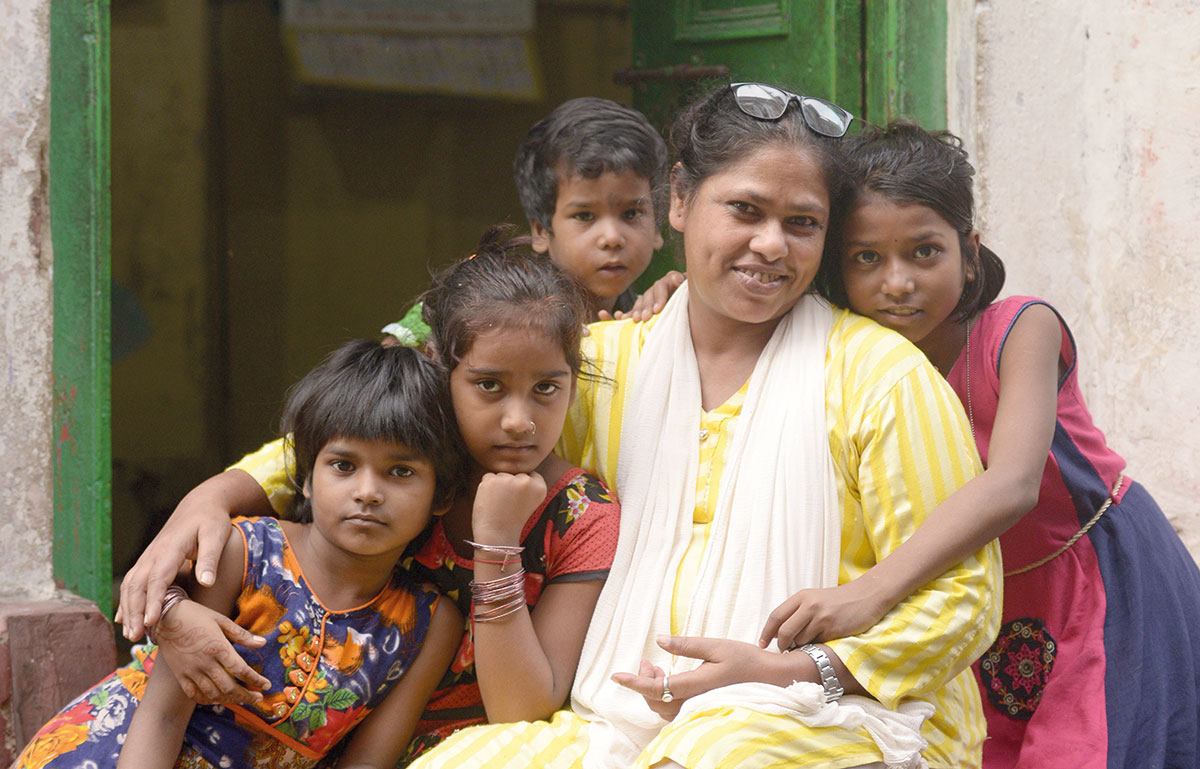 Far away in West Bengal, Baby Halder, 46, was faced with her own challenges, growing up. She loved going to school, but the conditions at home were so bad that she had to give up after class eight. She laughs when asked if she ever nursed dreams of becoming a writer. “No, no, no. All I hoped for, as a child, was to get a meal and some sleep without facing any abuse. Survival was my only aim,” Halder says. These weren’t big goals, but little Baby could not have taken them for granted. Her mother abandoned Halder and her sister when she was barely four. Her abusive father forced her to marry a much older man when she was 12. She faced unimaginable physical and mental abuse from her husband and in-laws and was a mother by 14. “I wanted to play and study, but I could do neither,” says this mother of three.

After years of hardship, she found an employer in Gurugram, Haryana, who treated her with respect and discovered her love for books. Halder remembered most Bengali authors she had read in school—Rabindranath Tagore, Kazi Nazrul Islam, Bankim Chandra Chatterjee and others. Her employer encouraged Halder to write her own story. Which she did.

Says Halder: “I felt immense relief after writing my book. I had poured out all the sorrows and struggles I had gone through, and felt totally liberated”. Her memoir Aalo Aandhari was published as A Life Less Ordinary in English in 2006 to great acclaim.

She continued to work as a domestic help for several more years after which she started to work with NGOs in Mumbai and Kolkata. She is currently in Kolkata working with sex workers and their children. “I have written some more books and I am ready with two more manuscripts about the life and struggles of sex workers and their children,” she says. Halder says that she has found her calling and hopes to continue—and inspire others.

Life on a Rickshaw 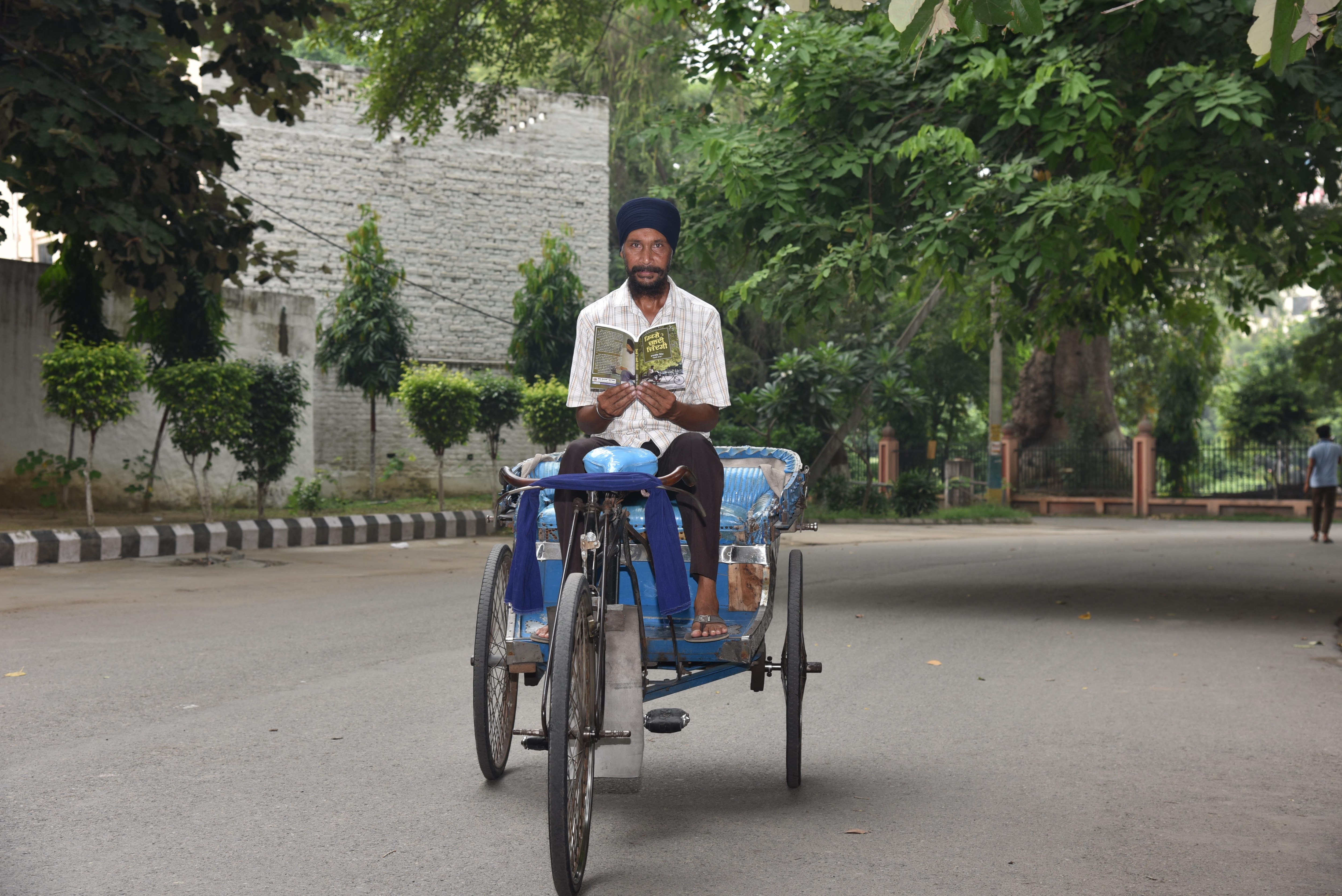 Rajbir Singh has penned a book based on his conversations with the people travelling in his rickshaw. (Photo credits: Prabhjot Gill)

Like the rest of the authors here, grinding poverty also forced Amritsar-based rickshaw-puller Rajbir Singh to drop out of school. “I was in class 10 when my father fell so badly ill that we could no longer afford school,” says Singh, 42. He did not know that his writing was worth anything, until he wrote a letter to a newspaper.

It was in response to a television programme in which a well-to-do group of Sikhs was being felicitated as the “real upholders” of the faith. Singh wrote back a sharp missive, saying that every honest Sikh, no matter how poor, was an upholder of the faith. He had identified himself as a rickshaw-puller at the end of the letter. This letter was published and soon he was asked by the newspaper to write a column. One of his readers suggested that he should write about his passengers. There was no looking back, thereafter. Two years ago, he published his own book Rickshaw Tey Chaldi Zindagi (Life on a Rickshaw). “People from around the country and the world have travelled in my rickshaw. The book is about the conversations I’ve had with them,” he says. The book has gone for two reprints already within a span of two years.

His greatest moment, Singh says, was when he saw the pride in his parents’ eyes at the release of his book. “My father, who also pulls a rickshaw to this day, had tears of joy. That was enough for me,” he says. 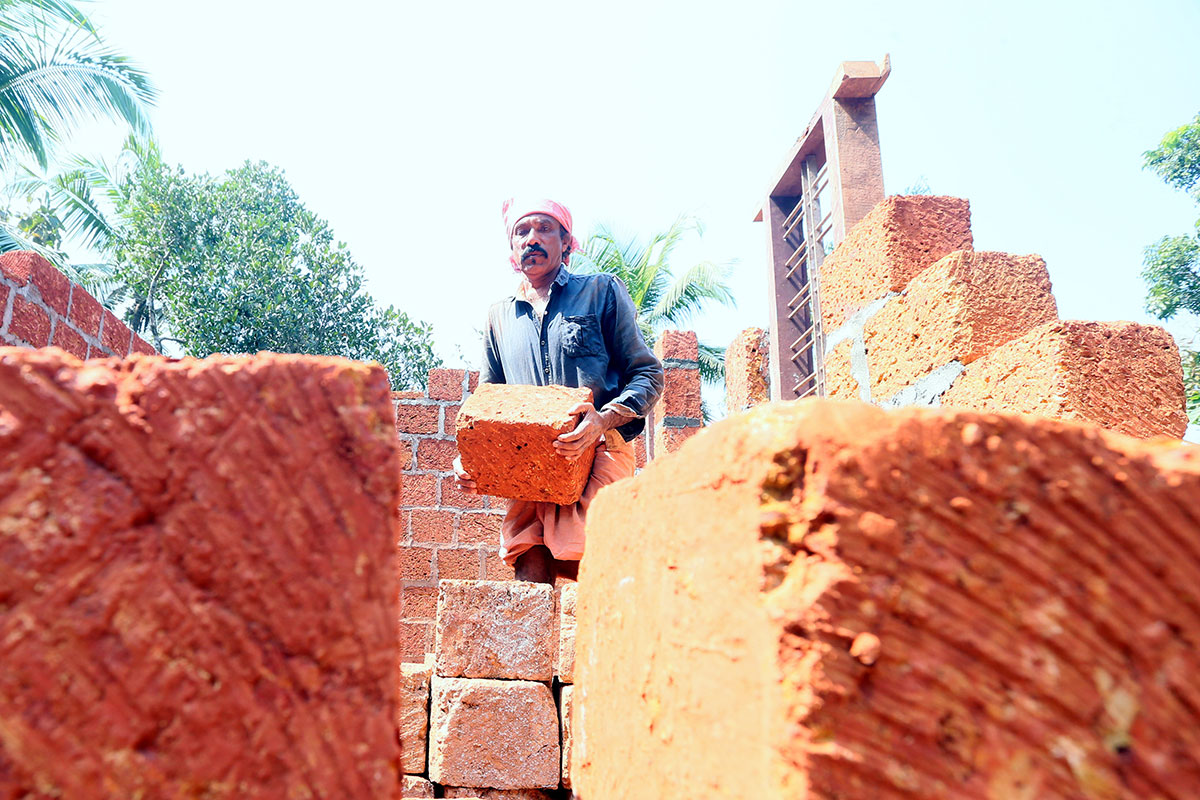 Shafi Cherumavilayi is a master translator, who works as a labourer for a living. (Photo credits: K. Sasi)

It was while working in a tea stall in Bengaluru that the Kannur-based Shafi Cherumavilayi, 57, discovered his love for Tamil. “That was in the mid-’80s. I picked Tamil, as most of our customers were labourers from Tamil Nadu,” he says. A Malayalee, Cherumavilayi slowly fell in love with the language and its literature. Thirty-five years later, he has translated many popular Tamil books into Malayalam and has even won three awards. Meanwhile, he also works as a daily wage labourer, to earn a living. Cherumavilayi has translated the works of Perumal Murugan, Thoppil Mohamed, G. Thilakavathy and quite a few others so far. Did he not look for an easier job? “Nobody offered me one and working as a labourer is the only thing I have done for almost 30 years now,” he says.

“I love it when my translated works win awards. I am really pleased when someone like Perumal Murugan praises my translations—what more do I need?” Cherumavilayi asks. He emphasizes that his needs are limited. A school dropout, he has been too busy with his translation work to think of either writing a book of his own or getting a formal degree.

The satisfaction of seeing their names on their published works is probably the greatest motivating factor for these extraordinary authors. In their heart of hearts they would probably like to take up writing full time—only if there was another less taxing way of making their ends meet. Who knows, writing could pull them out of their situation some day?

Do You Like This Story?
91
0
Other Stories
Please enter valid text
Must Reads
Latest Issue