Won't You Be My Neighbour-and BFF?

After moving to the suburbs, I felt forlorn and friendless. That’s when I spotted her across the street—cool and confident, taking out the recycling 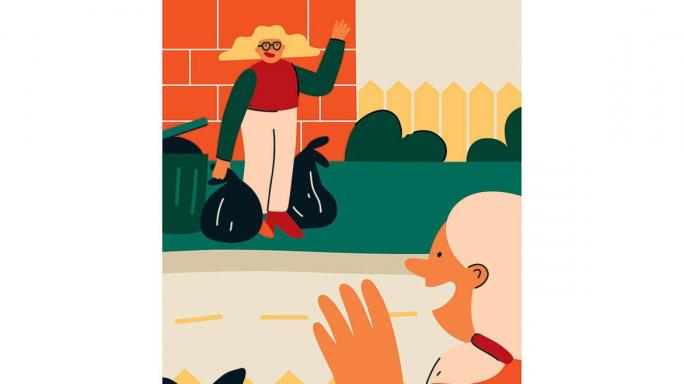 A few years ago, I moved from Toronto to Aurora, Ontario, about an hour’s drive away. I’d been happy as a condo-renting city girl, but my boyfriend was a homeowner in the suburbs; to take the relationship to the next level, I had to uproot. At the time, I was a radio DJ and, thanks to the power of technology, working from home. I didn’t have the company of colleagues, so I was hopeful that I’d make friends in my new neighbourhood. Shortly after settling in however, I found myself feeling lonelier than I’d ever been. Where we lived, the houses were jammed together so tightly that, from our backyard, I could see into the windows of at least eight other homes. But the irony of living in such close proximity is that no one actually talks to each other; as in an open-concept office, they pretend they can’t hear or see each other to maintain at least an illusion of privacy. I found myself desperate to make a friend. At the grocery store, I held up the checkout line while I asked the cashier what she was serving her family for dinner that night and whether she had any thoughts on the upcoming election. When filling my gas tank, I stopped paying at the pump because going inside meant interacting with another human. I even bought new running shoes so I could jog past the park where mums and their kids played after school. (Turns out it’s considered weird to hang out in a playground if you’re childless.)It was so easy to make friends as a kid. We were all thrown together with the assumption that we’d figure out how to get along, because we had something as basic as childhood in common. But somehow that same thing doesn’t work in adulthood. I was perilously close to throwing in the towel, resigning myself to a future where I had to wear both halves of a ‘best friends forever’ pendant. But then I saw her.

From our second-floor window, while I was sorting laundry, I caught sight of a beautiful, tall blonde taking out her recycling. She wore a plaid shirt tied around her waist and horn-rimmed glasses that made her look like a cool librarian. She walked with confidence—even her ponytail bounced. I gasped, “I recycle too! We have so much in common!” The question was, how would we meet? I couldn’t just knock on her door. What would I say? “Hi, I’m the new girl, can you come out and play?” So I thought, What if I just happened to be jogging by? I put on those running shoes again, but after a few times around the block, dripping sweat, snot and expletives, I hadn’t seen her (though I did remember how much I hate running). I tried gardening outside, long enough to get an opportunity to say hello. But I know nothing about horticulture and I don’t like dirt, worms or anything that calls itself ‘mulch’. I decided I needed to seize on the one thing I already knew about her—she takes out her blue bin. I would wait for garbage day and stage a meet-cute.

The following Tuesday, I woke up a little earlier than usual and put on a touch of concealer and some lip gloss, careful not to look like I was trying too hard. After separating the cardboard and the plastics, I waited. A little after 8 a.m., I began losing my nerve. What if it’s her husband’s day to do the chores? I thought. What if she doesn’t like me?Before I could bail, though, I saw movement. The garage door retracted and the blonde emerged. I grabbed a bin and made my way to the end of my driveway. Just act natural, Murphy, I told myself. “Good morning. How are ya?” I said, cool as a cucumber.“Good. And you?” she replied.“Doing well. It’s supposed to be pretty warm today, so that’ll be nice.” (Good one, Murphy.)“Yeah, I heard that on the radio.” “You listen to the radio? I actually work in radio. It’s my job to tell people the weather. I’m not a meteorologist, just a DJ. I talk for a living. Clearly!” The blonde cocked an eyebrow, looking slightly confused (and hopefully intrigued?). “Interesting,” she said. “Well, I’d better get my son loaded into the car for school.”“Nice. I don’t have kids, but I have nieces. They’re like surrogate children but they go home at the end of the day and they didn’t give me stretch marks. So that’s a positive! Have a great day!” I’d taken the cool cucumber and mashed it to a pulp.As we both walked away, I turned and called out, “Oh, and by the way, I’m Megan.” “Michelle,” she replied.I walked back inside, wearing a giant grin.

Our ‘coincidental’ recycling meet-ups continued for a few weeks until I gathered my courage to walk across the street and engage in an actual conversation. It lasted about a half hour, during which we compared upbringings, our siblings’ names and where we fit in the birth order. We liked each other. There was a spark. I could tell.I decided that it was time to take things to the next level and invited her over—not for coffee or for dinner, but for something far riskier. I asked her to come watch The Bachelor [an American dating and relationship reality TV series] with me. I told her to wear pyjama pants and, without blinking, she said she would be there at eight.

That night, while my boyfriend was out at his league basketball game, I cleaned the house, showered and put on my best flannel. I went overboard on refreshments. We were new to each other so I didn’t know her preferences yet. I bought red and white wine, popcorn, two types of chips, along with some veggies and dip, so she wouldn’t judge my junk-food habits. I lit a vanilla-scented candle. I was ready.Michelle arrived at the door wearing the requisite sleeper pants and a comfortable hoodie. She had also brought licorice—my favourite. As the show started, we settled on the couch and proceeded to drink wine, binge from our buffet, dissect doomed television relationships, tell stories about our own and laugh our faces off. It was arguably the best first date I’ve ever been on. When it was time for Michelle to go, we hugged at the door and I said, “Get home safe.” She laughed and, 15 seconds later, from across the road, yelled, “The commute wasn’t too bad!”

Like any good date, you don’t call the next day. I figured I should wait until garbage day to make my next move, but then I saw her from my window, unloading groceries, and I ran outside. “Hey! Need some help over there?” I called.“Hello! That would be awesome,” she beamed.“I had a really good time the other night,” I said, blushing.“Me too,” she said. “I got home and told my husband ‘I think I made a friend’.” Then she paused and sheepishly admitted, “I asked him if I could call you and he told me not to come on too strong.”From then on, we were like contestants on The Bachelor—we really ‘put ourselves out there’; we were ‘there for the right reasons’; and we ‘found what we’d been looking for’—a new friend to fall platonically in love with.