They Changed my Life

A young Indian girl's passion for swimming takes her overseas thanks to the efforts of her American coach, Ken Schafer, and the loving care offered by her host family, the Whitmans, whose kindness transformed her. 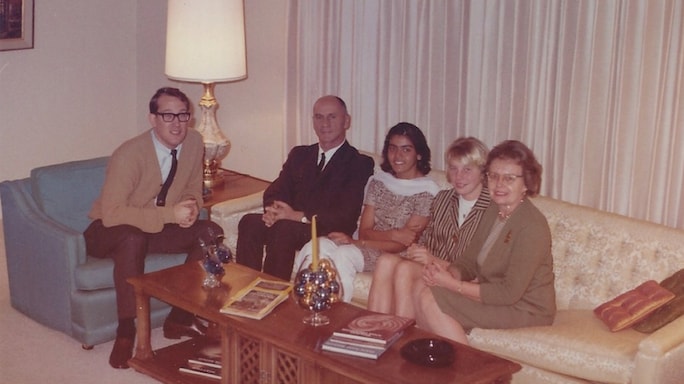 The last race of the day was over. My breathing gradually stilled along with the ripples in the pool, but I stayed in the water, watching despondently as the winners gathered for the medals ceremony.

“Don’t look so sad,” I heard a voice say behind me. I turned around to see a tall, blond, blue-eyed man standing on the pool deck. “The girls who won that race aren’t Indian”, he said crouching down to speak to me. “You came in fourth, but you are the best in your country.”

I had never thought of it that way. He was right. The winners were daughters of foreigners temporarily based in India. They attended the International School in Delhi, where they had the best of training facilities available in India at the time.

“Fourteen, Sir” I replied heaving myself out of the water, my thick cotton swimsuit leaking like a sponge. While the medals ceremony went on in the background, Ken told me he was a swimming coach from California and asked me about my life as a swimmer until then.

My eldest brother, Anil, had taught me how to swim, but I had no real training until I was nine when a coach from the National Institute of Sports came for just three months a year to train the boys at Mayo College, where our father taught. She set aside a couple of hours a week for the daughters of the staff. It was she who had corrected my stroke and encouraged me to take part in competitions. Although I had been competing at the national championships since the age of eleven, winning a medal seemed an impossible dream.

Surprised to hear how little steady training I had had and how limited the chances were of things ever-improving, Ken asked if he could speak to my parents. He introduced himself and told them that he thought I had a lot of talent that needed to be further developed.

“I’ll be at the National Institute of Sports in Patiala next year. I am actually here only to train Indian coaches, but I’ll check if they’d allow Rima to train there under me in her school holidays next summer.”

Surprised by the offer, my father turned to me and asked. “Do you want to do it?”

“YES! Please!” was my enthusiastic reply. I had swum alone much of the time, with little idea if what I was doing was correct. To finally have a coach and other people to train with was something I had never imagined would be possible. I was, therefore, overjoyed when I heard from Ken that the NIS would allow me to train in Patiala the following year.

That year, 1965, turned out to be the most painful, yet the most remarkable in my life. In February 1965, my brother, Sunil, the closest to me in age and my dearest friend, died in a tragic accident. He was just 17. His loss tore the heart out of our family, each of us grieving in our own way. I suffered as never before, and when my tears were spent, I’d thrash my grief out in the pool.

Although my parents thought my upcoming two-month stay at the NIS might be a good change of scene, it was not easy. It was my first time away from home, and as the only young person there, I felt quite lonely, cut off from all that was familiar. But it was Ken, with his tireless enthusiasm, his passion for swimming, and his faith in me that kept me focused. The training was rigorous compared to what I had done before, and I would fall into bed every night happy to close my chlorine-red eyes and rest my leaden limbs before it all started again the following day.

During my first week there, Ken handed me a small package. “Try it on,” he said with a smile. I was thrilled to see it was a nylon Speedo swimsuit that clung to my body like a second skin.

What a contrast to my old cotton one that ballooned when I dived into the water and seemed designed solely to drag me back.

I won my first gold medal at the national championship that year, a fact that filled me with immense joy and Ken with a sense of satisfaction that his work with me was paying off. Yet he realized that what I really needed was a team to train with and steady coaching year-round, something not possible in Ajmer at the time.

“Do you think your parents would allow you to go to California and train there for a year?” he asked me one day.

I was dumbstruck. It was almost as if he’d asked me if I’d like to go to the moon. “I’ll have to ask them, Sir,” I replied, unsure how they would react.

As it turned out, they were open to the idea. For all their doubts about sending their fifteen-year-old so far away alone, they thought that, besides being a great opportunity for me to develop as a swimmer, it would give me a chance to heal. What worried them greatly, though, was who I would stay with and the expenses connected with being abroad. But Ken, ever positive, was sure that these things could be managed. He began by writing to the Los Angeles Athletic Club, and to our great surprise, they agreed to waive their membership fee. The bigger problem, however, would be finding the right family for me to stay with.

Back in Los Angeles, Ken asked the young swimmers at his club if any of them would be willing to host an Indian girl for a year. It was Jodi Whitman, also fifteen, who begged her parents, Margaret and Lee, to host me. After talking it over with Ken and exchanging letters with my parents and me, they agreed even though we had never met and a one-year commitment and the financial burden would certainly complicate their lives enormously.

Alone on the long flight to Los Angeles, I was filled with doubts. How would I manage living with people I had never met before? What if Jodi and I didn’t get along? Would her parents be nice to me? Would I fit in? I needn’t have worried. From the first moment at the airport where they had come with Ken to receive me, I knew things would be all right. Their smiles and their words of welcome as they greeted me felt like a warm embrace. I could not have found a kinder, more generous family than theirs.

Going from a provincial town where clothes were washed by hand and tongas still plied the narrow roads to Los Angeles with its freeways, automatic washing machines and televisions was like stepping into the future. I was terribly confused at times, deeply homesick at others, and needed a while to find my feet. The Whitmans, my surrogate family, gave me all the practical and emotional support I needed to navigate that alien world, and I grew to love them. 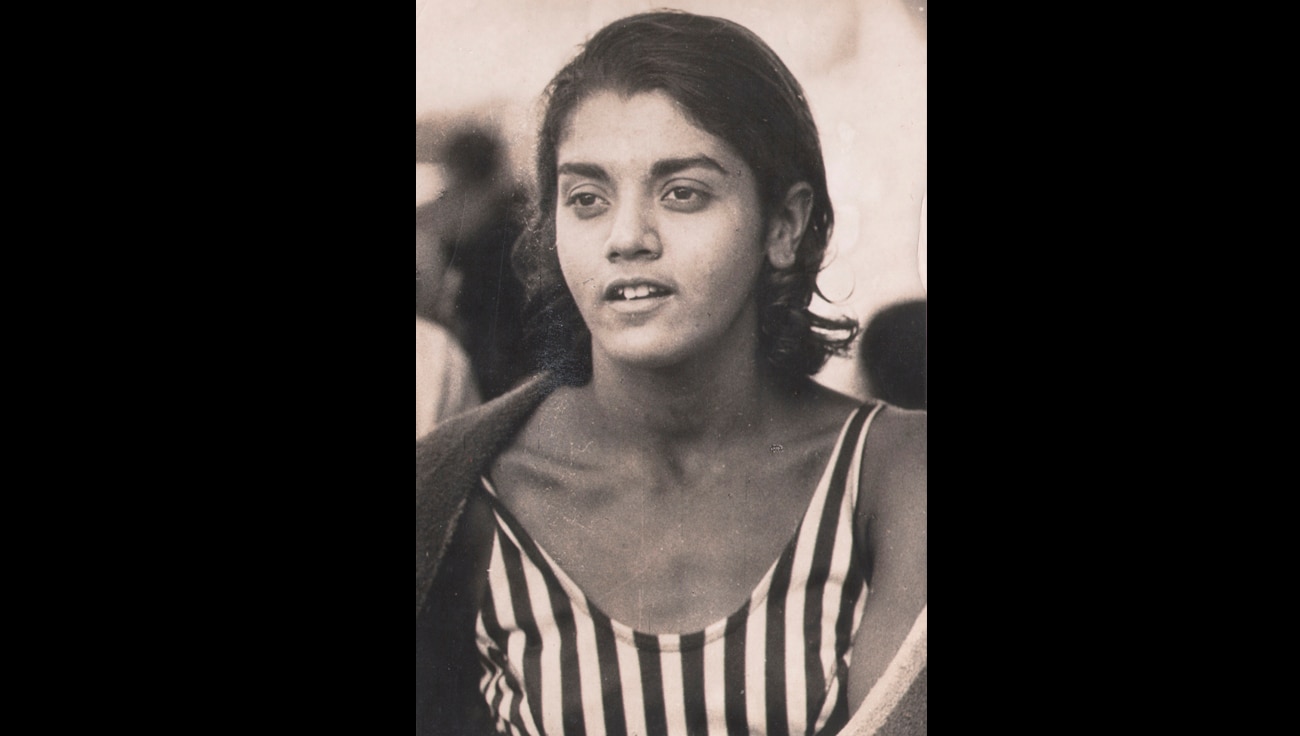 Our lives revolved around swimming. During the school year, we worked out once a day in the evenings. Lee would pick us up at the club on his way home from work and Margaret would be waiting with dinner. Unused to such rigorous training, in my first months there, my arms ached so horribly that I could hardly lift the fork to my mouth. On most weekends they drove us to age-group swim meets, cheering us on, rejoicing in my improvement as they did Jodi’s, and commiserating when there wasn’t any. Although Ken was no longer my coach, he kept in regular touch, letting me know he was there for me should I need his support.

During the summer holidays, we trained twice a day, swimming an average of 6000 meters. It was a gruelling regimen and, although I gained in stamina and speed, I was perpetually exhausted. Yet it was exhilarating to practice with a team, to have constant coaching, to see my times improving slowly but steadily. I still thought of my brother often, but the waves of sorrow that had engulfed me earlier began to recede slowly, lapping more gently against my heart.

I would have loved to stay and train longer, but my year was up, and I had to return home in the fall of 1966. I had grown not only as a swimmer but as a human being, learning invaluable lessons from Ken and my hosts in generosity, love, and kindness. 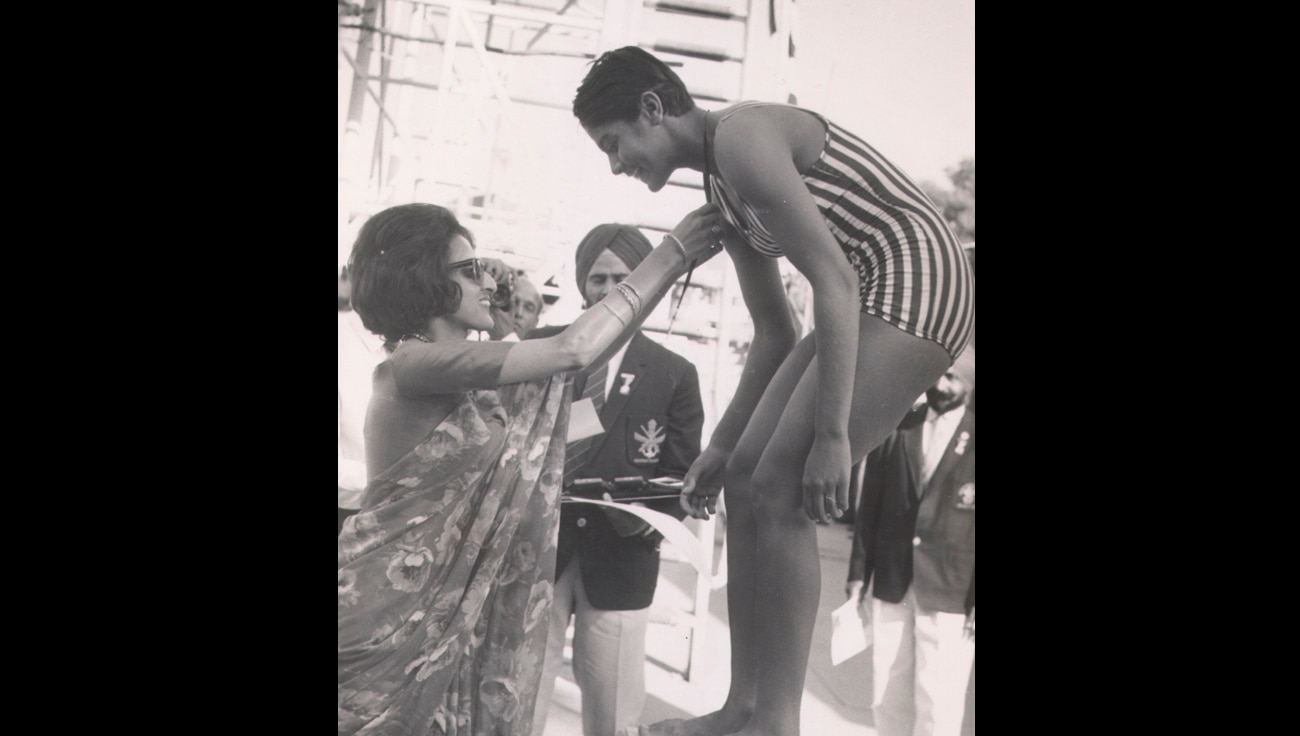 At the National Championship held in Patiala that year, I swept the board, winning and setting new national records in all my five events. In recognition of this achievement, the Swimming Federation of India recommended that I be given the Arjuna Award, the highest sports award in India. I was also chosen as the only swimmer to represent India at the Asian Games in Bangkok in December 1966, and although I did not win a medal, I was proud to have made it into the finals of all my races. 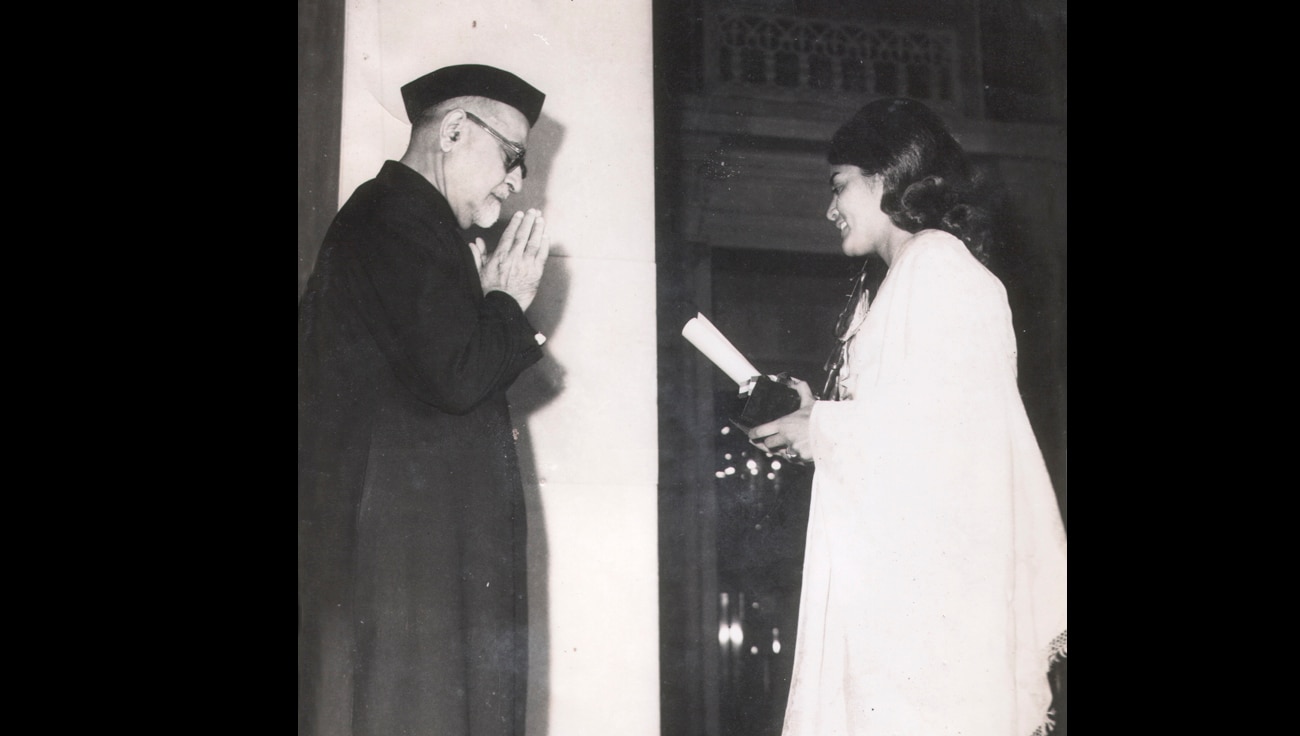 The Arjuna awards ceremony was held at Rashtrapati Bhavan in January 1967. As I walked up to receive the statuette from Dr. Zakir Hussain, the President of India, I did so with a single regret in my heart. I wished I could have had Ken Schafer and the Whitmans at my side to witness that day. Without Ken’s help and unwavering faith in me and the Whitmans’ loving support, none of this would have been possible. It was as much their achievement as mine! 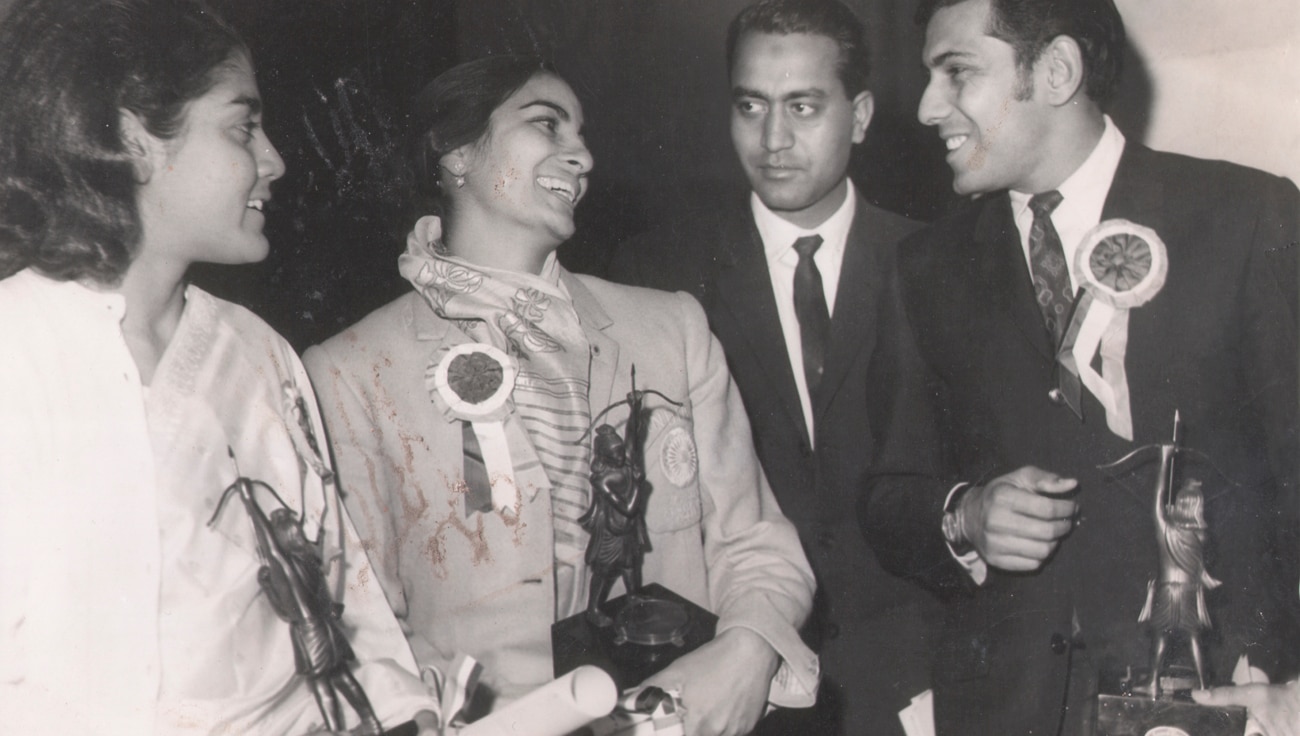 With other Arjuna awardees; Jaideep Mukherjea on extreme right