A simple act of generosity can be one of the most rewarding experiences in life. Here are some life-altering experiences of people who are committed to a life of giving. 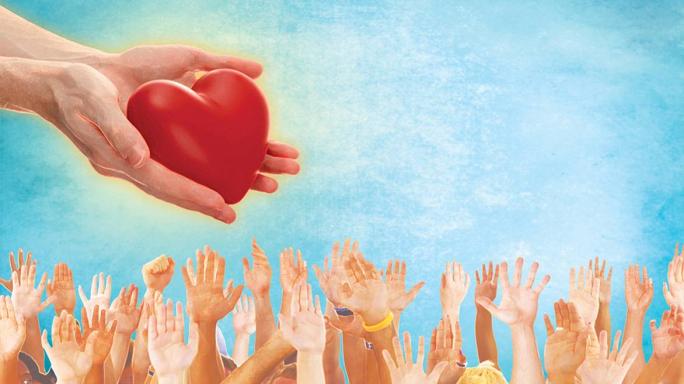 What makes a young student initiate a collection drive for a retirement home? Why does a college professor start a fundraiser for needy patients? What does an ordinary railway employee get by creating a registry of blood donors? A sense of joy and fulfilment and a more optimistic outlook on life. Knowing that they are able to make a difference and bring a smile to someone's face improved their confidence. And, they experienced a change within and felt deeply rewarded each time. Here, some life-altering experiences of people who are committed to a life of giving.

"I FEEL BLESSED AND CONFIDENT"

For 18-year-old R. Rajeshwari, it all started with a collection drive of a fistful of sugar during DaanUtsav [a campaign that encourages giving] in October 2017. Then a school student, in Chennai's Royapuram, she was a member of the Confederation of Arunodhaya Children Sangam (CACS)--a programme initiated by Arunodhaya Centre for Street & Working Children--when she and her friends decided to ask people in their slum in Tiruvottiyur to donate one cup or a fistful of sugar. Their idea was to donate the contributions to shelters and retirement homes in the area. The experience changed Rajeshwari's life. You do not need a treasure trove to give. The desire to share is what counts the most, as 36-year-old Dr Anup Naha, chief coordinator, volunteer services, Manipal Academy of Higher Education, discovered. The very act of giving convinced him that one does not need a lot of money to help someone in need. He says, "Coming from a very middle-class family, I could hardly think of giving during the initial years of my college life. However, in my last days of college in 2006, I visited the neonatal ward of Kasturba Medical College, Manipal, where I witnessed many infants dying, as their parents could not afford the cost of treatment. I decided to raise funds for them and messaged my school friends, requesting help. With their quick response, within three days I collected Rs 25,000, which was used to support the treatment of three kids." For Naha, a life-long commitment to giving had begun.The ability--and willingness--to give makes one aware of one's own strength and boosts one's self-esteem. When Rajeshwari and her friends collected more than 80 kg of sugar and distributed it at a few shelters, such as Monegar Choultry and Missionaries of Charity, Royapuram, she felt like a new person. "My self-confidence is way higher today and I owe it to this experience," she says.

"I FEEL LESS MATERIALISTIC AND A BETTER PERSON"

Altruism reveals facets of our character that may have been gathering dust under the rigours of daily life. For Khushroo Poacha, 51, charity was a habit while growing up. This, despite his mother's struggle to raise him and his brother single-handedly after the demise of their father. A clerk with the Central Railways, Nagpur, he imbibed the passion for giving from his mother. Over the past 20 years, he has been running a charity that feeds the hungry and created a registry for blood donors in Nagpur. "The most significant outcome has been realizing that one needs very little for a comfortable life. I have become quite unmaterialistic and never felt I am missing out on anything. My wife and I don't worry about the future (whether we will have enough)," he says. He feels abundantly blessed to be able to give back. "The opportunity to serve is wonderful because it makes me a better person each time," he adds.The intrinsic act of selfless and mindful giving invites abundance from the universe, Poacha believes. Corroborating this is Mumbai's 57-year-old Umesh Asher, the founder of Vendiman-a vending solution. "I have become less materialistic and more grounded now. I feel like I am on a spiritual path," he confesses. According to Asher, when a stranger he met outside his house regularly thanked him for making it a point to enquire about his family's well-being, he felt validated. "I now try and ensure that the 'invisible' people in our lives are not treated as such and we recognize and acknowledge their role in our existence," he says.

"I SENSE HOPE FOR THE FUTURE"

When Naha started lending a helping hand, he started with a meagre amount. However, when he, along with his friends, raised funds for sick, underprivileged children, he concluded that "if we have the will and take the initiative to help people, then the resources will work out". And that is exactly what happened. The experience also led him to believe in the potential of young people. "When I joined the faculty at Manipal, my aim was to motivate students to serve the underprivileged. This led to the creation of Volunteer Services Organization, the university's social unit, where we involve hundreds of students on weekends to come forward to give and become a responsible citizen," he explains.

"I AM MORE EMPATHETIC AND COMPASSIONATE"

Lucknow's Rahul Aggarwal, a chartered accountant, worked in multiple corporate houses until a chance interaction with a member from a low-income group he was helping fill some forms, made him understand that there was no point in leading a self-centred life. He says, "Life has to be more meaningful. All of us have the seeds of giving back, within us. There is no point living a life just for oneself." True to his words, Rahul, who is in his 30s, soon started an NGO-Swatantra Talim-that works with children to provide them an education. For Bhubaneshwar-based businessman Bipin Mohanty too, life has moved on from being just about business. "I feel my perspective has changed," says the 50-year-old. "Earlier profit was the only motive when talking to a client. Today, I am able to look at a client and ask myself what does this person really need, irrespective of whether it makes the best business sense to me or not."

Now that's what you call the transformative power of giving! All it takes is a large heart and the intent and awareness that helping someone selflessly is the biggest proof and blessing of humanity.