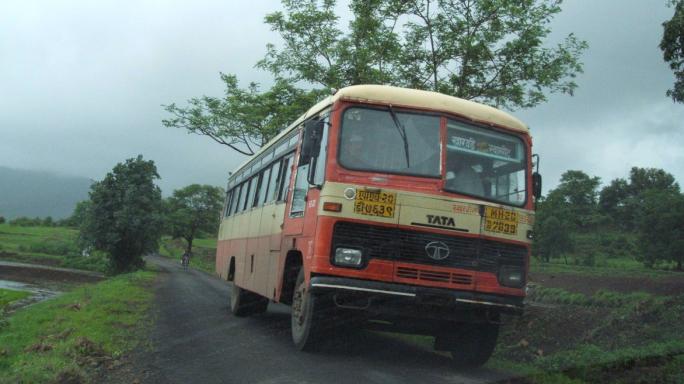 I was travelling on an overnight bus from Kolhapur to Aurangabad in Maharashtra. This was way back in May 1972, when I was still in college. The bus—an ordinary, non-air-conditioned one—was more than packed; all 55 seats were occupied and there were some 20 people standing in the aisle. The muggy day added to the discomfort of the bumpy, 10-hour journey. Because I was travelling on a student concession pass, I could not claim a reserved seat. I had no option but to stand—quite uncomfortably.

The bus started its journey a little later than scheduled. The passengers seated comfortably by the windows wore happy expressions as they looked at the outside world, the breeze kissing their faces. The people seated by the aisle cursed the standing ones, who had no option but to occasionally lean on the seat corners. The air inside was hot and filled with strange, unpleasant smells.  Some enthusiastic travellers had carried small transistor radios with the futile hope that they would be able to listen to some music on the way.

After around two very long hours, I was beyond exhausted and bored. I kept trying to balance myself, shifting my body weight from one leg to the other to manage the discomfort. Another long hour, drenched in the noise and shaky rhythm of the bus, passed by. I suddenly sensed a soft hand tapping my elbow, asking for attention. Turning around, I found a middle-aged man with a kind smile looking up at me. He suddenly stood up and said I could take his seat for some time. I was pleasantly surprised and immediately accepted his offer, my entire body heaving a sigh of relief. The man, whose seat I was in, stood next to me, looking around in amusement. After about 20 minutes, I signalled him to take back his space. A man, who was sitting by the window on the other side of the bus, had observed our exchange.

Just then, something magical happened. Our observer spontaneously stood up and offered his seat to another standing man. Out of the blue, we had triggered a chain reaction: This game of seat-sharing spread through the bus like wildfire and, before long, almost all the standees got a chance to be seated. People even started chatting with each other while exchanging positions, and soon began sharing jokes and singing. Needless to say, the rest of the journey was quite enjoyable.

The bus reached its destination in the early hours of the morning. The groups quickly dispersed and went their way. But this extraordinary experience has stayed with me even after all these years. It revealed to me an important fact—that we can all share what we have, including our burdens, and help our co-passengers in this journey called life.

Do You Like This Story?
50
1
Other Stories
Please enter valid text
Must Reads
Latest Issue