The Cop With A Golden Heart 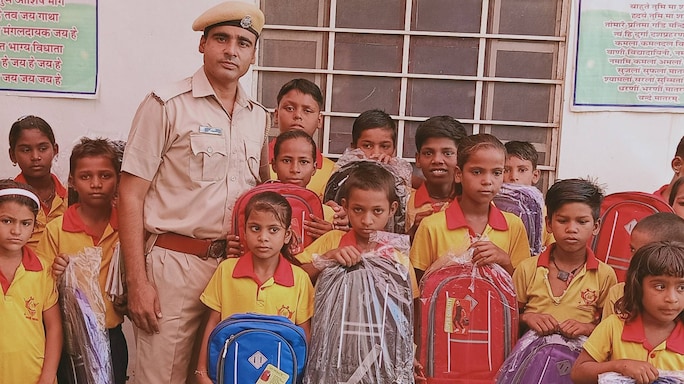 Dharamveer Jakhar, a 35-year-old Rajasthan police constable is the toast of Churu town, thanks to his school for the homeless called 'Aapni Pathshala' (Our School).

Jakhar says he first thought of starting a school when he came across a few children begging near the police station he was posted in. "I asked them why they were not in school and some of them said that they were orphans and nobody cared for them,” Jakhar told RD.

Jakhar decided to step in. He started the school near a women's police station in Churu, with the policewomen posted there helping him. Since January 2016, the school has grown to accommodate around 450 students.

To encourage students from far away areas to attend, a donated van has been arranged to ferry them from their homes. The school also provides uniforms, food and study materials for free.

Was his family—wife, mother and a young daughter—supportive when he first started the school spending out of his pocket? With a laughter, he says, “They were not entirely happy. I was spending money from my salary and they were concerned that I would be stretching myself. They were probably right in thinking so. I must say that they made some sacrifices because of me.” And are the family members happy now? “They are very happy and very proud of me,” he says.

There has been a steady stream of high-profile visitors to the school, with higher-ups in the police department and local politicians encouraging him. Even national-level political leaders like the former chief minister of Rajasthan, Vasundhara Raje, and Congress party leader Rahul Gandhi have lauded him for his job.

The going hasn't been very smooth though. "We spend around Rs 1.5 lakh for the school. I don’t earn even half that money. We get small contributions but they are not enough. But we will keep doing our best so we can make the future of these children secure," he says. We wish him the very best in his efforts.

If you wish to donate to this effort, please write to aapnipathshalachuru@gmail.com.