Singh set up base at the checkpost bordering Uttar Pradesh, right next to a stream, two kilometres from the Rarah Community Health Centre of the Bharatpur district. His task was cut out—stop and examine all individuals entering Rajasthan through this crossing 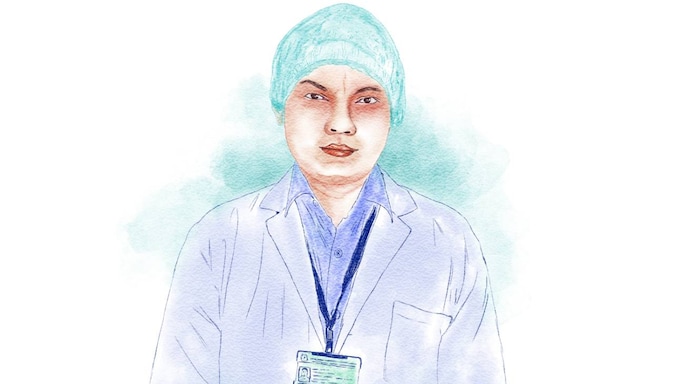 These days, whenever Dr Rajveer Singh, 40, steps out to test people for COVID-19 symptoms, he is covered from head-to-toe in PPE. But just a few months ago, when he first started, he was equipped only with his doctor’s coat, a mask, gloves and a large bottle of sanitizer, while dealing with hundreds of potential coronavirus-carriers for hours.

“I look back now and feel that I could easily have been infected. But, when a war is declared, you fight with what you have; you don’t bleat about the lack of weapons,” says Singh, talking about the early days of PPE shortage. His war analogy comes as no surprise: His father is a retired policeman, one of his brothers is an army officer and the other is in the paramilitary.

By the end of March, Rajasthan was on edge. Bhilwara had been declared a ‘COVID hotspot’ and the panic spreading across the state was real. Migrants, it was feared, would only complicate the situation. The onus was on people like Singh to detect potential carriers among the thousands surging into the state. “I knew the importance of the work we were doing, and felt it was a huge responsibility,” says Singh, a soft-spoken Ayurveda doctor with the Rajasthan health department.

With the local police playing an important role in controlling crowds and directing them to him and his colleagues in an orderly fashion, Singh says that their role was crucial in those first few frenzied days. “The locals jumped in too, distributing food and masks to people who had walked for hundreds of kilometres,” he recalls.

Singh set up base at the checkpost bordering Uttar Pradesh, right next to a stream, two kilometres from the Rarah Community Health Centre of the Bharatpur district. His task was cut out—stop and examine all individuals entering Rajasthan through this crossing. During the first weeks, as thousands of migrants from across the north streamed into Rajasthan, Singh would sit under a large tree, behind a squarish table, with a register and a pen in hand, from eight in the night until eight in the morning. “My job was to get a brief medical history, ask them where they were coming from and their destination,” he says. This was done to analyze whether or not they may have been exposed to the novel coronavirus. Scores were tested to find out if they had high temperatures and other COVID-19 symptoms.

Singh believes that the best way to deal with an issue is complete honesty so that is exactly what he requested from the anxious migrants. “I told them about the dangers of the disease and asked them to answer my questions truthfully, as part of their patriotic duty. Even a single infected person could endanger hundreds more. So the details were important,” he says. The process started two days before the country went into lockdown and health officials scanned busloads of people crossing into the state, educating them about the dangers of COVID-19. When the state changed gears, Singh continued to lead the charge and is still managing on-ground testing efforts in the district’s villages. “I have to donate my time and energy as this is a worthy cause,” he says, reiterating his commitment.

Singh says that he has not been able to visit his family for weeks. “I would visit my wife and son, who live with my parents, every weekend, but I couldn’t do that for three weeks. But, they understand the significance of what I am doing,” he says. It is because of the diligence and dedication of unsung heroes like Singh that many of us are safe today.