The Arrow That Saved My Life-Twice

After a freak backyard accident almost kills her, a Texas woman is taken on a miraculous medical journey

Editor's note: After we published The Boy with the Spike in his Head about a 10-year-old boy who survived a harrowing head injury caused by a skewer, we received a letter from Donna Barbour. Barbour had her own story to tell, and she assured us it was every bit as frightening—and perhaps even more miraculous. She may be right.

It was a warm April evening, and I had returned home from work about an hour earlier. As I often did after a long day, I went straight to my backyard and did some work in my flower garden before deciding to light the grill to make dinner for my husband and myself. I had only just walked a few steps on the patio when I suddenly felt a horrifying blow to the right side of my neck. It felt as though someone had hit me with a baseball bat. I knew that no one was in the yard with me, so no one could have hit me. Totally confused, I reached up and, to my shock and horror, realized that I had been shot—with an arrow.

I grabbed the arrow with a death grip where it had pierced my neck and ran inside, screaming my husband’s name. Ed was in the back of the house talking to our daughter, Keila, on the phone. He dropped the phone and ran to me. Ed grabbed me by the shoulders to stop me from running and told me to lie down on the couch. Then he went to call 911. I lay there and prayed. I didn’t know if there was any way that I could survive.

The next hour or so was a crazy, jumbled mix of events. The arrow had come from a young man practising with a compound bow, used for hunting, in his backyard. Luckily, he was using a practice arrow, which is smooth and rounded; a broadhead arrow for hunting would have killed me. He lived across the alley and was shooting to the north. The arrow had ricocheted and turned back to the south. It went over two, possibly three, fences, through the shrubs and an oak tree, between two large hanging baskets and into my neck as I walked across the patio. A shot from a compound bow can travel up to 200 miles per hour, or 300 feet per second. 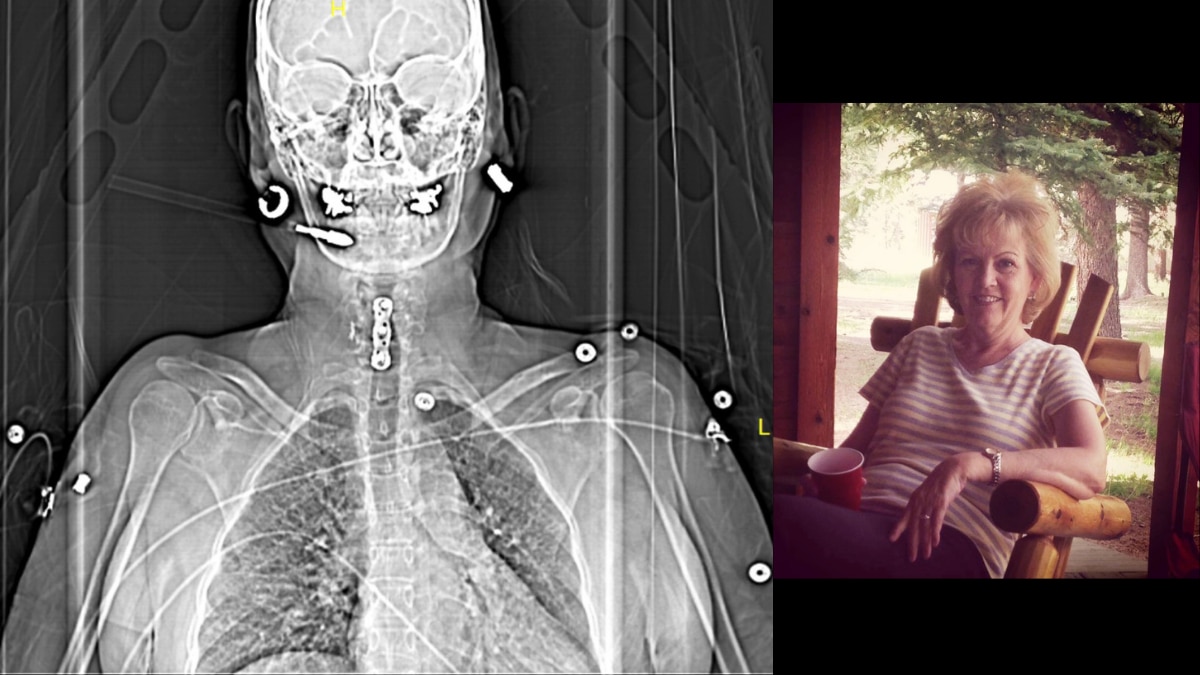 Barbour after surviving the accident (right), and the scan showing the arrow penetrating her neck (Photos courtesy Donna Barbour)

We had EMTs who were simply wonderful that evening. As they entered the house and sat down beside me, they were perfectly calm and totally focused. They called for help from the paramedics and for a medical helicopter from Amarillo, Texas, which is about 105 kms away and the closest city with a trauma centre.

As the helicopter lifted off to take me to Amarillo, I felt complete peace. I had seen the large number of people outside my house, and I knew that the Lord was being bombarded with prayers on my behalf. I felt certain that everything would be fine.

At the hospital, family and friends were gathering. I tried hard to re­assure them. I kept telling them I was OK, but the looks on their faces told me that they weren’t buying it. It was a difficult job since I had an arrow sticking out of my neck!

Soon, they took me back for a CT scan to determine the location of the arrow on the inside. The doctors and nurses began telling me how lucky I was. The arrow had gone between the carotid artery and the jugular vein. That space between the two is a quarter of an inch or less. The diameter of the arrow is larger than the space it went through. It actually pushed the artery to the side—without nicking it. There was no bleeding at all. Although I didn’t realize at the time how truly incredible this was, I began arguing with them that I wasn’t “lucky”; I was “blessed”! This is an argument I have continued to wage ever since.

As I was being taken back to surgery to remove the arrow, my family entered a waiting room full of ­people—in fact, there were two waiting rooms full! Someone told my son, Kyle, that there was a post on the site texasbowhunter.com asking for prayers for me. It turns out a friend had called her son, who is a bowhunter, and told him about the accident, and he had posted the prayer request on that website.

The morning after my two-hour surgery, with my family all gathered in my room, a couple of the doctors came by to see me. After they left, the surgeon came in. He checked the wound and talked to us about what he had done. Then he told us something that rocked our world again.

He said that the CT scan had revealed that I had a brain tumour. I remember going a bit numb but thinking, God works in mysterious ways! The surgeon said they were almost certain the tumour was benign, but it was located in a very difficult place. I was stunned, of course, but I felt like it was God’s plan for me to find it.

A few days later, I went in for a second opinion from another neuro­surgeon. He said that it was a difficult surgery but that it had to be done. The tumour was about to cross the midline of my brain, which would have resulted in a massive stroke.

The brain surgery was successful, and in less than a week I was back home. I was discouraged and feeling horrible. I had lost a lot of blood from a bacterial infection, Clostridium difficile, and was extremely anaemic and weak. I was beginning to have symptoms of post-traumatic stress dis­order, hearing the swoosh and then the thunk of the arrow. Thankfully, that didn’t last too long.

All my adventures had taken a toll, and I needed a time of healing and rest. All was uneventful for a couple of years. I continued to tell people that I was not lucky; I was blessed. I had an MRI each year to make sure that the tumour was not growing back. But, in 2015, after I had my MRI, the doctor’s office called and told me that I needed to come back in to see them. 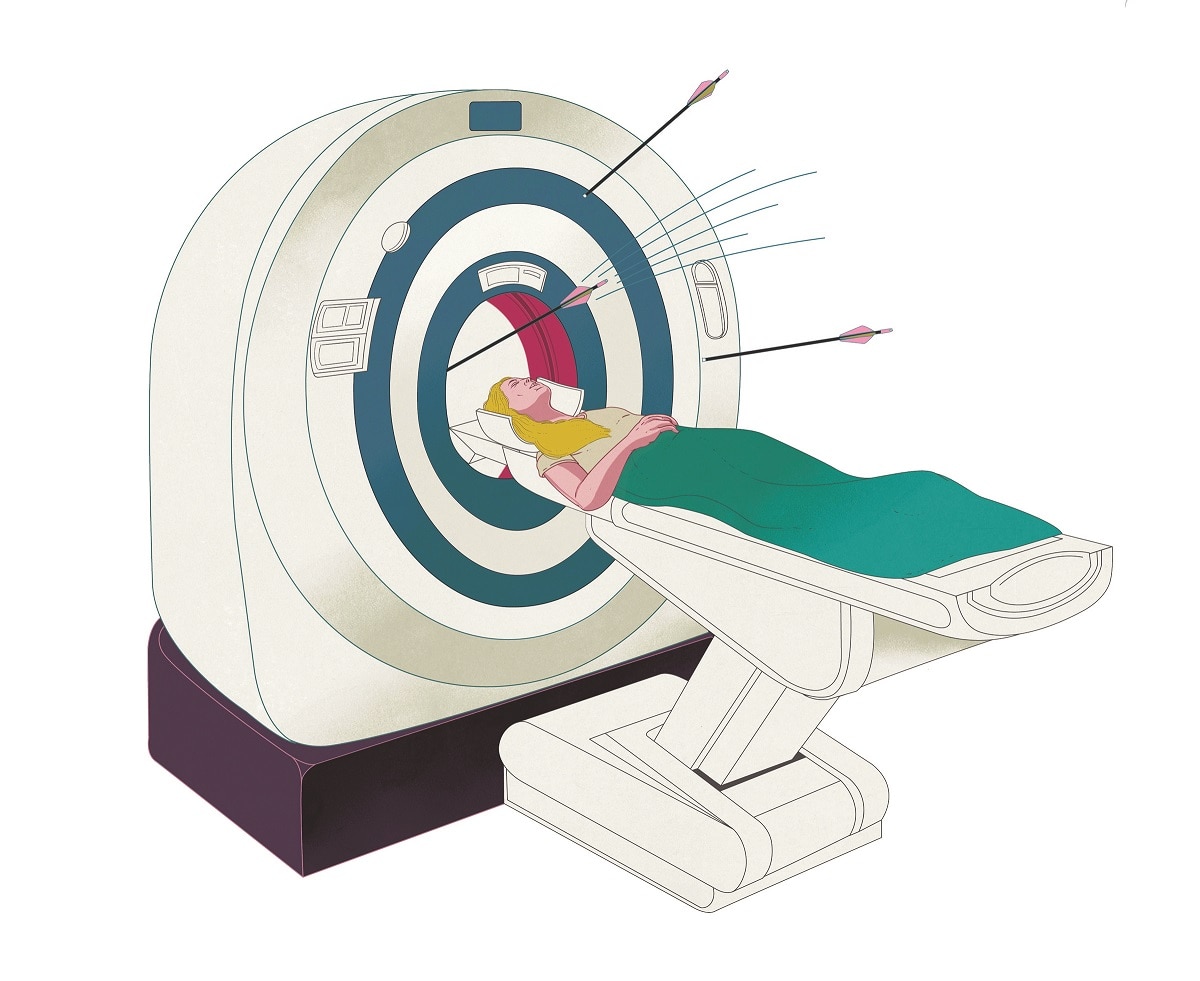 The doctor explained that there was still no sign of a tumour, but they had found a brain aneurysm. Normally, aneurysms aren’t discovered until they rupture, and that is almost always too late. Again, I was facing uncertainty and dreading brain surgery. I simply do not know how people go through times like these without the Lord, and the peace that comes from knowing God is in control.

In the weeks before the surgery, I felt at peace with whatever the outcome would be. We went to Dallas for the procedure. They found it was a very fragile and difficult aneurysm, covered with blisters and on the verge of rupturing, but the doctor successfully clipped it.

Had it not been for that arrow, I would have died from a brain tumour, a stroke or an aneurysm! And honestly, the arrow should have killed me. But it didn’t.

For weeks and weeks, everyone gathered around me when I went to the grocery store or the post office. People would stop and hug me and even cry, saying how happy they were that this had happened. It strengthened everyone’s faith.

Coincidences? Luck? I think not. The gentleman who wrote the last comment on the prayer-request thread on texasbowhunter.com summed it up in just two words. He simply wrote, “Amazing grace.”

Do You Like This Story?
38
2
Other Stories
Please enter valid text
corona updates
Must Reads
Latest Issue