Swept Out to Sea

A scuba dive on a wild, starless night quickly became a fight to stay alive When her alarm rang on 12 January 2021, Oksana Samkova rolled over and looked out her bedroom window to check on the weather. She had been taking an advanced diving course, and that evening she was scheduled to go out on a night dive at Port Noarlungain the St. Vincent Gulf, 30 kilometres south of Adelaide, Australia. Instead of the calm, sunny days she had hoped for, what she saw was grey, blustery weather—with the wind so strong it was sending her outdoor furniture flying.

A little panicked, the Ukrainian-born registered nurse called to find out if her night dive had been cancelled.But she was assured that the weather would settle down and that the dive would go ahead.

That evening at sunset, around8:30 p.m., the group of eight divers and two instructors gathered at the Port Noarlunga parking lot for the pre-dive briefing. It was here where they would be paired up with their ‘buddies’, go through their signals, and make sure everyone had all their equipment.

It was still windy, and the ocean was wild and choppy. The tide was high, and the reef that runs parallel to the shore at the end of the 300-metre jetty, where the group was to enter the water, was being pounded by waves. On a normal Januaryevening (midsummer in the southern hemisphere), the area would be buzzing with people fishing off the jetty and families having dinner on the beach.Tonight, the divers were all alone.

Oksana’s skin tingled with apprehension—she had a gut feeling that she shouldn’t dive. When she realized that she had only one flashlight with her instead of the required two for a night dive, she spoke to the instructors. They told her that was fine since her dive buddy had two. And, aware that Oksana was nervous, they also assured her that once they had submerged, away from the choppy surface, the water below would be calm.

Oksana, a single mother, had moved to Australia with her two sons five years earlier to live the life she'd dreamt of, and scuba diving was part of that dream. So she put on her new diving gear: a wet suit to keep out the cold South Australian water; a regulator and oxygen tank; and a black buoyancy control device (BCD) that has pockets for weights.

She’d dived only a few times in her new equipment, and was still modifying the amount of weight she needed to descend. On a previous dive on a calm, sunny day, her instructor thought she was too heavy in the water and told her to remove some of the weights from the pockets of her BCD.

Tonight, before heading for the water, her flashlight strapped to her leg, Oksana did something she’d never done before a dive. She took a selfie. If something happens to me, this will be my last photo, she thought. Then she dismissed her thoughts as rubbish. Most of Oksana’s diving gear was black, which made her all but invisible during the nighttime dive.PHOTO COURTESY OKSANA SAMKOVA

With the wind still gusting, the divers walked towards the end of the jetty,where they were to jump from its steps into the churning black water below.By the time they reached the steps, it was quite dark. I don’t like this, Oksana thought; she couldn’t help herself.But this was part of her course, and seeing most of the group in the water,she decided to push on. Oksana asked the few divers still on the jetty to wait until she was in the water before they jumped in. She didn’t want to be last.

With mask and fins on, regulator in her mouth and a little air in her BCD,she descended the steps, closed her eyes and dropped into the sea.When the whole group was in the water and ready to descend, the divers started releasing the air from their BCDs. Typically, doing so allowed them to descend vertically, feet first, but Oksana was having trouble. She didn’t have enough weight in the pockets of her BCD, so she couldn’t get down through the tumultuous surface water.Again and again she tried to descend,only to find herself bobbing back to the surface. Each time she resurfaced, she was more out of breath and her heart was beating faster.

Clouds obscured the moon, and the water was jet black. The only light came from the jetty. Oksana reached for her flashlight, which was not very strong;it was intended for seeing fish and identifying herself underwater. Still,she shone it towards the jetty. That’s when she realized a rip current had been pulling her away from the jetty and the other divers, who were now well below the surface.

She tried descending once more, to get below the current, but again, she couldn’t do it. Adrenaline was coursing through her veins, making her tremble.Oksana was overcome by panic and began hyperventilating through her regulator as the rip current pulled her northwards, away from the jetty and parallel to the shore. She began inhaling sea water.

But then her instincts as an emergency-room nurse kicked in. At work,Oksana was routinely exposed to other people's trauma, and she also taught frontline workers strategies for dealing with it. That night, gasping for air all alone in a dark sea, and coughing up water, she subconsciously began to put what she knew into practice. In short, she began to think strategically and practically.

She noticed that each time she bobbed up to the surface after another failed attempt to descend, she could see the shoreline and the headland beyond it, a little further ahead at the end of the beach. She also saw that the jetty was now about 500 metres away and there was no way she could get back to it. So Oksana decided to try to reach the shore.

But fighting a rip current is tough at the best of times; for Oksana, loaded down with heavy diving gear, it was impossible. She was unable to swim out of the current—and was steadily being carried towards the headland.

Given the foul weather, she knew it was unlikely someone would be on the shore to see the light she was flashing on the surface of the water, but she did it anyway, hoping with all her heart that there was.Oksana had no idea how long she’d been in the water, but the current hadn't let up, and she was now about a kilometre-and-a-half from the jetty.

To save the little air left in her tank,she abandoned any more attempts to descend, and just let the current take her. I’ll try for Christies Beach, she thought; she knew that was the beach past the headland. Still shining her faint flashlight towards shore, she hoped her dive group was looking for her.

But once Oksana made it around the headland, the swell was even bigger. Two-metre waves crashed over her, pummelling her like a punching bag. Swallowing water, coughing and spluttering, she was terrified and totally exhausted. Then the rip current changed direction. It was now pulling her further out to sea. This can’t be happening! she thought.To preserve what little air remained in her oxygen tank, Oksana took the regulator out of her mouth and replaced it with her snorkel, then inflated her BCD to its maximum to better stay afloat.She was now about one kilometre from the shore and five kilometres from where she started.

With a black wetsuit and a black BCD, the only chance Oksana had of being found on that dark, starless night was her flashlight. Suddenly she heard beeping. She knew what it signified: Her flashlight had stopped working. “YOU CAN’T DO THIS TO ME!” she screamed at it.

She pushed the on/off button and,incredibly, it came back to life. To preserve the battery, she turned it to the lowest setting. Oksana didn’t know how long the flashlight would last,she’d practically run out of air, and she was nowhere near the beach. Any fight she had left was draining away. 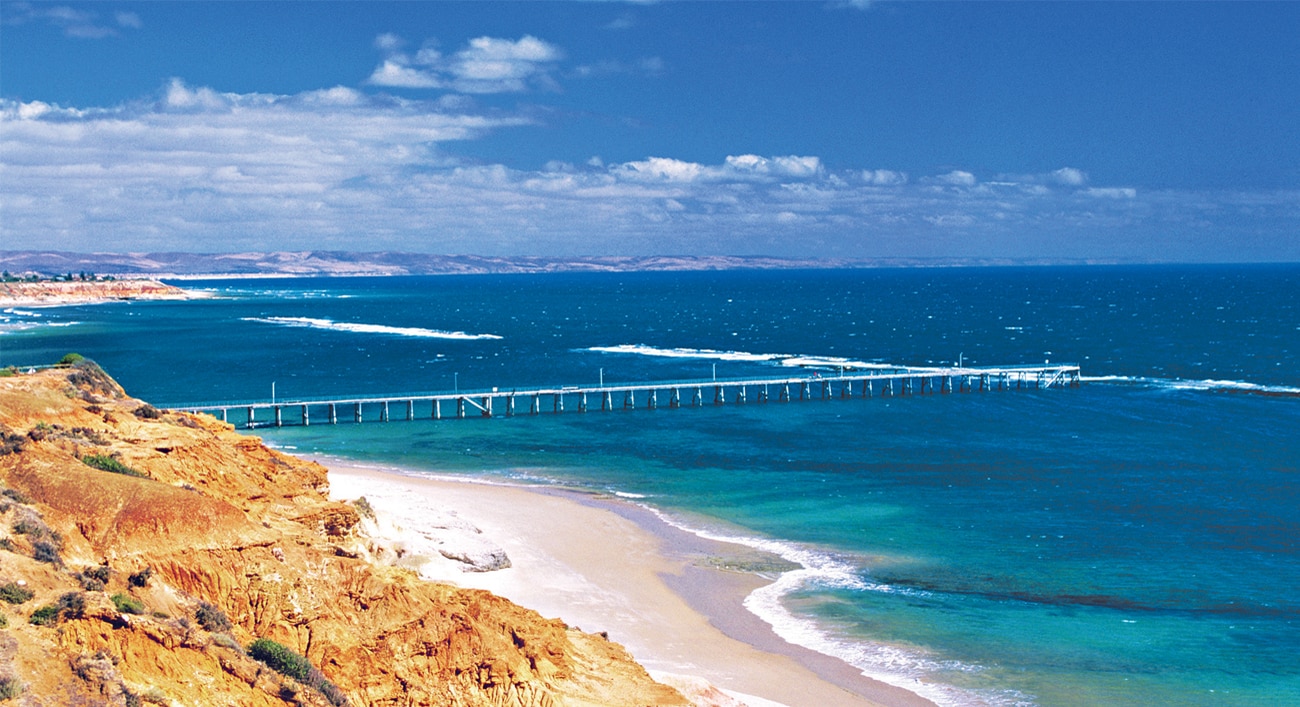 Port Noarlunga reef, south of the city of Adelaide, is a popular spot for scuba divers. They access the reef from the end of this 300-metre jetty.PHOTO: ©GETTY IMAGES

Her thoughts turned to her sons, aged 15 and 12. She rallied the last of her strength to keep going. All she wanted was to survive and to see her boys. Gasping for air, she told herself to breathe steadily. Oksana shone the flashlight towards shore; it failed again.She pressed the on/off button over and over until the light reappeared.

Drifting even further out to sea,Oksana saw a blue flashing light on the shore. She had no idea what was happening there, but she desperately hoped it was for her.

Then she saw a light on the water. Maybe they’re coming for me, she thought. Frantically she waved her faint light. Suddenly, a bright light appeared in the water. Turning her head, she saw a boat. She had been found. She would get to see her kids again.

Volunteers with the South Australian Sea Rescue Squadron threw Oksana a life ring, which she held on to with all her remaining strength, and they pulled her on board. “It was the happiest moment of my life,” she says now.

The volunteers took her heavy gear off in the boat, and helped her ashore. She could barely walk, coughed continuously and was having a hard time breathing.Then came a round of concerned questions. “They wanted to know how long I'd been in the water,” she recalls, “but I didn’t know. I asked what time it was,and they said almost midnight. I’d been in the water for more than three hours.”

She learnt later that when her dive group realized she was missing, they searched below the water, on the jetty,and in the parking lot. When they couldn’t find her, they called emergency services. A police officer went to the headland and, looking out to sea, saw a faint light moving towards the next beach. He radioed in the information.

Paramedics took Oksana to hospital where an X-ray revealed that her lungs were close to collapse because of all the water she’d inhaled. She stayed there for two days and received oxygen therapy to strengthen them. Oksana was in hospital for two days. There, she received oxygen therapy for her weakened lungs.PHOTO COURTESY OKSANA SAMKOVA

The reality of her ordeal hit her only when she was reunited with her sons.“I had thought I might never see them again,” she says.

One month after her near-death experience, Oksana got back in the water. “I wanted to dive again. I knew if I didn't do it soon, I never would,” she says. “Now, I dive with more weight. And the weather needs to be perfect.”