A lovesick teenager gets the girl—40 years later 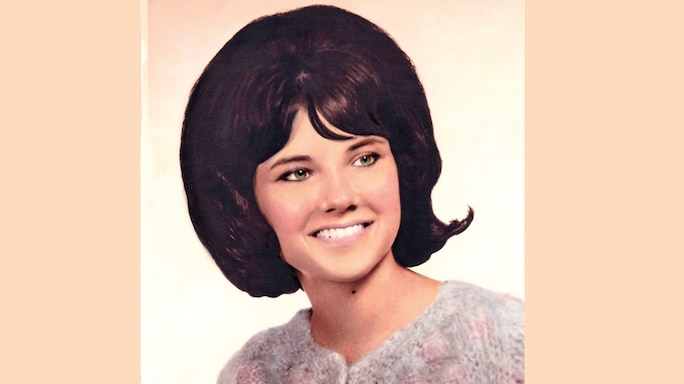 One early January day in 1999,51­year­ old Georgene Martin, née Huber, received a delivery of red roses. Her husband had recently passed away, so the flowers didn’t seem completely out of the blue. But the name on the note that came with them did. The last places he had seen that name, Jerry Zimmermann, was in her high school yearbook—from 1965.“Dear Georgene,” Jerry’s card read,“I was a classmate of yours, though I don't believe you knew who I was.I was painfully shy, and you were the prettiest girl I had ever seen”.

It was true that Georgene hardly remembered Jerry. Nearly four decades had passed since their paths first crossed in the hallways of Farnsworth Junior High School in Sheboygan,Wisconsin, where she still lived.

“Though I now live in D.C., I keep close ties to Sheboygan”, Jerry continued. “I return several times a year. And now to the crux of this letter—I will be visiting the weekend of May 15th, and I’m wondering if we could meet for a coffee? I am, however, sensitive to the recent loss of your husband. If this approach comes too soon,I will understand—and wait another 40 years.”

Why not? Georgene thought to herself as she put down the letter. She was certainly curious to see whatJerry looked like after so many years.If nothing else, it would be nice just to chat with him. She wrote back and agreed to meet with him that spring.

In Washington, D.C., Jerry anxiously checked his mailbox each day. When Georgene’s reply came, he was elated. She finally said yes! George didn't know it, but she had broken Jerry’s heart all those years ago.

Jerry’s interest in Georgene Huber began when he noticed her in the ninth grade. Her sparkling eyes gave him a euphoric jolt whenever they glanced, albeit fleetingly, at him.Jerry’s shyness prevented him from saying a single word to her until their junior year in high school.

A newly minted driver, Jerry was on his way to school one morning when he spotted Georgene walking with a friend. Before he could talk himself out of it, he pulled over and asked the girls whether they wanted a ride.They did.

The friends climbed into the front seat, with Georgene sitting next to Jerry. The beautiful girl he had been pining for was sitting just inches away,and it petrified him. Unable to think of anything to say to break the ice, Jerry didn't even introduce himself. Once at school, his passengers thanked him and went on their way.

Jerry spent all day mulling over his next move. His plan was simple:After school, he would drive around until he saw Georgene walking home. Then, just as he had done that morning, he would offer her a ride. She would accept, sit next to him again and that would be that, he thought.Happily ever after.

When the last bell rang, Jerry raced to the parking lot and started driving around the school. He soon found Georgene walking with the same girl from that morning. Jerry pulled over and rolled the window down.“Fancy another ride?” he asked.Georgene looked at him. “No, we're going to walk.”

No? Jerry couldn’t believe it. In his mind, the three of them were already good friends. He slowly rolled the window back up and drove away, devastated.

It only got worse. The following year—their senior year—he learnt that Georgene was engaged. Jerry didn’t dare approach her again.

After high school, Jerry found work making deliveries for an electrical and plumbing wholesaler. He enjoyed the job until he was sidelined by a back injury in 1983. Jerry, then 36,was forced to do desk work, which he hated. A divorce and the death of his father added to his misery.

Then one evening, Jerry opened up the Sheboygan Press and saw an ad for the University of Wisconsin. “Do you want to improve your life?” it asked.Intrigued, he read on. The ad advised a meeting with one of the college’s counselors at the local library. By the end of his meeting, Jerry was signed up for two classes. He wasn’t totally convinced more school would help redirect his path, but he really enjoyed his coursework, and he eventually earned a degree in physical geography.

Jerry soon left Wisconsin for Spokane, Washington, where he worked as a cartographer in the mapping department of the US Geological Survey. He was later promoted to the US Department of Defense’s mapping agency in Washington, DC.

Moving to the nation’s capital was a big adjustment. Jerry, who had been raised on a farm, was accustomed to seeing grazing animals and wide-open spaces. In DC, he found himself surrounded by politics and traffic.  He missed Wisconsin. He called home every week, and he returned at least twice a year, for his birthday in July and again at Christmas.

“Usually one of those times,” he says, “I’d drive by Georgene’s house,just to get a look.” When he would see her out and about, he still couldn’t work up the nerve to talk to her. Jerry would look in the local phone book for her name. It was always there—beside her husband’s.

Jerry married—and divorced—a second time. Neither of his ex-wives ever knew of his ever-lasting affection for Georgene, though his friends back home did. On one of his semi annual visits, in December of1998, Jerry caught up with his friend Frank Cooper. “Have you seen Georgene lately?”Frank asked.“No, not at all,” Jerry replied.“Her husband died.”

Georgene’s husband had such with it for nearly a year. All that time,Georgene had been his caretaker.

Jerry had to go back to Washington,but before leaving town, he stopped at a local florist. While he didn’t want to seem insensitive to Georgene’s husband's death, he didn’t want to waste any more time. Leaving his shyness behind, he wrote a note to send with the roses. Composing the letter was easy. The difficult part, on that cold winter day, was squeezing all his warm feelings for her on to one little card.

When he got back to D.C., Jerry was already looking forward to his next trip home in May. Once he learnt that Georgene was interested in getting together, he couldn’t wait. He called her that night, and the two spoke for more than an hour. He came home as scheduled that spring of 1999 for a brief weekend visit. At 51, he was finally going on his first date with the woman he’d been infatuated with for more than 35 years.

Georgene’s beauty hadn’t faded a bit. “Her hair was different,” Jerry says, “though she was still petite.” He was slender himself. The first thing Georgene said to Jerry when she saw him was, “Wow, are you skinny!”

It’s perhaps not how Hollywood would have scripted their reunion,but for both Jerry and Georgene,the connection was powerful. While Jerry had longed for Georgene for decades, Georgene had been praying for companionship ever since her husband died. “If you found someone for me,” she used to confide in God,“I would love that.” The two of them had such a great time on their coffee date that they made plans to see each other again when Jerry came back to Wisconsin for a longer visit in July.

Jerry was home for 10 days that summer. He spent every one of them with Georgene. The pair took daily walks,usually in a park not far from Lake Michigan. On their third or fourth outing, they decided to stroll along the western banks of the lake instead.“The waters were blue, the sounds were gold,” Jerry says, “and my heart was there—or our hearts, I should say.

”It was the perfect setting for Jerry to confess the full extent of his feelings. “I’m in love with you,” he told Georgene. Then he asked her to marry him. “It was totally unexpected,” Georgene says, “but I just knew he was the one.” She said yes, and Jerry felt triumphant. He now had two yeses to overcome that no from so long ago. Their two dozen wedding guests received a version of Georgene and Jerry’s love story, 40 years in the making, that Jerry had written. Last year,he shared that story with Reader’s Digest with this postscript: “For several years, things were great. Then I developed a limp. Georgene knew what it was, but I needed to hear it from a neurologist: Parkinson’s disease. It’s now in its advanced stages,but Georgene and I continue to love each other while I battle debilitating symptoms. Moreover, we love the Lord and we’re grateful for what we have together because it’s perfect for us.” Happily ever after indeed. 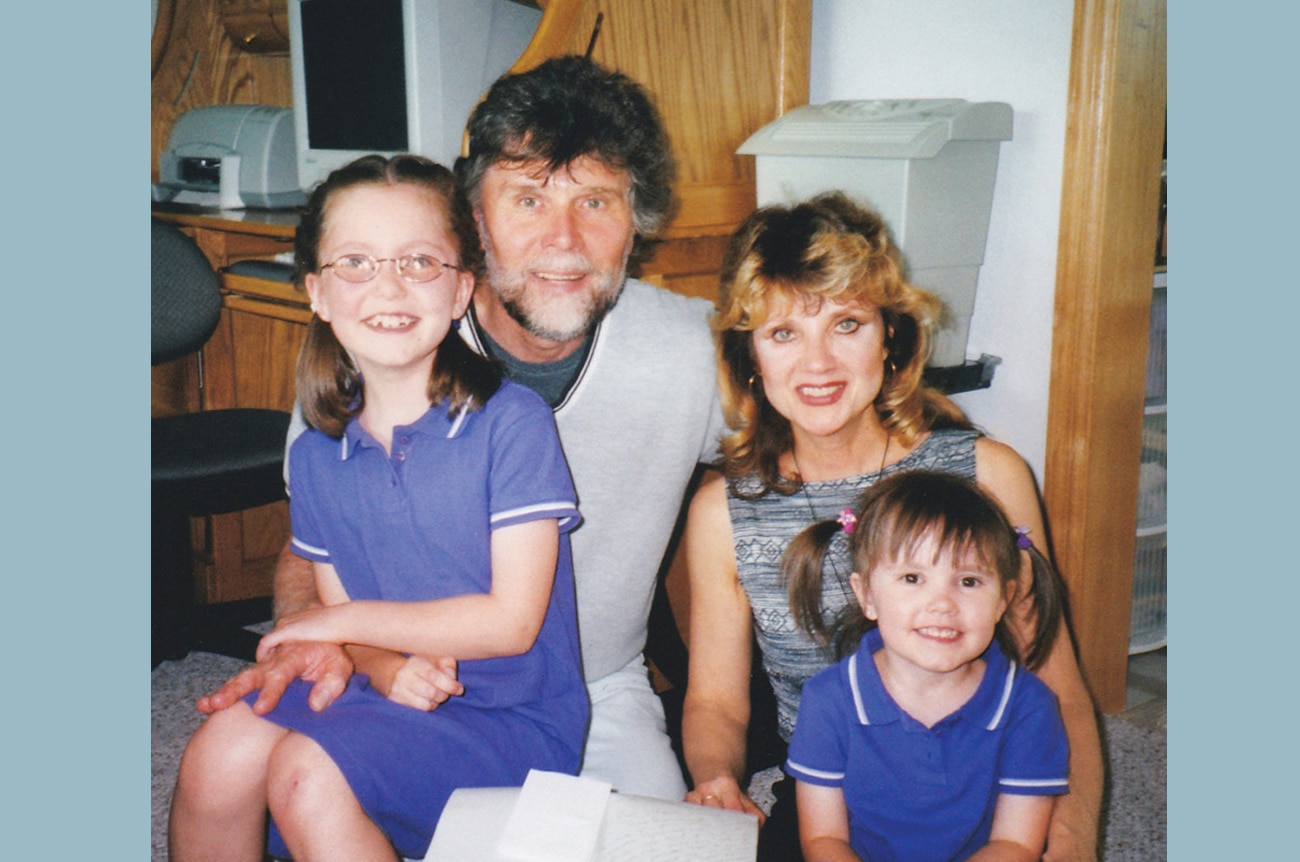 Jerry and Georgene, with their grand- daughters, Hannah (left) and Hope