Seconds To Save Emily

They could never stop the 6,200-ton train in time A dawning sun silhouetted the massive form of the freight train. Loaded with fuel, water and sand for traction, the lead locomotive weighed in at 1,86,000 kilograms—slightly less than a 747 jumbo jet. Even as it idled, conductor Robert Mohr could feel the diesel power rumble through the ground.

Mohr, 49, ran his eye along the 96 cars behind him and, for a moment, recalled why he’d always wanted to be a conductor. To him, there was beauty in the oversized machinery and in having control over such tremendous power.

It was 7 a.m. on 12 May 1998. Mohr had already scanned a dispatch listing hazardous materials aboard the train. “We’ve got some gas with us,” he’d reported to his engineer, Rod Lindley, in the cab.

The presence of liquid propane gas would mean taking extra precaution when braking the 6,200-ton train. With explosive gas on board, a derailment would be disastrous. The rest of the cargo was mainly new automobiles, car parts and coal.

After a final external inspection, Mohr jumped aboard. Slowly the train pulled out of the Decatur, Illinois, depot. They were headed east, into a sun that promised a beautiful day for their 276-km run to Peru, Indiana.

At around noon that day, Tila Marshall prepared to tackle some yardwork. The 34-year-old single mother of four had planned to brighten up the front of her Lafayette, Indiana, home with flowers.

It was a beautiful day for it, she thought, gazing past the houses across the street. Some 45 metres away, just visible through tall, swaying grass, railroad tracks glistened in the sun.

Marshall began working in a patch of soil. Sitting next to her, cheerfully running her hands through dirt, was her 19-month-old daughter, Emily. For a while, she kept turning to check on Emily, who played close at hand. Eventually, though, Marshall’s absorption in her work became total.

Comfortable inside the engine cab, Robert Mohr smiled as Rod Lindley switched on his sideboard heater. The engineer was preparing lunch the way he often did—by using the heater as a stove. “Pork chops,” said Lindley with pride, carefully positioning a lump wrapped in tin foil. “Smoked them myself.”

Mohr and Lindley had 50 years of railroading experience between them, and they had a lot in common. Both had a passion for hunting and fishing, and both liked to swap stories of the outdoors. Even more, they enjoyed talking about their families. As the radio crackled with dispatcher information, they’d laugh over the trials of raising kids.

Mohr and Lindley approached Lafayette at about 1:45 p.m. and slowed the train to the 40-kmph speed limit. Lindley activated his flashing lights and warning bell. The two had been through the city hundreds of times, but they grew extra cautious rounding the first curve.

Ahead, over just 4.8 kilometres of track, lay no fewer than 24 street crossings.

As the train came out of the curve, Lindley noticed a small tannish dot on the right rail about 130 metres ahead. He thought it might be a dog. Although it was against the rules to do so in Lafayette, he began lightly tapping his horn. “Come on, puppy, move,” he urged.

The toots of a train whistle startled Marshall from her garden reverie. That’s odd, she thought. They don’t usually blow the whistle through town. She glanced over to check her daughter, and her heart skipped. Emily was nowhere in sight. While Lindley worked the controls, Mohr stood alongside, staring ahead at whatever was lying on the rail. It wasn’t unusual for such objects to turn out to be a bunch of rags or other debris. Far less common were real emergencies, although Mohr had experienced a few accidents in his 23 years with the railroad.

Now, as the train approached within 300 feet of the object on the rail, Mohr looked intently. Then shock coursed through him.

Tila Marshall dashed around to the rear of her house. She knew that Emily loved to play a game with her 11-year-old brother: The girl would run to the backyard while Zachary raced through the house to intercept her, causing squeals of delight. Marshall called out, “Emily! Emily, honey, are you back here?”

There was no sign of the little girl. Marshall ran to the front of the house, where Zachary was now standing. “Is your sister with you?” she asked Zachary.

“No,” he said, and ran into the house to look for her.

Lindley had an instant decision to make. Applying full emergency brakes with half the train still wrapped around a curve could cause derailment. But the terrible reality of the situation left Lindley no choice. He had to risk an emergency stop.

The train shuddered, and the wheels screeched in protest. Lindley lay on the horn and watched helplessly as the train continued to bear down on the toddler. He and Mohr felt successive jolts as the cars braked front-to-rear, each car crashing into the car ahead.

His unblinking eyes glued on the small figure before him, Lindley could do nothing now but pray.

Marshall was unable to focus, even as her legs turned to jelly and shook uncontrollably. Everything seemed unreal to her.

A wave of nausea overcame her. Yet she stood fixed in a hallway, unable to move. Zachary stood next to her crying, “Mom, I’m scared.”

As the train barrelled forwards, Robert Mohr acted on instinct. He yanked open the left door of the engine cab and stepped out on to a narrow walkway. He hurried to the front of the engine and crossed to the right side. He then stepped down to the lower portion of the walkway just to the rear of the train’s cowcatcher, or plough.

The child was now just 36 metres ahead. Mohr frantically considered what to do. At this speed—still about 32 kmph—a train this size would need another 135 metres to stop. There was no way they’d halt it in time. He winced as he imagined the plough hitting the little girl. With fewer than 10 seconds left, the baby rolled off the track and on to the outer tie. If she kept down, perhaps the right edge of the plough would pass harmlessly over her. But then she reared her backside up, preparing to stand. “No, no, baby, lie down!” Mohr yelled.

The train was down to 24 kmph now, as the horn loosed its deafening howl.

With just the toes of his left foot on the walkway and his left hand clinging to the railing, Mohr stretched out as far as possible. He knew he had only one shot.

The child, still trying to stand, was now directly in the path of the plough.

Stretching as far as he could, Mohr put his right leg out in front of him. “Come on, please,” he muttered through clenched teeth, “just give me another inch or two …”

Suddenly the little girl was upon him. Swinging his leg out, he swept her aside with his foot. He saw the baby hit some rocks headfirst, then spin around as the train lumbered by. Had she been knocked clear of the engine?

Mohr leapt from the moving train and ran back to the child. She lay crying by the tracks, blood streaming from a gash beneath her hair.

Marshall stood in the front yard of her home, clutching her son’s hand and staring ahead as people ran towards the tracks. She was trying to scream for help, but could only gasp unintelligibly.

Mohr knelt down beside the child. “Mama! Mama!” the little girl cried out. Ecstatic relief swept over Mohr.

It was only then that Mohr noticed the train had stopped and there were flashing red lights of emergency vehicles alongside the tracks. A neighbour, seeing the accident unfold, had dialled 911.

With the baby in his arms, Mohr began to walk and was met by police and a growing crowd of onlookers. Firefighters arrived, took the baby and handed her off to paramedics for a trip to the hospital.

Tila Marshall looked up to see police officers approaching her front lawn. Her mind spun in renewed terror. “Don’t you dare tell me that was my baby!” she screamed.

A police detective held up his hand. “Ma’am, ma’am, calm down. The baby’s going to be okay. We just have to find out whose it is.”

Marshall quickly realized that the child’s description fit Emily. The news that her baby was safely en route to the hospital finally sank in, and she collapsed, weeping, into the detective’s arms.

Mohr spoke with police and railroad officials, then began feeling shaky himself. Telling himself he still had a job to do, he began to walk the length of the train to check on the cars.

“You go sit in the cab,” a train official said. “I’ll do the inspection.”

As Mohr rested in the train, his pent-up emotions rushed to the surface. It had all unfolded so fast, and the reality of what he had done was only now hitting him. Within minutes, Lindley was standing beside Mohr, taking the controls again. They looked at each other, their expressions of relief and gratitude more eloquent than words. Mohr’s overalls were still spattered with blood. The train pulled slowly out of Lafayette.

That evening, when Robert Mohr got home, his family was standing on the front porch, applauding. They had listened to the news of his heroism on television. To Mohr’s relief they told him that the little girl had suffered nothing more serious than cuts and bruises. She’d be fine. 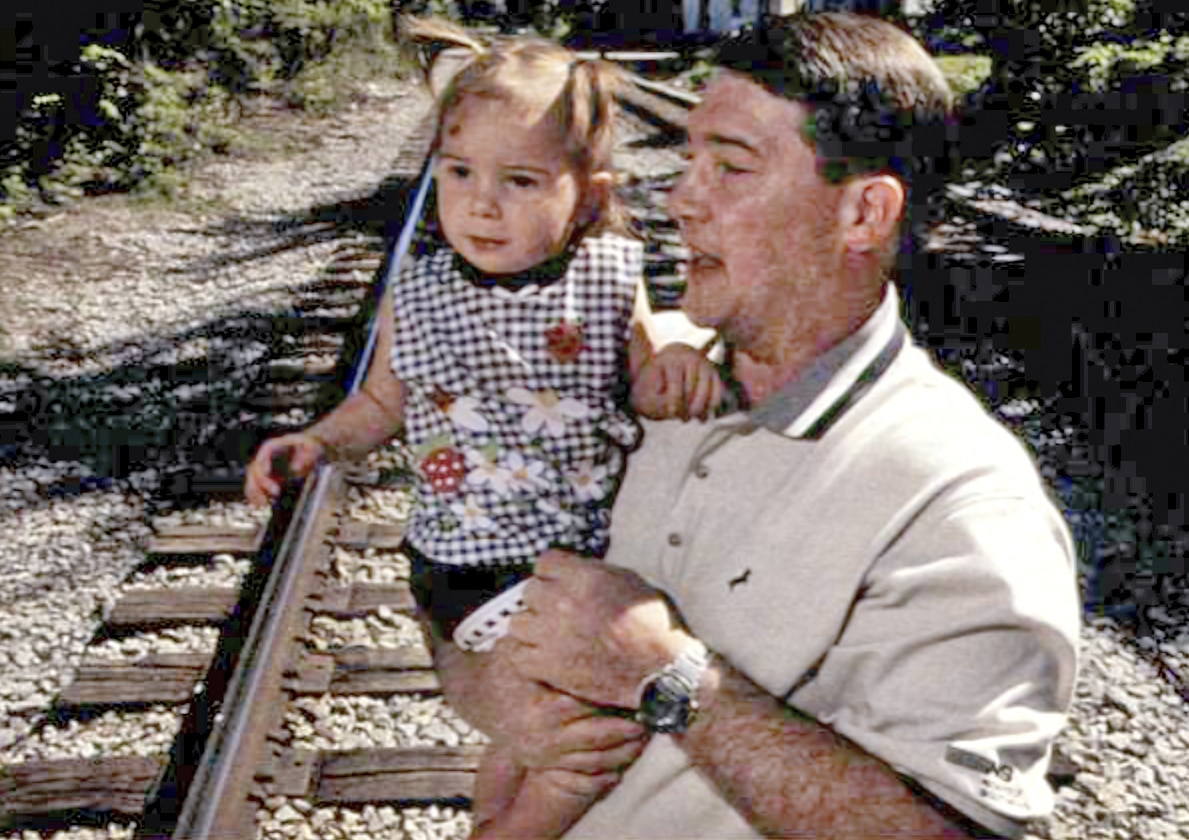 Emily Marshall suffered only cuts and bruises in her brush with the train, thanks to Robert Mohr's quick action. (Photo: © Steve Kagan/People Weekly)

A week later Mohr stepped from his car in front of Tila Marshall’s house. When Marshall was introduced to the man who had saved her daughter, she hugged him tightly.

Mohr picked up Emily and held her close. “Hello, Emily,” he said.

This story was first published in November 1998.

Do You Like This Story?
17
3
Other Stories
Please enter valid text
Must Reads
Latest Issue