Pockets Full Of Love: Funding For Charity with Confidence

A growing number of Indians are donating funds for social causes and medical emergencies, thanks to credible online crowdfunding platforms that have gained prominence Inspired by a successful Manila-based café run by people with autism-spectrum disorder, Mumbai’s Yash Charitable Trust (YCT)—an organization dedicated to adults with developmental and intellectual disabilities such as autism, Down’s Syndrome, cerebral palsy—wanted to start a similar enterprise in India. That was about two years ago.

While the YCT was running a small dabba lunch service managed by people with developmental and intellectual disabilities, opening a café was a big step. There were many hurdles on the way—limited professional resources, possible licence issues and the biggest of them all, the lack of funds. As Ashaita Mahajan, a YCT trustee, reveals, the entire team decided to take these challenges head-on. They held discussions with all the stakeholders on the way forward and finally came to the conclusion that there was one definite course of action for raising money—crowdfunding.

Within a few days of YCT talking about the plan to open a café as a way to provide ‘real employment’ for adults with developmental disabilities, donations started pouring in on ImpactGuru.com in August 2018. Hundreds of donors who had read about the efforts on the website and social media contributed small amounts of money. And, the trust was able to raise around ₹7 lakh on the crowdfunding platform. They managed to raise another ₹20 lakh from other sources. Café Arpan, run by 14 young team members, celebrated its first birthday this August.

Solicitation of funds, mostly in small amounts, from potential donors through web-based platforms or social networking sites for anything ranging from a business venture or a film, to the organization of an event, is not new. But with a few crowdfunding platforms that are almost entirely dedicated to raising donations for non-profit making projects like Café Arpan, medical emergencies and other social causes coming to the fore, more and more Indians, at home and around the world, are opening their hearts and loosening their purse strings for them. Prakash Rao at his school 'Asha O Ashwasana' in Cuttack

Take the case of D. Prakash Rao, a Cuttack-based tea seller, who runs a school for slum children: Rao’s school Asha O Ashwasana (Hope and Assurance) provides basic education for 170 children—from kindergarten to class 5. Rao runs the school from a small shed. While the dream to scale up has always been there, so has the problem of making ends meet with his meagre earnings from the teashop. “Although I have struggled a lot to educate the children, I never thought for a second that I would give up trying to make their lives better,” Rao says.

More teachers, better food and a bigger and better facility were his dreams for his school. After somebody told Rao that he could tap into online crowdfunding to garner funds to realize his dream, Rao was reluctant at first. Later he was convinced.

A video featuring his story on Milaap, one of the crowdfunding platforms, where he talks about his plan for his school, led to people contributing from all over the world, generating close to ₹50 lakh within weeks. Around 2,500 people from across the country and the world donated on Milaap for Rao. “My case proves that every Indian cares for genuine causes. It is just that they need to be sure that their money will be used for the purpose they have been raised for,” Rao says. Anoj Viswanathan, the founder of Milaap, says that a donation is “an explicit expression of empathy”, and without the ability to act on it immediately, social causes would probably not be able to garner enough support.That’s precisely what Rao is doing. He says that the plan to build the school is already underway and he hopes to teach several hundred students within a year. Most donations come from individuals in relatively small sums. These are the people who come to know about one cause or the other through social media. It may be a small contribution, but every drop counts. 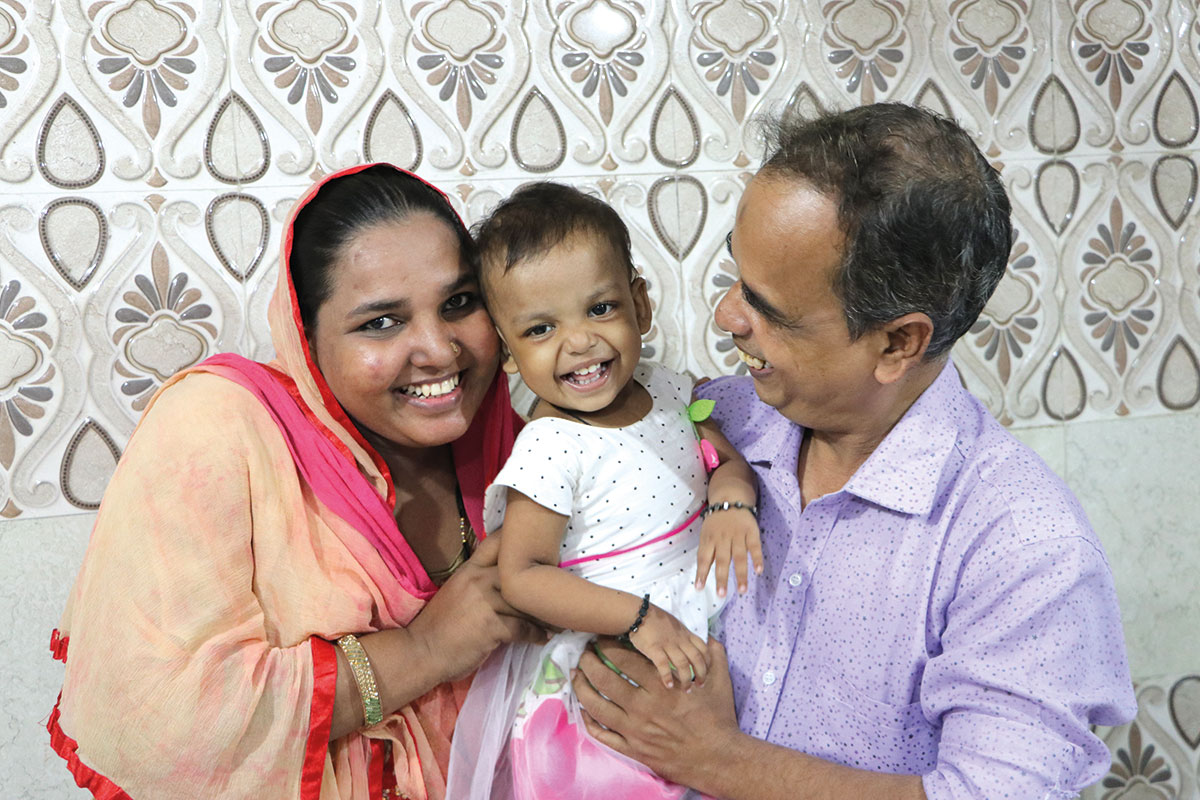 Baby Shifa with her parents

That’s how little Shifa was saved—just in time.

Around two years ago, a pall of gloom had descended over Shifa’s family in Mumbai. Shifa, who was just 30 days old then, was diagnosed with a congenital heart disease. Her father, Aftab Hashmi, a tailor, had no means to fund her surgery and had given up all hope. But a doctor asked him to approach one of the crowdfunding sites and try his luck.

A desperate Hashmi approached Ketto.com. His child’s picture, looking weak and wailing on a hospital bed, and the heart-rending story that went with it, drew generous contributions. Around ₹7 lakh was collected within a few days, which covered the operation and post-operative care. “This September we celebrated her birthday as it was this month that she got a new lease of life,” says a beaming Ameena, Shifa’s mother.

How the Public is Convinced 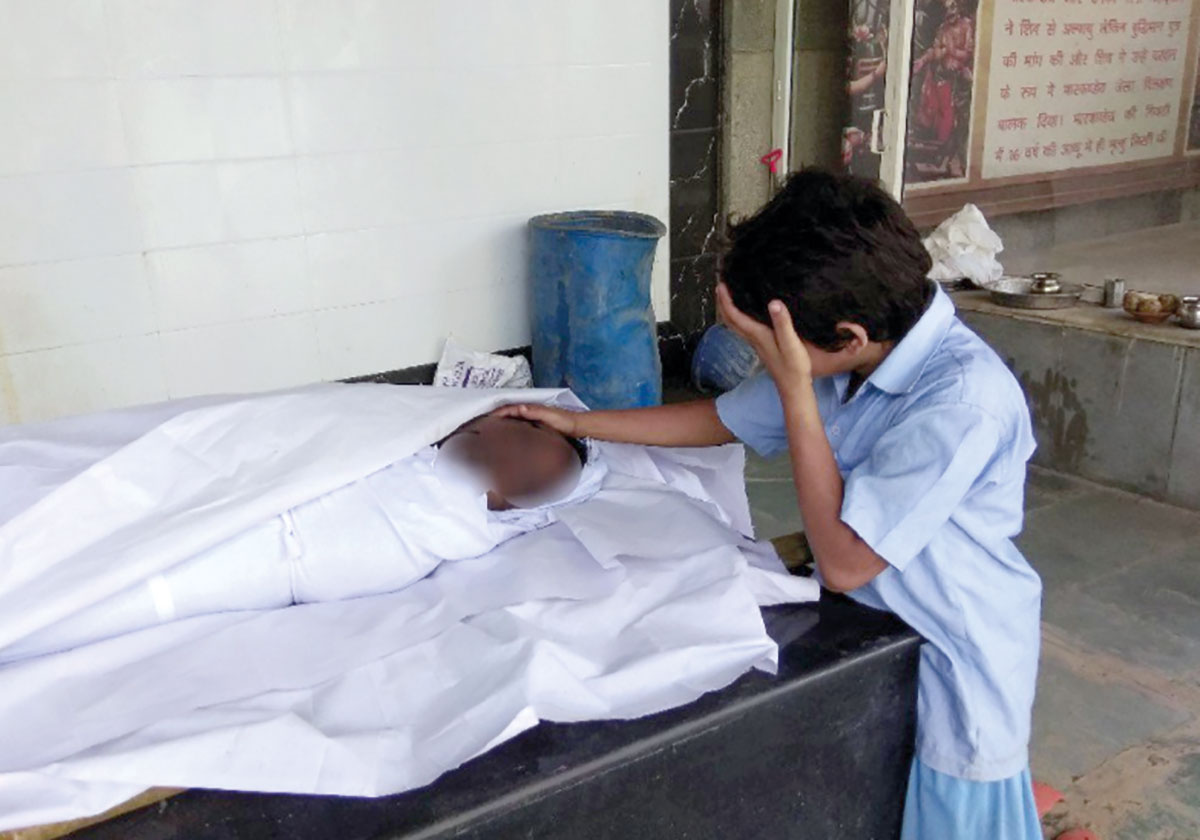 This image of a young boy crying by his father's dead body went viral and donations poured in.

It is the large number of people who are touched by the predicament of their fellow Indians that matters, even if their contributions are small. “Two hundred donors, contributing ₹5,000 each, can mobilize ₹10 lakh for cancer surgery in less than 24 hours,” says Piyush Jain, co-founder, and CEO, ImpactGuru.com.

‘‘Online crowdfunding has also enabled people to take charge of more local causes. For example, you can raise funds online to clean up a lake in your neighbourhood or fix the potholes, with help from your neighbours. Crowdfunding platforms make it easy for people looking to donate and be a part of social causes,” says Viswanathan.

Agrees Bengaluru-based lecturer, Abhishek Bhat, who donated for two medical emergencies on one of the crowdfunding sites. He doesn’t want to reveal the sum. “I contribute online with confidence because I know that my money will be utilized for the right cause. These platforms have brought the donor and those who are in need of funds a lot closer,” he says.

Unsurprisingly, more and more Indians are showing that they care for causes close to their hearts. ImpactGuru claims that, through its platform, over 20,000 patients have raised funds from over 300,000 donors.

Of course, some campaigns tend to do better than others. How people respond when a tragedy tugs at their heartstrings was evident in September last year after Anil, a daily wage labourer, died while cleaning a sewer in Delhi. The image of Anil’s son Gaurav weeping next to his body went viral on social media and within a day of the story being uploaded on Ketto, one of the most popular crowdfunding platforms in India, donations poured in ranging from ₹1,000 to a few lakhs. A total of ₹52,08,748 was deposited in the boy’s account after the mandatory deductions. Of the total amount,

₹50 lakh was converted into a fixed deposit for a period of 10 years. The family receives a monthly interest to take care of the children’s needs, health and education.

“The impact we witness and the work we do would not be possible without social media … It is the best channel to reach out to the crowds since we can easily set the target audience, and the message goes out loud and clear,” says Varun Sheth of Ketto.

According to Sheth, the co-founder of Ketto (an acronym for Key To Tomorrow), people raise money for causes ranging from women’s empowerment, healthcare, education, animal welfare, child development to sports and environment.

Some of the other crowdfunding sites driving social causes in India include Wishberry, FuelADream and BitGiving, among others. Almost all the platforms have strong checks and balances to ensure that only genuine cases are promoted on their sites and on social media. For instance, all of them conduct background checks of the people raising funds through them and, in cases of medical need, hospitals, where they are treated, are contacted and details sought; also the money is generally transferred to the hospital.

Building a Culture of Philanthropy 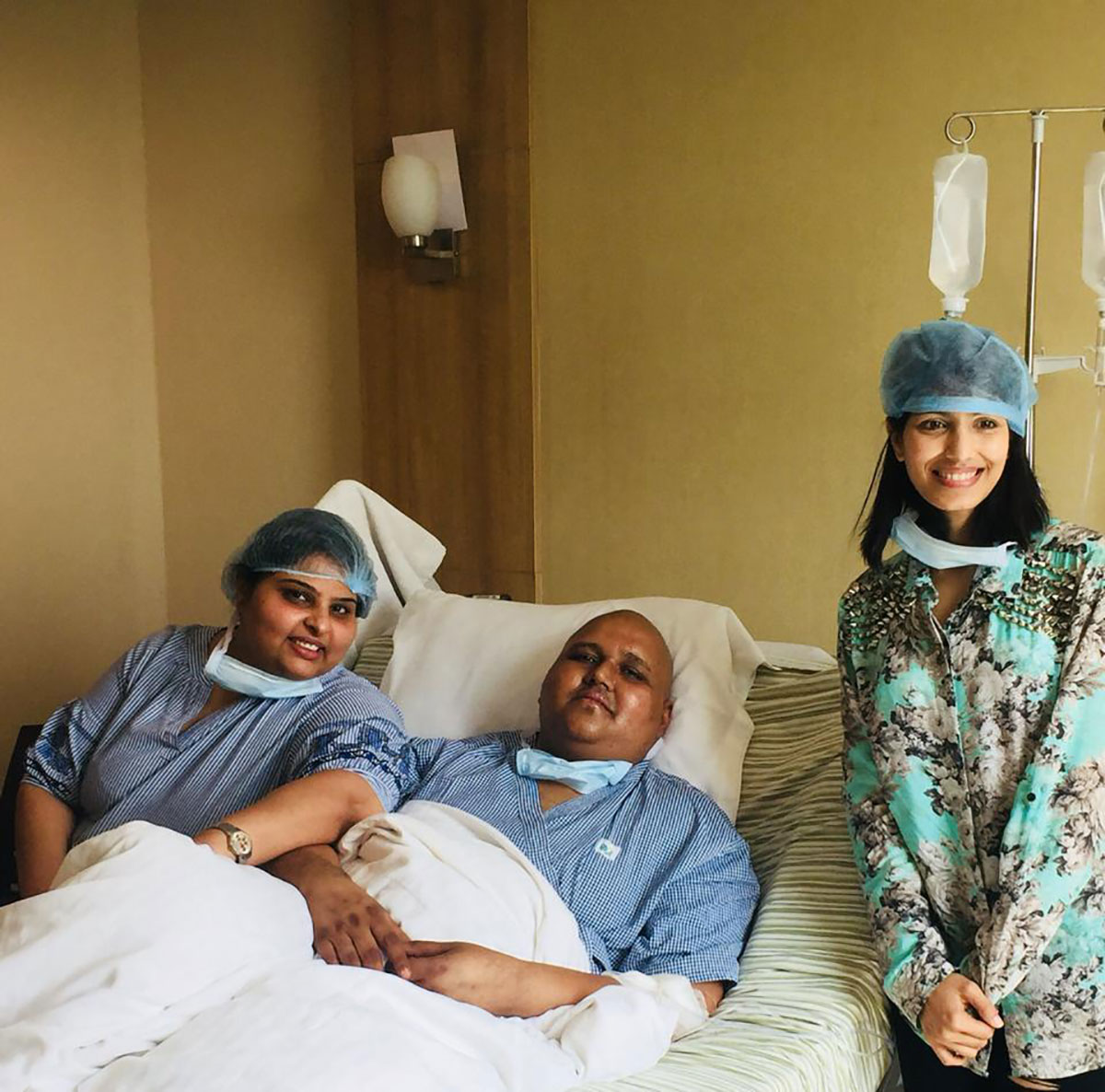 Khushboo Jain, co-founder and COO of ImpactGuru.com, with Amit Shenoy, a cancer patient

The work of these platforms has created a culture of philanthropy among Indians, and more and more people are coming forward to donate generously in the wake of disasters. “During the 2015 Chennai floods, we ran a fundraising campaign in partnership with Bhumi, an NGO, and received an overwhelming response with support pouring in from all over the world,” says Chaitanya Sharma, head of marketing and communications at LetzChange, among the very few NGOs in the crowdfunding arena. According to him, they raised more than ₹1 crore within a week, helping Bhumi accelerate its disaster-relief operations. Similarly, they helped Goonj, another NGO involved in relief, raise more than ₹1.75 crore in a matter of 15 days, when floods engulfed Kerala last year.

This again proves that people are more likely to donate when they know that their contribution will be utilized directly towards serving the cause they intend to support.

“All non-profits that are raising funds on LetzChange have to first go through a stringent due-diligence process. This includes validation of important legal documents such as the Registration Certificates, 80G and 12A certificates and a thorough check of the content provided, with an aim to highlight all relevant details about the organization to the users,” says Sharma.

Most crowdfunding platforms, while working like NGOs, do charge a fee—anywhere between five to seven per cent of the total funds raised—for meeting various expenses from the public.

These organizations generally keep donors updated, especially in case of medical emergencies, at regular intervals. “This is the only motivation for people, particularly when they part with their money to help a stranger,” says Viswanathan of Milaap.

“At the end of the day, it is the satisfaction of helping those in need is what matters most,” says Khushboo Jain, co-founder and COO of ImpactGuru.com. Jain recalls the sense of achievement she felt when she visited the family of Amit Shenoy, a Mumbai-based cancer patient, for whom the platform had raised ₹45 lakh last year. “When I met them in hospital, I realized that we are actually saving lives. I saw tears in the eyes of Amit and his wife Gopi and was moved by the power of what empathy can do,” Jain says.

It is this urge to make a difference, and the will to put their money where their hearts are that is powering the crowdfunding movement.