Miracle In Mid-Air: One Of The Most Legendary And Daring Rescue Missions In Aeronautical History

Almost 80 years after it unfolded in the sky over San Diego, a nearly impossible rescue mission remains one of the most daring feats in aeronautical history 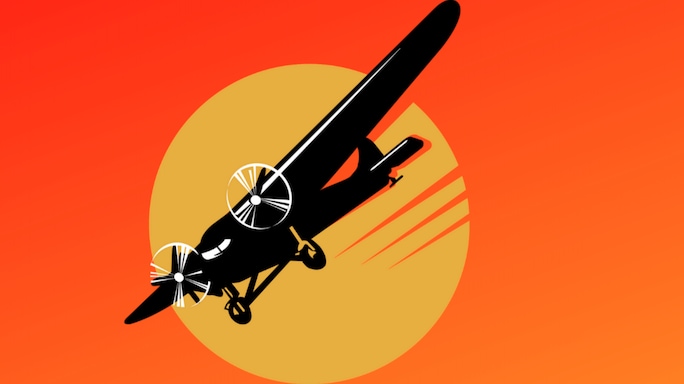 It began like any other May morning in California. The sky was blue, the sun hot. A slight breeze riffled the glistening waters of San Diego Bay. At the naval airbase on North Island, all was calm.

At 9:45 a.m., Walter Osipoff, a sandy-haired 23-year-old Marine second lieutenant from Akron, Ohio, boarded a DC-2 transport for a routine parachute jump. Lt Bill Lowrey, a 34-year-old Navy test pilot from New Orleans, was already putting his observation plane through its paces. And John McCants, a husky 41-year-old aviation chief machinist’s mate from Jordan, Montana, was checking out the aircraft that he was scheduled to fly later. Before the sun was high in the noonday sky, these three men would be linked for ever in one of history’s most spectacular midair rescues.

Osipoff was a seasoned parachutist, a former collegiate wrestling and gymnastics star. He had joined the National Guard and then the Marines in 1938. He had already made more than 20 jumps by 15 May 1941.

That morning, his DC-2 took off and headed for Kearney Mesa, where Osipoff would supervise practice jumps by 12 of his men. Three separate canvas cylinders, containing am munition and rifles, were also to be parachuted overboard as part of the exercise.

Nine of the men had already jumped when Osipoff, standing a few inches from the plane’s door, started to toss out the last cargo container. Somehow the automatic-release cord of his backpack parachute became looped over the cylinder, and his chute was suddenly ripped open. He tried to grab hold of the quickly billowing silk, but the next thing he knew he had been jerked from the plane—sucked out with such force that the impact of his body ripped a 2.5-foot gash in the DC-2’s aluminum fuselage. A Douglas DC-2 plane (Photo for representative purposes only. Photo via Wikimedia Commons)

Instead of flowing free, Osipoff ’s open parachute now wrapped itself around the plane’s tailwheel. The chute’s chest strap and one leg strap had broken; only the second leg strap was still holding—and it had slipped down to Osipoff’s ankle. One by one, 24 of the 28 lines between his precariously attached harness and the parachute snapped. He was now hanging some 12 feet below and 15 feet behind the tail of the plane. Four parachute shroud lines twisted around his left leg were all that kept him from being pitched to the earth.

Dangling there upside down, Osipoff had enough presence of mind to not try to release his emergency parachute. With the plane pulling him one-way and the emergency chute pulling him another, he realized that he would be torn in half. Conscious all the while, he knew that he was hanging by one leg, spinning and bouncing—and he was aware that his ribs hurt. He did not know then that two ribs and three vertebrae had been fractured.

Inside the plane, the DC-2 crew struggled to pull Osipoff to safety, but they could not reach him. The aircraft was starting to run low on fuel, but an emergency landing with Osipoff dragging behind would certainly smash him to death. And pilot Harold Johnson had no radio contact with the ground.

To attract attention below, Johnson eased the transport down to 300 feet and started circling North Island. A few people at the base noticed the plane coming by every few minutes, but they assumed that it was towing some sort of target.

Meanwhile, Bill Lowrey had landed his plane and was walking towards his office when he glanced upward. He and John McCants, who was working nearby, saw at the same time the figure dangling from the plane. As the DC-2 circled once again, Lowrey yelled to McCants, “There’s a man hanging on that line. Do you suppose we can get him?” McCants answered grimly, “We can try.”

Lowrey shouted to his mechanics to get his plane ready for take-off. It was an SOC-1, a two-seat, open-cockpit observation plane, less than 27 feet long. Recalled Lowrey afterwards, “I didn’t even know how much fuel it had.” Turning to McCants, he said, “Let’s go!”

Lowrey and McCants had never flown together before, but the two men seemed to take it for granted that they were going to attempt the impossible. “There was only one decision to be made,” Lowrey later said quietly, “and that was to go get him. How, we didn’t know. We had no time to plan.”

Nor was there time to get through to their commanding officer and request permission for the flight. Lowrey simply told the tower, “Give me a green light. I’m taking off.” At the last moment, a Marine ran out to the plane with a hunting knife—for cutting Osipoff loose—and dumped it in McCants’s lap.

As the SOC-1 roared aloft, all activity around San Diego seemed to stop. Civilians crowded rooftops, children stopped playing at recess, and the men of North Island strained their eyes upward. With murmured prayers and pounding hearts, the watchers agonized through every move in the impossible mission.

Within minutes, Lowrey and McCants were under the transport, flying at 300 feet. They made five approaches, but the air proved too bumpy to try for a rescue. Since radio communication between the two planes was impossible, Lowrey hand-signalled Johnson to head out over the Pacific,where the air would be smoother, and they climbed to 3,000 feet. Johnson held his plane on a straight course and reduced speed to that of the smaller plane—160 kilometres an hour. 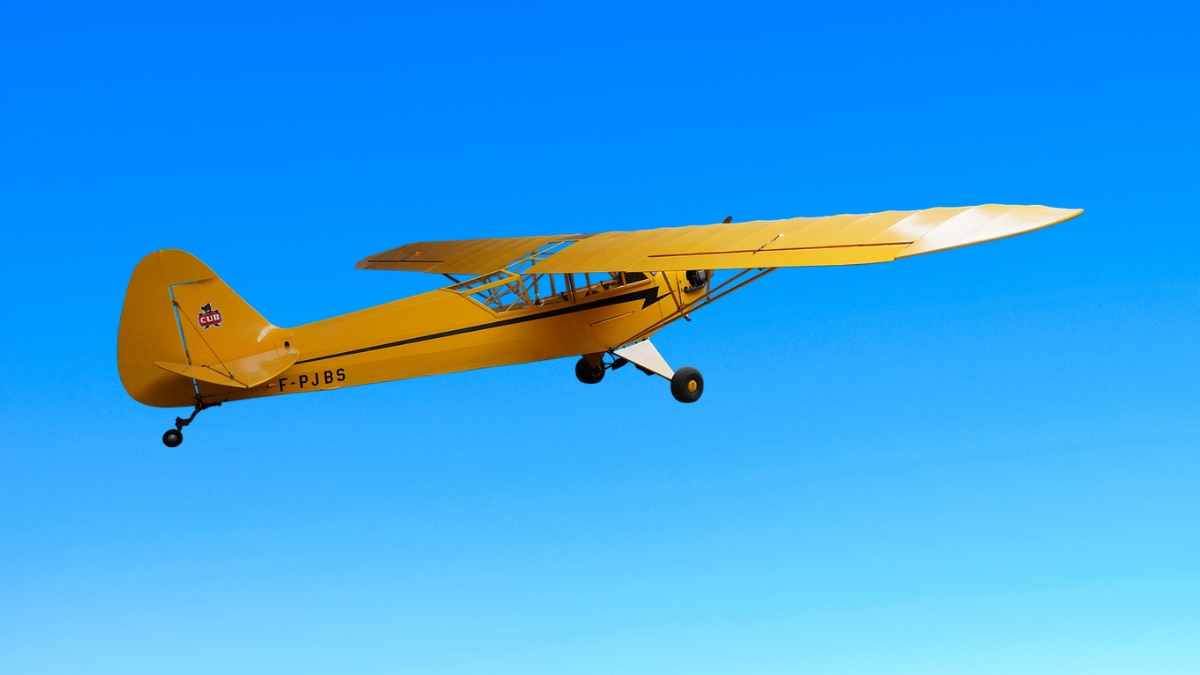 Without delaying at all, Lowrey and McCants set out to pull off one of the most daring aeronautical rescues. (Illustration used for representative purposes only. Courtesy Pixabay)

Lowrey flew back and away from Osipoff, but level with him. McCants, who was in the open seat in back of Lowrey, saw that Osipoff was hanging by one foot and that blood was dripping from his helmet. Lowrey edged the plane closer with such precision that his manoeuvre jibed with the swings of Osipoff’s inert body. His timing had to be exact so that Osipoff did not smash into the SOC-1’s propeller.

Finally, Lowrey slipped his upper left wing under Osipoff’s shroud lines, and McCants, standing upright in the rear cockpit—with the plane still going 160 kilometres an hour 3,000 feet above the sea—lunged for Osipoff. He grabbed him at the waist, and Osipoff flung his arms around McCants’s shoulders in a death grip.

McCants pulled Osipoff into the plane, but since it was only a two-seater, the next problem was where to put him. As Lowrey eased the SOC-1 forward to get some slack in the chute lines, McCants managed to stretch Osipoff ’s body across the top of the fuselage, with Osipoff’s head in his lap.

Because McCants was using both hands to hold Osipoff in a vice, there was no way for him to cut the cords that still attached Osipoff to the DC-2. Lowrey then nosed his plane inch by inch closer to the transport and, with incredible precision, used his propeller to cut the shroud lines. After hanging for 33 minutes between life and death, Osipoff was finally free.

Lowrey had flown so close to the transport that he’d nicked a 12-inch gash in its tail. But now the parachute, abruptly detached along with the shroud lines, drifted downward and wrapped itself around Lowrey’s rudder. That meant that Lowrey had to fly the SOC-1 without being able to control it properly and with most of Osipoff ’s body still on the outside. Yet, five minutes later, Lowrey somehow managed to touch down at North Island, and the little plane rolled to a stop. Osipoff finally lost consciousness—but not before he heard sailors applauding the landing.

Later on, after lunch, Lowrey and McCants went back to their usual duties. Three weeks later, both men were flown to Washington, DC, where Secretary of the Navy Frank Knox awarded them the Distinguished Flying Cross for executing “one of the most brilliant and daring rescues in naval history.”

Osipoff spent the next six months in the hospital. The following January, completely recovered and newly promoted to first lieutenant, he went back to parachute jumping. The morning he was to make his first jump after the accident, he was cool and laconic, as usual. His friends, though, were nervous. One after another, they went up to reassure him. Each volunteered to jump first so he could follow.

Osipoff grinned and shook his head. “The hell with that!” he said as he fastened his parachute. “I know damn well I’m going to make it.” And he did.

This article first appeared in the May 1975 edition of Reader’s Digest.