Midnight's Fury: Memories Of A Horrifying Journey To India During Partition

Harbans Mahajan looks back at the hellish journey he and his family took to India in 1947, when he was six years old It is a still night in September 1947. I am six, lying quietly in the embrace of Pitaji, my father, under the blanket of a starry sky. In our home—the peaceful, quaint village of Dhallewali, Sialkot, near the Chenab River in Punjab—life was good. Our family was prosperous, food was plentiful, and people from different walks of life and faiths lived in harmony here. That night, a solitary owl, perched on the mulberry tree in our compound, hooted ominously. It was so eerie that a strange fear gripped me. I held Pitaji tighter and fell asleep.

Partition was upon us—Dhallewali was to be a part of Pakistan. Shukra, a Muslim camel herder, who was a family friend, came to Bhaayiaji, my grandfa­ther, and whispered stories about the communal tension in the surrounding areas and the possibility of non-Mus­lims having to migrate to the new India. He offered his services, along with his fleet of 17 camels, to shift our family to Jammu, close to the Indian border. But Bhaayiaji, thinking ill of Shukra’s generosity, refused his offer.

News travelled by word of mouth then. There were chilling rumours of mounting violence between the com­munities. Since our village remained calm for weeks after Partition, we paid no heed to them.

The first incident occurred in early September when the principal of the local school, a Hindu, was killed in broad daylight and his body thrown from the top of his two-storey pukka house. The thud, as his dead body hit the ground, reverberated throughout the village. Fear and panic spread like wildfire—the madness of Partition had begun.

That still September night, a day after this incident, was my last in Dhallewali. The next day started out normally: My brother Dev Prakash, 14, and I were in the playground, in our undershirts and knickers. We suddenly saw Pitaji sprinting towards us, panic-stricken.

We had to move fast; there was no time to even change. Any questions we had he promised to answer later, but first we had to flee. While we did not quite grasp our predicament, Pitaji’s tone scared us into silence. And so we ran, as fast as our little legs could take us, to the Tawi River, about three kilometres from Dhallewali. There was no time to look back, even as my beloved village faded away from view.

Reaching the riverbank, we hired a boat to go across the river to the border. From there, we took a bus to Jammu and reached my aunt’s place that night. We had left behind our mother, sisters and grandparents. Pitaji had taken us first because we could be saved without any questions being raised, which may not have happened had we travelled in a larger group. The next morning he at­tempted to return to Dhallewali to fetch the rest of the family, but was forced to turn back. In just a day, the situation had gone out of hand. There were riots on the streets and our stores had been looted—a mass exodus of Hindus had started. The rioters, mostly from the fringe, had put a price of ₹500 on my father’s head: Our house was raided; the rioters did not leave anything behind. Throughout this ordeal, my family had to take refuge in Shukra’s house, whom they had once mistrusted. Overnight we had gone from being wealthy mer­chants to paupers. 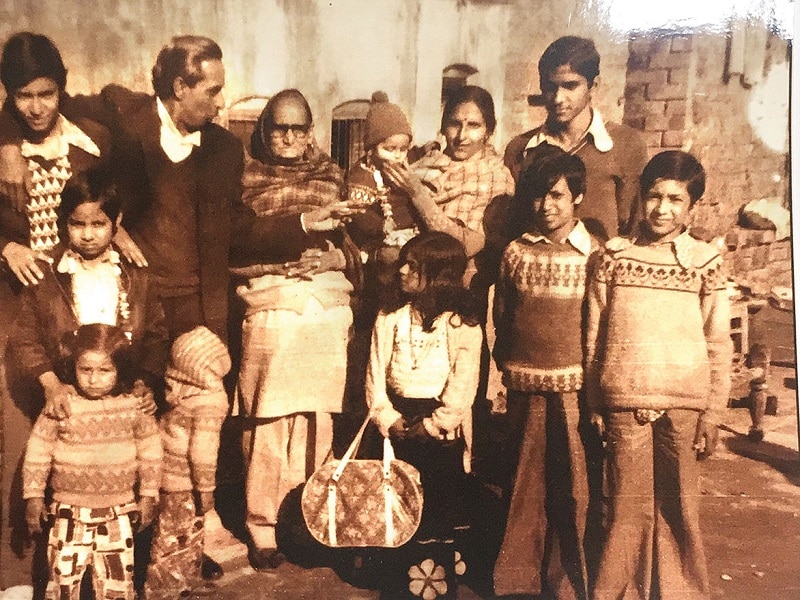 The Mahajan clan after relocating to Jammu, in 1976

My family in Pakistan was stranded and in hiding. They waited for Pitaji’s return, but he could not go back. So, through a messenger, he directed the rest of the family to join a kafila (a group travelling together on foot). This way they would not be isolated in their journey to the border. Bhaayiaji stayed back with a sick Bebeji, my grand­mother, at Shukra’s house—my mother and sisters now separated from them. Their arduous trek to India had begun.

The route we had taken was no longer safe. My mother and sisters walked through fields and jungles, taking a much longer way. Our youngest sister was just one and had to be carried throughout. The kafila travelled at night and hid in the sugarcane fields en route to Ranbir Singh Pora in Jammu during the day. It took them over a week to reach the border.

We had lost everything, the family had been separated and forced to march like criminals under the cover of darkness. The only question was: Would we make it? My mother and sisters joined us in Jammu after a week, malnourished and with blisters all over their bleeding feet.

In a few days, we were all on the road again. This time we were headed to Alamgir, a sleepy village near Ludhiana, where Pitaji had a friend who was going to help us get back on our feet. There was no direct train from Jammu to Punjab in those days. We had wanted to take the bus, but roads were closed due to heavy rainfall. We couldn’t afford to keep waiting, with our reserves dwindling. To cross the flooded rivers between Jammu and Punjab, there was only one alternative.

We were off crossing the treacherous Basantar River on camelback. No one in my family, except my father, could swim. It was simply terrifying. The current was strong, but the camel trudged on. The water level swelled mid-course, and the ground appeared to sink and shift under the weight of the camel. Neck-deep in the river, panic struck me as water splashed my face. I closed my eyes and mouth, bracing up for the worst. Holding on somehow, I cried for it to be over. Finally, we reached the riverbank without any mishap.

We then walked long distances to get to a train station in Punjab. The name of the station eludes me, but the memories from that day are vivid. The first train that arrived was going towards Delhi via Amritsar. The compartments overflowing with people, there was no space to even breathe. But there was no time to wait for the next one. We had to sit on the roof of the train. The roof was made of slippery metal and passengers had nothing to hold on to. It had stopped raining by then and the sun was beating down on us.

Finally, after what seemed like hours of waiting, the train began to move. It moved slowly at first, lurching forward, then picked up speed. A small child, younger than me, was next to us. As the train continued to accelerate, he slowly started to slip. I watched, para­lyzed with horror, as his body flew off the train at the bend; his small hands unable to hold on to the slippery steel of the train roof that had turned blister­ing hot from the scorching sun. I still remember his screams as he was flung away, forever lost to his family.

I looked around fran­tically. Was he okay? Did anyone notice? Would the train stop to see if he was still alive? The boy’s frantic screams had fallen on deaf ears. Noth­ing could be done. This scene repeated itself sev­eral times—with shrieks of families being torn apart as young and old were thrown off the train that stopped for none.

Finally, when our train halted at Amritsar everyone heaved a sigh of relief. Plain chapati and dal, handed out to us, seemed like a royal feast. As we ate, yet another horror unfolded before us. A train from the opposite direction, just as crowded as ours, carrying Muslim families was headed towards Pakistan. The people on it looked no different from us: as tense and tired; this was probably the last stop before their train entered Pakistan.

Out of nowhere, a mob armed with swords and daggers surrounded the train. All we could do was watch help­lessly as the passengers were butchered before our eyes. Their age and gender did not seem to matter to the assailants. The quiet station echoed with their screams and the ground turned a horrid shade of muddy red.

I would later learn that this was revenge for a similar incident in Pakistan: the only difference was, Hindus and Sikhs fleeing to India were massacred. One massacre is as chilling as the next—all that is left are pools of blood and piles of bodies. My parents shielded my eyes from the carnage but they needn’t have; my own tears blurred my vision anyway. We reached Alamgir at long last. There, we were given a vacant house to live in, at no cost. Pitaji didn’t have enough capital to restart his business, so he turned to teaching at the village school. Life was never the same again, but we were thankful to be alive.

My father’s job took us to Ferozepur next, where we were reunited with our grandfather. He had stayed back with my sick grandmother in Shukra’s house in Pakistan for six months until she breathed her last. Shukra looked after them as he would his own parents, pro­tecting them from rioters on multiple occasions, at great risk to his life.

When Bebeji died, Bhaayiaji had nothing left in Pakistan anymore. Him finding us in India, at a time with next to no connectivity, was miraculous. It was only possible due to the help of Good Samaritans and angels like Shukra whom he encountered along the way.

Although we could have died, several times, during our hellish journey, we made it somehow. At age six, Partition nearly broke me, but it taught me to keep moving forward in life.

The author retired from a central PSU, and now lives with his family in Pune.

Do You Like This Story?
25
0
Other Stories
Please enter valid text
Must Reads
Latest Issue