Man on the Plane

His silence taught me a crucial lesson. 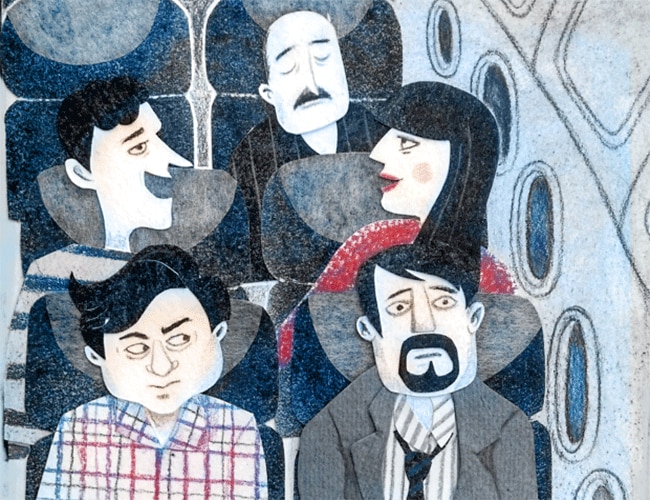 He must have had that nice window seat all the way from London. An Indian, he looked under 40, medium height, slim and wore a blazer. When I boarded the Emirates flight in Dubai--it was October 2003-I got an aisle seat next to him. I looked at him and tried to smile as I sat down. But there was a blank, distant look that made me stop mid-smile. One of those, I thought.

Each time I take a flight, I try to chat with a fellow passenger. Most people are responsive when they're alone at 40,000 feet. Only when it's one of those few, who barely even nod, do I keep to myself. So flying has helped me get to know perfect strangers. To a journalist, this could be the seed of an unexpected story or simply a chance to hear something different. In any case, with good company up there, time flies too. In recent times I've flown seated next to, among others, a young agricultural banker and a financial consultant. I've had conversations with a German medical engineer who holds patents on heart transplants, an event manager from Paris, a Mumbai grandmother on vacation. In November, I even flew with a couple of Iranian soldiers returning from Europe. You never know who you'll meet next, and they're usually interesting once you've broken the ice.

But the man wearing the blazer on my left, on that three-hour-long Dubai-Mumbai flight, was a puzzle. I glanced his way a couple of times but he just looked through me. One of those snooty non-resident Indians, I reckoned. What do you lose if you just smiled at a fellow human being? Most of the time, he stared fixedly at the seat in front of him.

Why are some people so full of themselves?

When the stewardess brought lunch, the unfriendly man had his eyes shut. She gave me a should-I-wake-him-up look. I didn't say anything, and he didn't get his lunch. Serves him right.

He soon woke up and saw me eat. But he didn't ask for his meal. He could just have pressed a button. That's his problem.

We still have almost two hours of flying left. I read a magazine, I try to play a video game, I listen to music. He does nothing.

At times our eyes meet, but he isn't all there. He's like no other passenger I've ever sat next to. By the time our jet lands in Mumbai, I find his presence almost uncomfortable. As we taxi down the runway, the intercom doles out the usual closing messages. It ends with a request to keep all mobile phones switched off a little longer.

That's when I hear the man speak for the first time--on his mobile phone. The cheek!

He seems to be discussing his connecting flight. About somebody receiving him … it all sounds like some special arrangements. I have half a mind to tell him to shut up and switch it off. Just before the aircraft comes to a halt, he's the first to stand up. "Excuse me," he says to me. "May I leave? I can't miss my connecting flight."

Hmm …! I get up to make way for him when he goes on mechanically, "My wife and child died in a road accident in Delhi."

As I see the man rushing out before the other passengers could block the aisle, I'm shell-shocked by the revelation. Suddenly, everything falls in place. The tables have turned. I'm the bad guy for having judged him so hastily--and so wrongly. I could have spoken first!

Despite his terrible loss and the torment he has been enduring, he was calm, controlled and dignified throughout. And, maybe, in the midst of his soul-crushing sorrow, he didn't want to burden a stranger with his pain.

That was a brave man, a fellow traveller from whom I learnt an invaluable lesson: To look beyond the façade and to never assume anything until you have walked in the other man's shoes.

This story first appeared in May 2008.