Love Stories: My Leap Of Faith

From obdurate parents to scrutinizing authorities, this couple faced down the powers-that-be to fight for their right to love freely, and help others like them do the same. 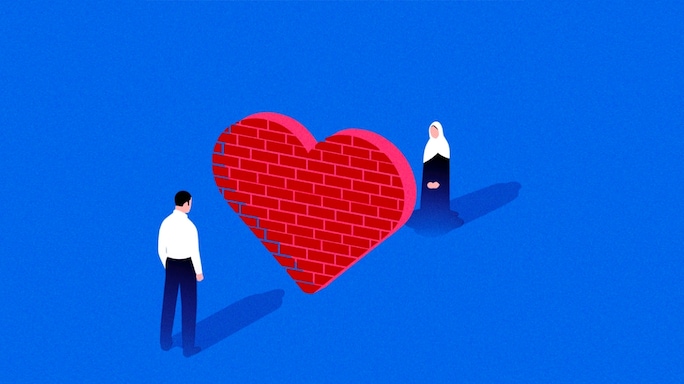 I sat on the first bench in class, and Mohan on the second, right behind me. We were both students of zoology at Delhi University and were drawn to each other instantly. We noticed each other in class, fully aware of the other’s attention. While exchanging notes and discussing lectures, a friendship grew and soon we began speaking on the phone. One day, out of the blue, Mohan ‘proposed’ to me via a text message, asking if I wanted to be in a relationship with him. I thought about it for a whole day, and eventually said yes.

The year was 2011. It never mattered to us that we belonged to different religions—Mohan, a Hindu man, and I, a Muslim woman—or what anybody thought or said. Our emotional bond was so strong, so quickly. Those three years of graduation, we spent every day together, including our long commute back home. We studied together in the library, each preparing a topic and tutoring the other so it was more fun learning that way. Later, we enrolled in the same Master’s programme and continued studying together. Even when we couldn’t see each other every day, I managed to make up reasons to meet at least once every week.

In late 2018, Mohan decided to talk to his parents about our relationship, as did I. Both families refused to accept our being together and declined to engage in any further discussion. “Focus on your studies now,” my father said, and I did. My father’s thinking was always different. Even as my family objected to my going to college, my father went against everyone and gave me the education I wanted. He rejected certain stereotypes. “Why should she stitch, cook and wash dishes at home just because she’s a girl? That’s not necessary,” he would say. This influenced how I reasoned and thought about things. It also helped that I got to step out of my home in north-east Delhi, met enlightened, reasonable people and had a partner who supported my decisions. We knew we wanted to be together, so we let the idea simmer at home.

But during lockdown in 2020, things took a darker turn. My family made their position clear: I couldn’t marry outside our faith. They began to actively look for prospective grooms from our community. I tried to reason with them and tensions rose. In different ways—at times through a raging all-night fit, or by being extra nice at others—my mother urged me to change my mind. She even admitted to snooping on my text messages. At one point I realized, things would never work for us this way. And I could not imagine marrying a stranger. There was nothing left at home anyway—trust is the basis of every relationship, and between my mother and I, that was gone. So, I left home.

Through the help of Dhanak of Humanity, a Delhi-based non-profit that supports interfaith couples like us, I received temporary protection in a shelter home before moving into a rented flat with Mohan. We wanted to have a secular marriage under the Special Marriage Act which meant that we would have to meet its harsh requirements—a 30-day notice period after application during which our private lives would be displayed outside the office of the district marriage registrar for public scrutiny, open to critique and objections on specific grounds. During this notice period, we filed a petition at the Delhi High Court challenging this provision as it was “a breach of privacy” that “jeopardizes (the couples’) life and liberty”, we said. My point of view, simply, was that this will help other couples in the future. Most women are either unable to speak for themselves or have been conditioned to accept their fates and circumstances as the norm. I had the rare opportunity to take a stand, so I did. I didn’t want to lose the opportunity. We are still awaiting the hearings.

On the afternoon of 28 October, with five close friends as witnesses, Mohan and I officially married. The previous day, Dhanak organized a small gathering for us, along with a few other couples they have supported, and after the marriage was solemnized, we went to the mall for lunch. No pomp or glamour, but filled with love, friendship and genuine support. It was just the kind of simple, intimate wedding I always wanted.

Mohan is a pharmacist and I continue to study while preparing for the civil services exam. We enjoy doing everything together now. Mohan comes home every day and asks me what I am studying and we talk, discussing everything under the sun. Around Christmas, my father visited us for the first time since I left, bringing with him the belongings and study material I had to leave behind. We cooked lunch for him together. Mohan was so nervous that he made a bit of a mess. But we had a lovely time, discussing politics and even finding a moment to have a heart-to-heart conversation. My in-laws, on the other hand, have accepted me but not my religion. That’s another battle I will fight in my own time. There’s no rush. We’re as happy as can be living together for now, just the two of us.

Do You Like This Story?
15
4
Other Stories
Please enter valid text
Must Reads
Latest Issue