Lending a Hand in Ukraine

Amid the brutality and destruction,people around the world have reached out to help those caught in the crossfire.Here are a few of their stories Alex Spektor was nervous. He was in Poland near the Ukrainian border about to meet his twin sons, Lenny and Moishe, for the first time. The boys were just 10 days old, born pre-maturely to a surrogate mother in Kyiv. The day before, on 24 February,Russia had invaded Ukraine. With the country under siege and his under-sized babies in the neonatal intensive care unit (NICU) requiring oxygen and constant monitoring, Spektor had no clue how he would get them home to Chicago safely.

Though 14,000 people were already seeking Stern’s services, when Spektorreached out to him Stern recognized just how dire the situation was for Lenny and Moishe.

“If dust gets in the NICU, they’re in trouble. If the power goes out, they're in trouble. If there’s a bunch of shot-up troops and the doctors get spread thin, then they’re in trouble. So, the bottom line is getting out of Kyiv,”Stern told NPR.But extracting the twins would require more than a fast car. The precious cargo had to be monitored and watched continuously by medical staff. To keep tabs on them during the 13-hour trip to the Polish border,Stern arranged for two ambulances,two doctors, two neonatal specialists,a nurse and a Ukrainian ambulance crew. Stern would follow in his car to navigate the various checkpoints and live fire.

Then there was an added wrinkle:Baby Sophie, another preemie who needed to be rescued. Born two days after the boys, she was even more fragile than the twins. This was quickly becoming the toughest rescue Project Dynamo had faced. Project Dynamo’s Bryan Stern (above, in black coat) with Ukrainian EMTs and Alex Spektor (in scrubs) after rescuing Spektor’s newborn twins; and at left with some of the many others he helped save. COURTESY PROJECT DYNAMO

Up to that point, the Project Dynamo team had conducted roughly30 rescue operations in Ukraine. One of the more daring missions involved evacuating Army Sgt Robert Platt,a former American paratrooper who lived northeast of Kyiv with his wife. The Platts found themselves surrounded by Russian tanks as soldiers went house to house, looting.Stern aborted his first rescue attempt when the Ukrainian checkpoint he was driving through came under Russian artillery fire.

Stern and his colleagues eventually got the Platts out of Ukraine using safe houses and car-to-car transfers.“What we do is go from the hot zone to the warm zone to the cold zone to safety,” Stern said. Typically, once they cross the border, a team is waiting to take the evacuees to another safe location until they figure out how to get home to the United States.

Saving Lenny, Moishe, and Sophie was proving even more problematic.The convoy found themselves under fire as soon as they left for the border.“The Russians were shelling something else, but it was close enough that the ground was shaking,” Stern told NPR. “I mean, the artillery doesn’t care what it is—it’s gonna land where it lands. The artillery doesn’t say, ‘Oh,well, there’s babies here, so we’ll go somewhere else.’

”At the Polish border, Spektor waited with his phone, anxious for updates.Around 11 p.m.—more than 13 hours after they left the hospital in Kyiv—Stern texted Spektor: “We’re at the border.” A few hours later, Lenny and Moishe were in their father’s arms.Soon, all three babies were resting in a Polish hospital.

“The war didn’t want to let them go,” Stern says. “But we got them out.”The danger of the mission was not lost on Stern. The man who served multiple combat tours and was awarded a Purple Heart told Today it was “by far one of the most stressful things I’ve ever done in my life.”

A YouTube video has captured the hearts of people around the world. It shows two young Ukrainian refugees walking through the doors of their new school in Naples, Italy. They are brother and sister—Dmitri, 10, and Victoria, eight. As they nervously enter, they are greeted by more than 200 cheering classmates and teachers waving Ukrainian flags and holding welcome signs. Then, two of their new classmates take them by the hand and lead them to their classrooms. As the video ends, we know the pair are in good hands. Images of abandoned strollers left in the mud by fleeing refugees are a stark reminder of how dire the situation is for Ukrainian mothers and their children. Recognizing need, Polish mothers have left strollers on train platforms and at border crossings, easing at least one burden for families displaced by war. 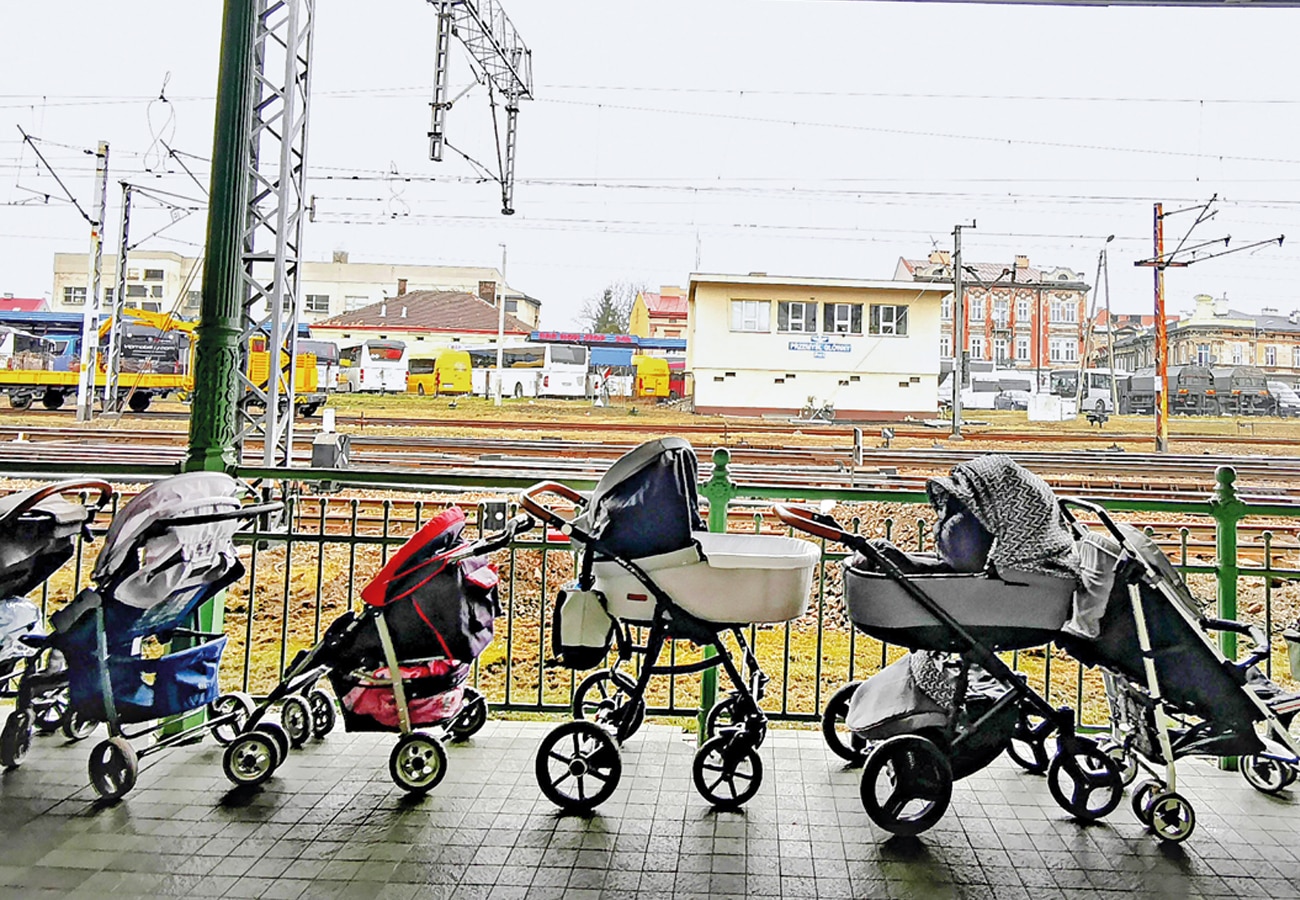 Fanya Bass was a teenager in1942 when she fled her Ukrainianhometown, Rafalowka, before theNazis took over. Her parents and five siblings weren’t so lucky. Like many other Jews, they perished in slave labour camps.

For a year, Bass hid out in a forest until Maria Blishchik stumbled upon her and took her to the home she shared with her husband and children. Had the Nazis found out,the Blishchiks likely would have been killed. Bass stayed with them until 1944, when the Germans were pushed out. Both women have since passed away, but the heroic act created a lifelong bond between their families. So when Bass’s granddaughter Sharon Basslearned that the Blishchiks’ granddaughters, Lasia Orshoko and Alona Chugai, had fled Ukraine,she was eager to repay the family debt and bring them to Israel.

First, she got politicians to cut through red tape. Then she paid part of the women’s airfare to Tel Aviv. Sharon invited them to stay in her home as long as they wanted. After all, she told the Washington Post, “Maria didn’t put a time limit on how long she sheltered Fanya."

Among the refugees that crossed the Polish border was an unlikely group:six lions, four tigers, two caracals (African wild cats), an endangered African wild dog and a capuchin monkey,all sharing space in a cramped truck.One lion’s crate was held shut by cages placed against it. With war encroaching, the menagerie had been plucked from a preserve for abused wild animals by the Dutch animal rescue organization AAP—Dutch for ape. After skirting roadblocks and live fire, the truck entered Poland, and the animals were sent to rescue centres in Spain and Belgium. Soon after, the wild dog was spotted playing and chasing his own tail. It was a welcome sight, says AAP's director, David van Gennep.“After everything they have been through, our first goal is to see them develop into healthy, normal animals.” By Malika Boudiba from France 3 TV

Soon after Russian tanks rumbled into Ukraine, Lucas Wojcik, a French businessman, knew that casualties were likely to be heavy. He also knew that,as the owner of Euro Machines, which sells new and used emergency vehicles, he was in a position to help. On 7 March, he arranged for a truck hauler filled with ambulances to leave the small town of Commercy and head for the front lines.It started five days earlier, when Wojcik posted an appeal on Facebook. “I work in the ambulance business,” he wrote, “and following the start of war in Ukraine, I decided to personally mobilize three medical vehicles. Several dozen people have volunteered to drive the ambulances to Ukraine, so there will be other convoys depending on the support.”There was a lot of support, much of it in the form of donations. The number of ambulances Wojcik promised grew from three to 22, each equipped with much-needed first-aid supplies.Soon, the Facebook page filled with offers from volunteers to deliver the vehicles to the war zone. Putting the ambulance convoy together cost more than $30,000 (`23,52,345), much of it covered by Wojcik. But he shrugs off the price tag. “If you don’t give from your pocket, you can’t initiate much.” A TOWN THAT CARES

As of mid-April, Romania had taken in more than 750,000 Ukrainians fleeing the war. Among the busiest points of entry is the town of Siret, where the roughly 10,000 residents welcome refugees with tables offering everyday necessities, such as diapers, hygiene products, and toys. Signs read “Help yourself, it’s free.”A Romanian youth group, whose name roughly translates to ‘Association for Tomorrow’s Generation’, has braved freezing conditions to serve hot drinks and meals around the clock. Meanwhile, locals volunteer their services as translators and drivers, transporting the weary and frightened to hotels, welcome centres, or other cities in Romania.“When the Ukrainians arrive,they are exhausted and scared,”Corneliu Dediu, regional head of the Red Cross, told infomigrants.net.“It’s hard for them to have to leave everything. It’s also hard for us to see them in this state.”