An Indian escapes an arsonist mob in Nigeria – quite by miracle. 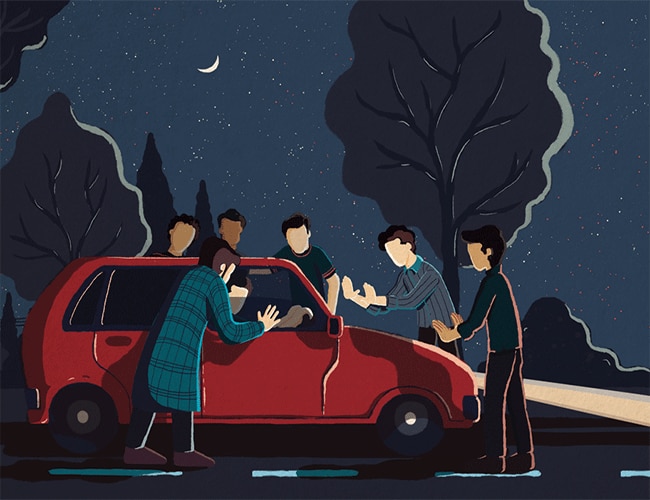 After a horrifying incident of armed robbery on campus in the Nigerian town where we lived, my wife Meera decided to return to India with our son. The year was 1986 -- robbers attacked as many as seven houses, taking away most of their valuables. Although no one was hurt, shots were fired to spread panic. We wanted to leave immediately but I had to stay back to complete my assignment with the university.

We had been in Nigeria since 1980, and I worked as the principal administrative consultant at the Institute of Administration, Ahmadu Bello University. In 1987, a few months before I left the country to join the National Law School back home in Bangalore, a religious strife broke out -- angry Nigerian mobs reacted violently to the attacks on their Muslim brethren in the adjoining state.

I was at the fag end of my third contract with the university, located in a small township called Zaria, where the population was predominantly Muslim. The people of the town were generally peace-loving and god-fearing; they were also polite and respectful, especially towards expatriates.

After Meera left for India, I spent the weekends with my friend Ram, who lived nearby. It was on one such Saturday that an unusual incident unfolded. After dinner and a Hindi movie with him, I drove down to my residence on campus. It must have been almost midnight.

The road ahead looked deserted at first. Then, I sighted a large group of people at a distance, standing by the roadside. It looked like they were burning something. I slowed down to check what the matter was. But before I could speak, eight to ten of them surrounded my car. It was a bit unnerving. Suddenly, someone shouted from the crowd: "Are you a Muslim?" It was almost a cue.

I hesitated for a moment and said yes.

"In that case you can go, but keep saying you are a Muslim to anyone who asks."

I wasn't going to stay back to argue or clarify. The crowd-turned-mob was burning tyres in the middle of the road to prevent vehicles from passing through. They cleared the path and made way for me to drive on. I heaved a sigh of relief but had a bad feeling about the situation. Why did I say I was a Muslim when I was not? I was worried I would be found out.

I drove ahead and took a left turn towards the university campus. It was pitch dark -- there were no street lights -- but in the car's headlight I could see another large crowd in front of the mosque near the campus gate. I slowed down.

"Stop the car and turn on the light inside," one of them ordered me.

I did as instructed.

"I am a Muslim," I blurted out, remembering what the man had told me earlier. I must have sounded incoherent, my voice lost in the din.

The crowd now surrounded my car; some peered inside, others openly stared. Suppose they find out the truth! Suppose they ask me to recite a verse from the Quran! A shiver ran down my spine.

I did not dare move; I decided to wait for further "orders" from the crowd. Out of the blue I heard a voice piercing through the crowd, "Please do not harm him, he is my teacher." The mob, collectively, turned towards a man who was weaving through the crowd and trying to approach my vehicle. I could not recognize my 'student' but listened to him intently. He asked me to drive slowly so he could walk alongside the car, escorting me to the campus gate.

We were almost at the gate, when a third group sprung out from the bushes. They carried with them lighted torches and petrol cans ready to set my car on fire. My 'student' again pleaded with them not to harm me and repeated that I was his teacher. They were quiet for a moment and then slowly dispersed. The young man suggested I drive to my residence immediately. In my haste to get home safely, I did not even get to thank him for saving my life.

Next morning, I was woken up by my Nigerian neighbour, who was also my colleague in the faculty. He told me he was worried when he did not see me the previous night. It seemed that there was a violent repercussion of clashes between Muslims and Christians in one of the northern states of Nigeria, where many Muslims were severely injured. Several arson attacks had been reported in the short stretch of road leading to the campus during the night: The locals had burnt 13 vehicles belonging to non-Muslims. "They should not have done that," he remarked.

Later, I thought about the stranger who saved my life -- my anonymous student. It must have been a divine intervention that made me lie about my faith. Had I told the mob I was not a Muslim but a Hindu, I would have been attacked, taken to be a Christian. Many of the locals believed that anyone who was not a Muslim would be a Christian, as Hindus were hard to come by in that part of Nigeria at the time.

It was nothing short of a miracle that my 'student' recognized his teacher, from a distance and in the dim lighting of the car, and decided to save me from an arsonist mob! Why did he escort me to the campus gate? It is all the more surprising that even after the situation normalized and despite my best efforts, I could not identify him. Nor did he ever approach me to let me know he had saved my life!

Strange are the ways of the world. Stranger still, because of the unexpectedness, the kindness of a stranger -- one that positively restored my faith in mankind.