It was an angel, in a black and yellow Ambassador, who turned out to be a saviour. 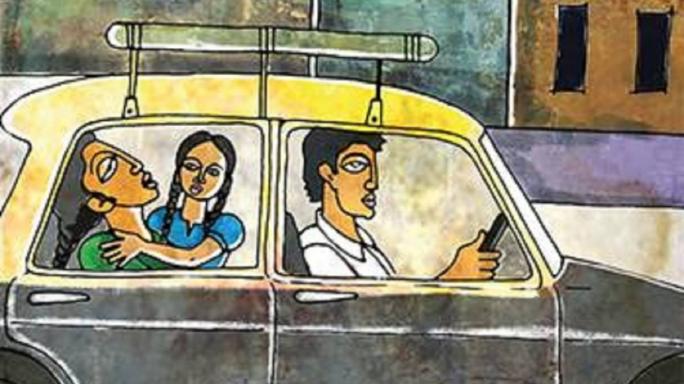 The year was 1964. I was about 16 and lived in Nagercoil, a small town in the southernmost tip of India. From the time I was a small child I had seen my family go through several ups and downs. While my father and elder brother were in Bombay (it was not Mumbai then) to earn a living, I was at home, in our small rented accommodation, looking after my ailing mother, who had been bedridden for 15 years.

I was too young to remember why and how my beautiful Amma, once an accomplished teacher, became so sick. Her body shook violently, often, and she was unable to keep her eyes open. Always petrified something would happen to her, I would lower my head on her chest sometimes to check if she was still breathing. I lived in the fear that Amma would die when I was away to school. This is why I preferred to stay home taking care of her. My childhood was troubled by fears and insecurities.

One day Amma's condition turned serious and she needed immediate medical help. There was a government hospital about an hour way. Dazed and confused, I decided to rush her there. There was no public transport available in Christ Nagar, the neighbourhood where we stayed. Also, Amma was so sick that there was no option but to hire a taxi. Guessing that the fare would be about Rs 2, I hurriedly borrowed about Rs 2.50 from my friends.

On reaching the hospital, when I was about to pay the taxi driver, he refused to accept any money. "Keep it, you may need it to buy food," he said. "Now go in with your mother. I will be at the gate in case you need me." I did not, though. The doctors at the hospital recommended admitting Amma for tests and keeping her under observation.

Later, when I walked back home, I found our front door locked -- the old lock had been replaced with a new one which I did not have a key to -- with all our belongings out in the courtyard. What on earth was going on? Our landlady came out and announced that we could no longer live in her house. She was worried that if my mother died as her tenant nobody would rent her place again. I did not know how to react to this absurd superstition. I had no way of letting my father know what had happened either, and Amma was in hospital. On top of all our troubles, we were homeless now.

With nowhere to go, no one to guide me, and no money, I was frightened and helpless. I sat in front of the locked house for the rest of the day, tired and hungry, the sun beating down on me, unable to think of what to do next.

Back at the hospital in the evening, the doctor referred Amma to a tuberculosis (TB) hospital. Frantic with worry, I pleaded with the hospital dean to let my mother stay the night there. That night I slept in my school, thanks to a teacher who helped me.

Not losing hope -- the taxi driver helping me at every step of the way -- we took Amma to the TB hospital the next morning. She was refused admission as the tests revealed that she did not have tuberculosis. They discharged her so she could recuperate. I spent that night with her in the veranda of a nearby house that was rented out to patients, paying 50 paise for our stay.

Over the course of two days, we had seen several doctors who seemed to agree that Amma's condition was untreatable. Had I been older, and a little less troubled, I would have asked them for the reference of a doctor who could help us with Amma's illness.

The next day, the young taxi driver, who had become like a brother to me, was at the gate once again, waiting, as promised. For some inexplicable reason, he always knew when we needed help. He drove us to Christ Nagar to pick up our belongings and figure out what next.

But where would we go now? Hesitatingly, I told him our story. He was quiet for a moment and then said, "Come with me, sister. We will find a way." With this, he asked me to get into the taxi with my mother. We were not far from our old home, when we met an elderly gentleman, who our family knew well. The young driver pleaded with him and convinced him to lodge us in his home temporarily. We had found a roof over our heads, thanks to my new-found sibling, our taxi driver.

By now, he had ferried us several times without charging a dime, waiting patiently in front of hospitals. He helped at a time when he could have earned money for himself and his family. He was not much older than me -- perhaps in his early 20s, but he was selfless. I remember him vividly to this day -- lean, dusky and clean-shaven, to me he was an angel in a black and yellow taxi.

We stayed at our temporary shelter until my brother arrived from Bombay. We managed to rent a house and shifted Amma there. But alas, we could not save her. Amma passed away that December.

Shattered and disconsolate, I moved to Bombay to be with my father and brother after my school leaving examination. There I completed my studies, found a job as a teacher and eventually met my future husband.

I never did meet our saviour, the taxi driver, again and do not know his name to this day. I regretted sorely that I did not even get to thank him properly. The incredible kindness of this extraordinary man, of ordinary means, changed my life forever. It is a debt I can never pay back.

Dad had been complaining  of blurred vision for a while, so my wife Manju and I took him to an eye institute in Ramnagar, Uttarakhand. The ophthalmologist recommended a quick laser surgery to fix the problem.

Surgery successful, we were on our way out of the hospital. I was about to go fetch my car and bring it to the portico, where Dad and Manju waited, when he started to feel dizzy and fainted. We panicked and shouted for help. However, the narrow road leading to the hospital was blocked by a Muharram procession.

Beside ourselves with worry that we were losing precious time, we begged the bystanders for assistance. Out of nowhere, a youngster emerged by our side. Clearly from the neighbourhood, he quickly spoke to the procession about our emergency, requesting them to make way for us. Soon, the path was cleared so I could bring in the car.

We couldn't find a cardiologist nearby and decided to rush back to Kashipur, where we live. Hurriedly thanking the young man, we sped away. Upon reaching, Dad was wheeled straight to a doctor, who fortunately ruled out a cardiac arrest but started treatment immediately. "If, at his age and condition you had delayed this visit any further, it could have led to life-threatening complications," he added.

Our thoughts immediately went to the young man who had stepped forward to save us those precious moments. But for his timely help, anything could have happened.