How I ticked off George Harrison 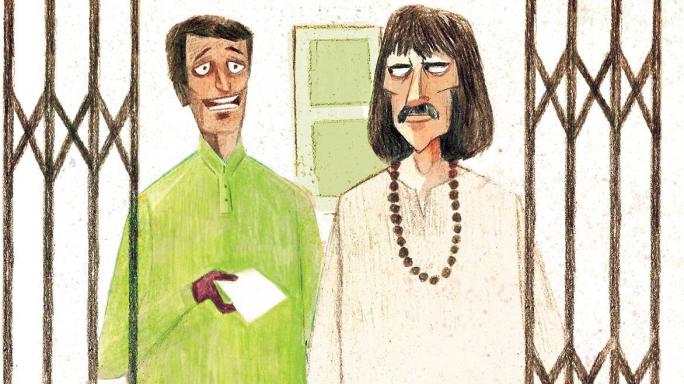 George Harrison was clearly upset. I could tell from the way he was glowering at me. His lips were tight; he looked very ticked off.

We were standing facing the trellis door of an ancient lift on the seventh floor of a crumbling apartment building in Calcutta. The year was 1976. Behind him was the closed door of his house. We could hear the lift cranking up slowly from the ground floor, stopping at every floor. It would take at least five minutes to reach us. I had Harrison all to myself for five minutes. And there was only one question I wanted to ask him.

It had all started as just another uneventful morning in the offices of Junior Statesman (JS), the youth magazine where I was a reporter. Around mid-morning, I was summoned to the editor’s room. Desmond Doig, an Irishman in his 50s, was looking very serious, which meant that he could barely contain his excitement. “Rumour has it,” he said melodramatically, “that a certain George Harrison is currently somewhere in this very city. Rumour adds that he may not be here tomorrow. It is whispered that he will be off to the holy city of Varanasi. Your assignment for the day is to track him down, interview him and thus, get the scoop of your lifetime.”

And so it began.

Calcutta is not a big city; everyone knows everyone else. These were the days before the internet, SMS and WhatsApp, but I was sure that a few strategically placed calls would yield results. I started with the city’s thriving rock-and-roll fraternity. My first task was to sweet-talk Cynthia, the operator on duty at the telephone exchange of The Statesman newspaper, into giving top priority to my calls. Cynthia was a softie, plus she kinda liked me.

She put me through to Nondon Bagchi, drummer with Calcutta’s legendary rock group, Great Bear; Dilip Balakrishnan, their guitarist and singer; Lou Hilt, bassist with another group; Louis Banks, jazz maestro; Braz Gonsalves, another jazz player. Many of them had just woken up. All of them sounded vaguely offended that George was in town and no one had told them.

“Try the night clubs,” said a fellow reporter, “Maybe George has a gig at one of them.” Great idea! I called up Trincas, the Moulin Rouge (no, not the French one, just the Bengali imitation) and Mocambo. But no joy.

By lunchtime, I was no closer to finding George. My job as an investigative reporter was on the line. I was despondent as I went to the staff canteen for lunch. I took the only seat available, opposite the cranky Indian dance critic—a man widely regarded as supercilious and nasty.

“Ruddy prima donna!” he cursed, as he slurped up the mulligatawny soup.

“The whole ruddy family!” he said. “Just because one is a musician and the other a dancer, they think the sun shines from their you-know-wheres, and they don’t have to keep appointments.”

“Which is this artistic family skipping appointments?” I asked absently.

“The Shankars!” he said, slamming the bread into his soup, spilling it all over himself in the process.

“Ravi Shankar?” I asked, my interest piqued. Everybody knew George Harrison was gung-ho about Ravi Shankar.

“No,” said the dance critic grumpily. “Don’t you journalists know anything? Ravi Shankar lives in Varanasi, not Calcutta. I’m talking about his brother Uday Shankar, the dancer.”

“He skipped an appointment with you?”

“Exactly,” he said, frowning. “Said he had a special guest to attend to.”

“And that guest was?” I asked, now fully alert.

“I don’t know,” he said. “Some stupid foreigner who is going to Varanasi tomorrow to buy a clay statue.”

I called Uday Shankar’s house (with a little help from dear Cynthia) saying I had a package for him. Would he be home to receive it? Yes, he would. I said I also had a letter for a Mr Harrison … did any such person live there?

The phone slammed down.

Almost at once, I heard Cynthia’s voice. She had been eavesdropping all morning, and knew everything I knew.

“How about you ask him for an autograph for your dear friend Cynthia who helped you so much today?”

About an hour later, we were in the compound of the mossy old building where Uday Shankar lived. The lift, with its octogenarian liftman half-asleep like the dormouse in Alice in Wonderland, stopped at every floor whether anyone was there or not.

Five minutes later, I rang Uday Shankar’s doorbell. It cracked open and the cook’s head emerged. “Yes? What do you want?”

Behind him, I could see the gaunt face of the most legendary lead guitarist of our times, the third Beatle—George Harrison. He looked worried and anxious. Clearly, being discovered by the press was his favourite nightmare.

I told the cook I had an appointment with Mr Uday Shankar. At this, the door opened trustingly and I walked right into the house. Not missing a beat, Harrison simultaneously walked past me straight out of the house. The door closed behind him. He was outside, and I was in. Not to be outdone so close to my target, I stepped out again, closing the door behind me. And there we were, George Harrison and I, waiting for the infinitely slow lift.

I looked at him. He scowled at the trellis door. He was dressed in pyjamas and a kurta; his hair flowed long behind him. I was absolutely certain of one thing: There was going to be no scoop interview.

I thought of Cynthia. She was probably excitedly telling all her friends she was soon to get George Harrison’s autograph.

I extended my reporter’s notebook towards him, open on a fresh page.

“Could I have your autograph, please, sir, Mr Harrison?” I said. He gave me a withering look.

“I thought you were from the Press, man!” he snapped, and turned away.

And those were the only words George Harrison ever spoke to me. The lift arrived, I departed, and the legend went back into the house.

As for Cynthia, she got her George Harrison autograph. To this day, she believes that George signed it.

Author’s note: My story, What was George Harrison Doing by the Ganges at Midnight? appeared in JS magazine. Harrison died of lung cancer in 2001. In 2013, Martin Scorsese made a biopic on him called George Harrison: Living in the Material World. In one shot, the camera zooms into my 1976 article on the music legend with my byline in clear view.