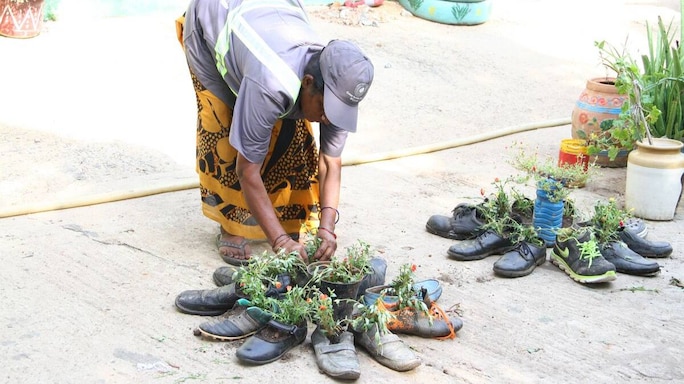 Where there's a will there's a way. Naravarikuppam Town Panchayat, around 20 kilometres west of Chennai proved just that by converting a waste composting yard into an ‘agroforest.’ Waste items like abandoned and broken pickle-jars, tyres, toilet seats, washbasins, and such other are used for growing flower plants. The local officials have also been able to get rid of the stench, thanks to the planting of the Indian tulip tree (Portia tree) that can absorb bad odour around the place. The panchayat even grows vegetables and fruits in the nearly one-acre plot of land. “It used to look like a wasteland and there was a strong stench. But we decided to do something about it,” says G. Sathish, the executive officer of the panchayat.

It took the panchayat about three years to turn around the compost yard into an ‘agroforest’ as they like to call it. “We have plants growing even in abandoned shoes and plastic water bottles,” Sathish says.

“Now people can see that everything is done in the designated spots while the other areas have been cleared and beautified,” Satish says.

Not just flowering plants, the staff of the panchayat also grows vegetables such as tomatoes, different varieties of gourds and onions. The manure obviously is generated within the yard. Thanks to a thick cover of greenery, it has started attracting birds. The yard even has a small duck pond.

The officials hope to turn the yard into a model yard for others emulate in Tamil Nadu and beyond. May it give rise to a thousand such gardens.