Good News: Yamraj To The Recue, A Village Sees The Light Of Day And A Rare Win Against Caste-Based Discrimination

A 50-year-old farmer rescues travellers from flooded Uttarakhand rivers, electricity arrives to a Kashmir village more than 70 years after independence and Dalits in a Kerala village earn their hard-fought right to get haircuts 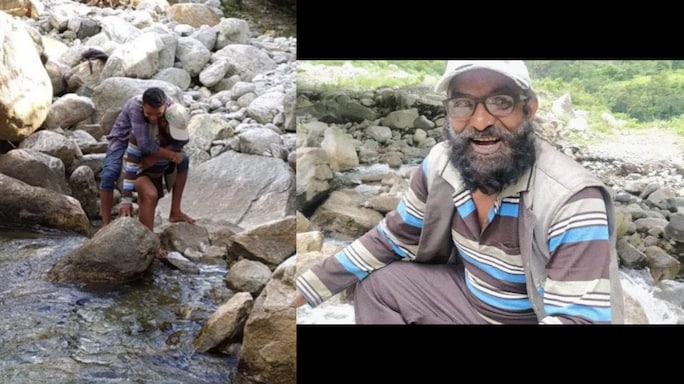 Yamraj to the Rescue

Service: For the last three decades or so, 50-year-old Diwani Ram, from the Bangapani region in Uttarakhand’s Pithoragarh district, has helped thousands of people cross flooded rivulets during the monsoons, when heavy rains destroy bridges connecting nearby villages. But Ram—nicknamed ‘Yamraj’ because he would at times be seen riding his buffalo from place to place—is no ferryman: The intrepid farmer physically carries travellers on his back transporting them across the water through powerful currents, slippery rocks and unpredictable  eddies to the other side.

“My father taught me how to walk in deep waters when I turned 14, and since then I have been doing this work every season. Now, my  son has also joined me,” he tells The Better India.

Many offer payment in return for his services, but Ram has, more often than not, forgone remuneration, preferring to help stranded travellers, such as officers, tourists and locals, for free. With state machinery at work rebuilding bridges, people may soon no longer need Ram’s help, but the altruistic Yamraj—who was even elected Gram Pradhan (village head) of Siling (2015 to 2019)—is sure to find some other way to help his community.

Let There be Light

Development: Overcoming years of stalls, bureaucratic rigmarole and corruption, the 30-odd families of Dunnadi Asthan, a small, remote village in the Shopian district of south Kashmir, finally see the light—literally. The  village gained access to electricity for the first time in August this year, ending decades of having to use candles, oil and solar lamps or torches to illuminate streets and homes.

While efforts to power the hamlet were initiated a few years ago and electric poles were ordered under the government rural electrification scheme, the process was halted by an Anti-Corruption Board investigation. Pulwama deputy commissioner, Yasin Choudhary, took charge of the matter, making a special request for the equipment to be used, sourcing other requirements through various channels and organizing field staff and locals to raise the poles and install a 63 KVA transformer.

With focused, effective leadership, this decades-old need was met in just seven days, proving once again that nothing is impossible when people work together for a common goal. Equality: Members of the Chakkliya Dalit community scored a rare win against the deeply entrenched caste-based discrimination they have faced for generations from dominant-caste residents of Vattavada, a village in Idukki, Kerala. Branded as untouchables, the Chakkliyas have routinely encountered biased treatment, including being denied service by local barbers, forcing them to visit neighbouring towns or rely on each other just to get a haircut.

Fuelled by protests, the Vattavada panchayat mandated that all salons treat everyone equally, but this only resulted in flat refusals and upper-caste residents boycotting shops that followed the rule. In response, the panchayat ordered all salons be closed except for a single, public barbershop that would operate under the strict ordinance that it cater to members of all communities.

Open for business from 14 September, its customers will include upper-caste panchayat president P. Ramaraj, who hopes to lead prejudiced community members by example. Here’s hoping that this decisive strike against hate becomes the norm.