Good Neighbours: Out on a Limb 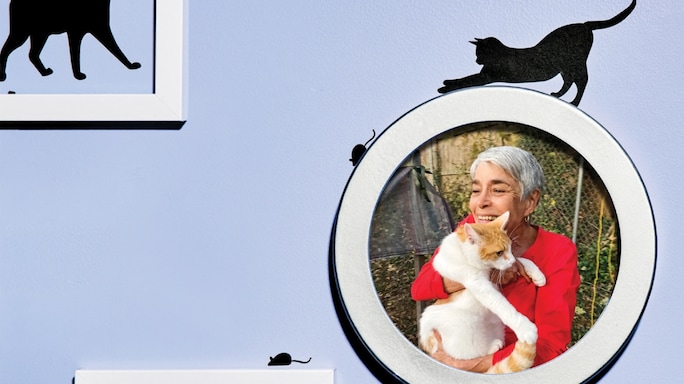 For the most part, Hank, a two-year-old tan-and-white rescue cat, is a homebody—and for good reason. The one time he got out of his yard in Washington, DC, he managed to get stuck in a 60-foot-tall tree for five days and four nights with no food or water.

Hank’s big adventure started last 6 November. Delores Bushong, his 75-year-old owner, had just returned from a farmers market when she realized Hank hadn’t come in for his midday snack. She called his name, in alleys and streets around her home. As it got dark, she began to worry. Then she heard mewling, looked up, and spotted Hank, perched on a branch near the top of a neighbour’s tree.

Bushong believes Hank got under a fence and then became spooked by some dogs. The more scared he got, the higher he climbed. “Cats have an amazing ability to climb up trees, but actually they aren’t that good at climbing down,” said Dan D’Eramo, director of field services for the Humane Rescue Alliance (HRA).

Bushong, now worried about getting Hank down, asked the HRA to take the lead, but it was no easy task. HRA called the fire department, but it declined to help, citing safety concerns. Then Bushong called a construction company to ask about renting scaffolding but was told she would have to book the equipment 48 days in advance.

Next she reached out to a local tree company, Casey Trees, where she volunteers, helping with planting and trimming. But the crew that came out analyzed Hank’s predicament and said it wasn’t safe for a person to go up into the tree because the branches weren’t sturdy. Bushong was crushed. “To realize something you love is in trouble and you personally can’t do anything about it is very frustrating,” she said.

Cue the neighbours. Ed Baptiste, whose tree Hank had climbed, let Bushong sit in his backyard and call to Hank. Another neighbour donated a can of sardines, hoping it might entice the hungry cat to come down. Nearby dog owners took their pets on walks ­instead of letting them out in their yards to avoid further spooking Hank.

One neighbour suggested Bushong call a local business, EJ’s Pest Control, which had a tall ladder. She did, and the owner, Ijeoma Maduforo-Barry, told her she was welcome to it. “I don’t have pets, but I’m human, and I do have a soft heart,” said Maduforo-Barry. Unfortunately, the 42-foot ladder proved too short.

By day five, nothing had worked. That’s when Lydia Krassensky, a veterinary assistant at HRA, told another staffer how her sister and brother-in-law got their cat down from a tree. They created a makeshift pulley system by looping a rope around a tall branch, then raising a basket with some of the owners’ personal items. The cat, lured by the familiar scents, climbed into the basket and was lowered from the tree. D’Eramo decided to try this approach with Hank.

Bushong filled a small crate with some of Hank’s favourite things: catnip, food, a pair of her slippers, a fuzzy blanket. They called it Hank’s party pack. With the help of volunteers from Casey Trees, they used a contraption that shot a beanbag attached to a rope high into the tree.

They got lucky on the first try, as the rope caught a branch directly above Hank. Pulling on the other end of the rope, they positioned Hank’s party pack just beneath him. To their great delight, he jumped in, and they lowered him.

Once on terra firma, Bushong scooped Hank into her arms, cuddling him hard as he purred. Afterward, they went inside and ate, and Hank rested in his favourite chair. The next day, Bushong recalled, when Hank wanted to go outside, “I said, ‘Oh no.’ ” After some fence repairs, though, she let him out in her backyard—where he seems content to stay.

Hank’s adventure taught his grateful owner a lesson about neighbours helping neighbours. “I can’t believe how many people went out of their way to help me with this cat,” she said. “No one ever said, ‘You’re being ridiculous.’ It made me feel good that I live in a neighbourhood where people would do whatever they could to get him down. It gave me hope.”

Love this? Check out more stories of everyday compassion from our readers here.