For Love Of The Written Word

United in their passion for books and stories, these five ordinary folk are on a mission to spread the joy of reading with their unique libraries For years, journalist Sheik Sadiq Ali has dabbled in various businesses—a matrimonial bureau, real estate, but his greatest happiness came from the children who rushed over to receive the books he distributed from his pushcart, or thopudu bandi in Telugu.

As a one-time book-retailer, he realized that many children couldn’t afford books so he decided to distribute them for free. In 2015, Ali began travelling around Hyderabad handing out poetry and storybooks among children. He then started taking his mobile library beyond the city too.

At 57, Ali claims to have travelled more than 3,000 kms pushing his cart across Telangana on foot, even in the remote interiors of the state. “I have distributed books worth more than Rs 50 lakh so far. I have also set up around 150 libraries in village schools, panchayats and youth clubs,” he says. Ali says that 90 per cent of whatever he and his wife, Usha Dayal, a government servant, earn is used to buy books to give away.” We are a childless couple, so whenever we see any young person who has a hunger for knowledge, we consider these children our own and want to help them grow,” he says.

With the coronavirus pandemic putting the breaks on Ali’s donation circuit, he is now on a different mission—arranging access to mobile phones for poor children, so they can access online classes. “Everybody, including government schools, are touting online classes for children. But how will poor kids, who don’t have slippers for their feet, afford expensive mobile phones to attend lessons? But I am doing my best to arrange phones for those who really need it. It’s a drop in the ocean, but I am trying,” he says. He uses Facebook and other social media handles to encourage netizens to contribute.

True to his mission of spreading a love of reading, Ali is also building a library in Kallur, his village in Telangana’s Khammam district. He has no plans to pack up his pushcart library however. “Sharing books with kids gives me the utmost happiness. We will be back on the streets once the pandemic recedes,” Ali says.

As a barber, Pon Mariappan is fairly skilled, but in his home town of Thoothukudi (formerly Tuticorin), 670 kms south of Chennai, Tamil Nadu, this 39-year-old is better known for something far more interesting. Amongst the cans of shaving foam, aftershave lotion and other salon equipment on the shelves of his 10x10 ft salon, more than 1,500 books—Tamil and English novels, history texts, poetry collections, autobiographies, periodicals and other tomes—jostle for space. This treasure trove of reading is a labour of love for Mariappan—a library that would enable a culture of reading and knowledge-building in his community. “Most customers, many of them young students, would be busy gaming on their mobile phones. I wanted to encourage them to read instead. Why not offer them something better?” he says. Being surrounded by books was Mariappan’s dream ever since he was a child. “I had to leave school in class eight as my family couldn’t afford my schooling, but I never lost interest in reading,” Mariappan, who worked as a labourer and did other odd jobs to make ends meet before taking up the tools of his current trade. When Mariappan first started the salon– library in 2015, he selected biographies of famous Tamils such as Periyar, Annadurai and A. P. J. Abdul Kalam. Since then, his collection has only grown. Most of the books are bought by him, while others are donated.

Over the last six years, his visitors and customers have included several celebrities, including politicians, writers and film stars. His business has now resumed after remaining shut for months during the nationwide coronavirus lockdown. A father of three, Mariappan says that he wants the younger generation to think beyond their regular school curriculum. He even offers a discount on salon services to students who are willing to read a certain number of pages of a book and produce a small synopsis. “The aim is to inculcate the habit of reading—something our youngsters are losing,” Mariappan says.

Youngsters glued to online games on their smartphones was also a concern for Ngurang Meena, a school teacher in Nirjuli, a small town in Arunachal Pradesh’s Papum Pare district. The 30-year-old social-science teacher, who runs the Ngurang Learning Institute—an adult literacy centre—says that she feels disheartened every time she reads student papers. “The graph of student performance is falling every year. It breaks my heart whenever I see answer sheets—basic grammar skills are missing and there’s an absence of any cohesive expression. They lack guidance and reading culture is almost zero,” Meena says. When her school and the centre she runs had to close due to the Covid lockdown, the social worker in her wanted to do something to address the problem.

Inspired by a similar initiative in Mizoram, Meena set up a bookshelf with around 80 books as well as some benches on the side of the road in Nirjuli on 30 August 2020, where passers-by could spend time reading. The selections include motivational books, biographies and novels as well as comics for young children. “I have to bribe the younger ones with sweets to sit and read, but that is okay,” she laughs. 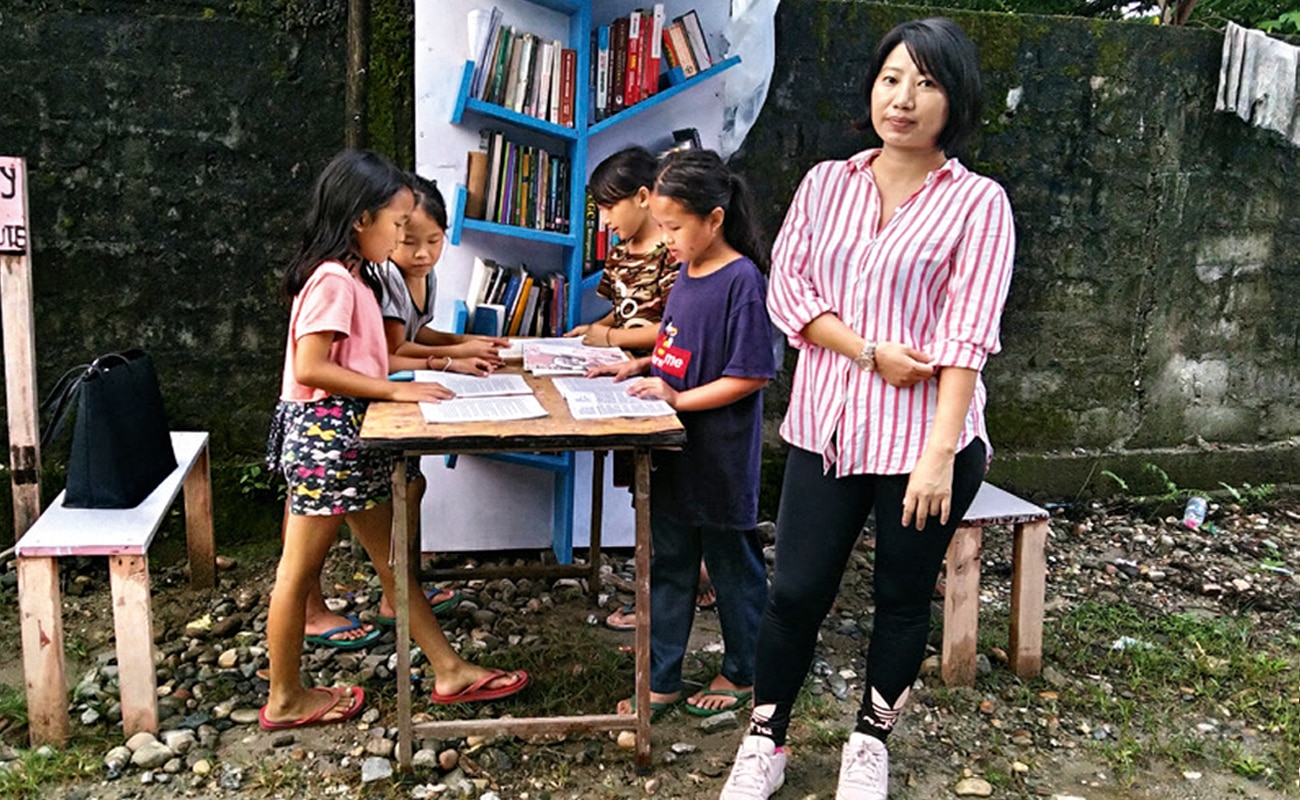 Meena’s library became a hit among youngsters who spend hours in the reading corner. Within two months, her effort became the talk of the town.

Generous contributions of books come in from the public and she is even receiving requests to set up such libraries in other parts of the state, including one in the capital, Itanagar. Since the tiny library is far from the main town, she also lends books out to those who want to read at home.

“I never thought that this would become such a big inspiration,” Meena says. “Since childhood, we were told that books are our best friends. The next generation of kids is focussed on games and other things. I don’t want them to stray,” she adds.

Nestled deep in the Edamalakkudy forest, in the Idukki district of Kerala, is the Mulakutharakkudy School—home to the Akshara library, a veritable pilgrimage point for book lovers from the neighbouring countryside. Founded in 2012, Akshara came to be when tea-seller P. V. Chinnathambi met P. K. Muraleedharan, a primary-school teacher who visited the stall as a customer. Chinnathambi expressed a love of reading, prompting Muraleedharan to loan him some books.

As the collection grew, the duo felt the book bank should be shared with other bibliophiles. “I told him that he could encourage others do the same by having books in his tea-stall,” says Muraleedharan, who is called Murali maash (‘teacher’ in Malayalam) by the tribal families, who live in the forest. The books were made available for customers during working hours and packed up in the evening but when the process became too cumbersome Chinnathambi sought a better way to share them. In 2017, Muraleedharan offered to move the collection to the Mulakutharakkudy government school, where he once taught.

The library, now comprising 1,500 volumes of novels, history books and classics, is free for the public to peruse. Muraleedharan enthusiastically recounts how the library stayed open even during the pandemic as the only source of information and entertainment for the area. “That is the strength and significance of Akshara. People care for it as if it is their own,” he says.

A paperback copy of Edward Said’s Culture and Imperialism, sits next to an old, hardbound edition of Ian Fleming’s Goldfinger. Classic novels by George Orwell and Ursula K. Le Guin lie on other shelves along with contemporary literature and classics in English, German, French and Russian.

These are just some of the 350 books housed in the ‘Travellers’ Library’, a nondescript, two-storey, wooden house on the banks of Srinagar’s Dal Lake. Its creator is 50-year-old Muhammad Latif Oata—a high-school dropout. While Oata lacks the required schooling to read these books himself, the stories they tell hold great value to him regardless. Forced to drop out of school and move out of Kashmir to support his family in the early ’90s after the onset of militancy in Kashmir, Oata was only 16 when he moved to Goa and then Karnataka, where he sold handicraft items from his home state. 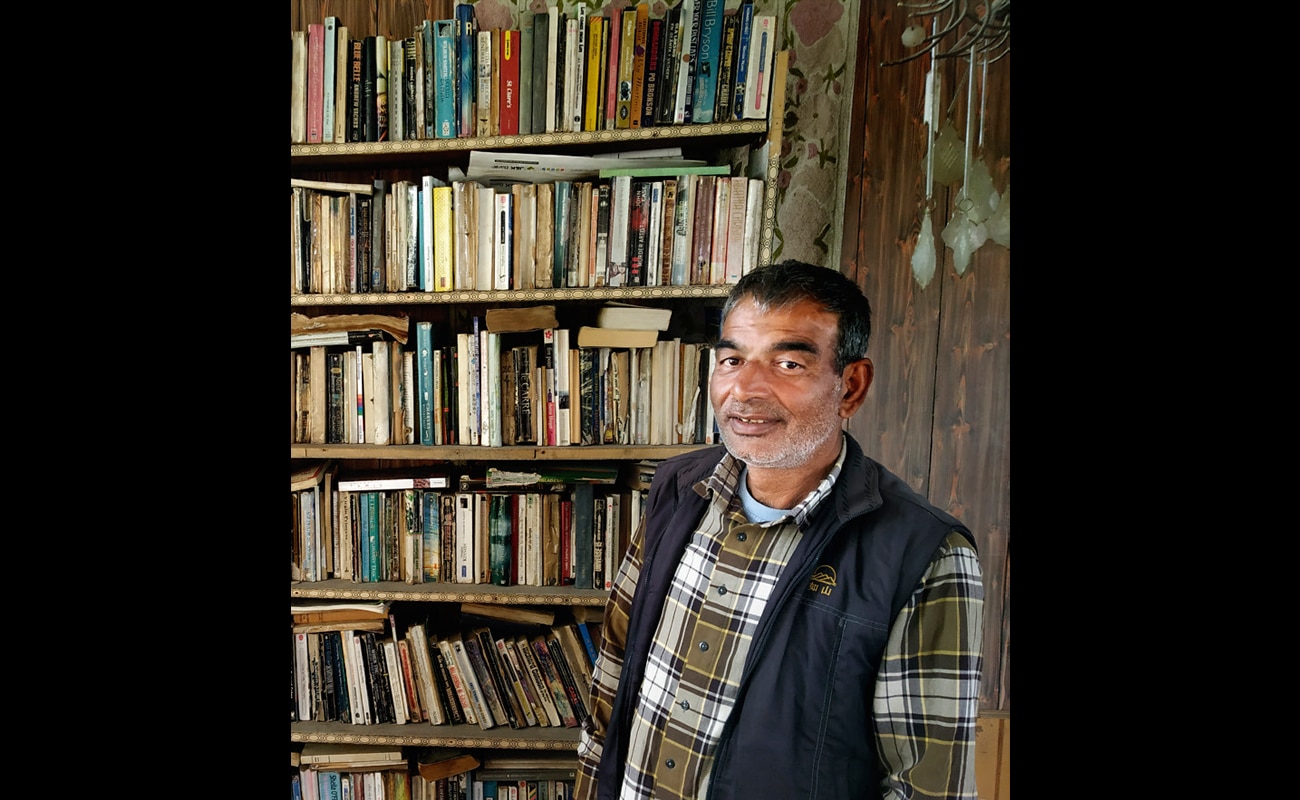 One day, a foreign tourist passing by his stall gave Oata a book that he was done reading. Unable to read, he asked the tourist to tell him the story. It was about a poor, young girl in Kerala who gained success despite great struggle. Inspired by the tale and hungry for more, he began a barter-like system where anyone borrowing a book would have to give one in return and tell him the story.

Oata’s collection grew to around 600 by 2003, but floods damaged around 200 of them since then. “They are my most prized possessions,” Latif says with pride in broken English he’s picked up from conversing with tourists. When Latif returned to the valley in 2007, he set up a small travel agency with a library for visitors to enjoy.

Over the past year, however, trouble in the state has reduced footfall to a trickle and Latif ’s business has also suffered, forcing him to take on work as a casual labourer. How long will he take care of the books and keep his small library open? “As long as I am alive,” he says with a smile. “And even when I am gone, these books will remain there … because books always find readers.”

Do You Like This Story?
36
1
Other Stories
Please enter valid text
Must Reads
Latest Issue