Within seconds, the car carrying four Dutch tourists was swept down the hillside by the raging waters 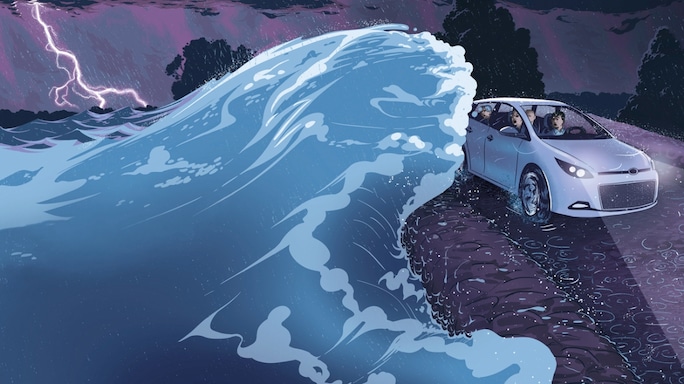 Marjon van Eijk was incredibly excited. The 57-year-old from Oss in the Netherlands had just landed on the Spanish island of Mallorca with her family for the dream wedding of her daughter Iris. She knew it was going to be very special.

The intimate ceremony with just 21guests was happening the next day,10 October 2018, at a stunning villa up in the hills near the picturesque town of Sant Llorenç des Cardassar, just under an hour’s drive from the airport.“I can’t wait for the barbecue tonight, never mind the wedding,” Marjon told her mother, Bets.

Bets was a sharp, warm-hearted 84-year-old, but she wasn’t in the best of health. A year earlier, she’d had to have emergency surgery on a perforated intestine and now wore a colostomy bag. Hip problems meant she had to walk with crutches. But she was thrilled to be attending her 24-year-old granddaughter Iris's wedding in such an amazing setting. The family had brought along a nurse, MarjonTheunissen, to help her.

The three women and Marjon van Eijk’s husband, Pieterjan, walked out of the airport at around 6 p.m. and into a rental car. Iris and her fiancé, Coen, were waiting at the beautiful property up in the hills, thrilled at the prospect of sharing such a magical event with the ones they loved.

On the road to Sant Llorenç, the family gazed at Mallorca’s rugged countryside, with its rolling, rocky slopes peppered by wispy grasses and low green trees. As they crossed the hilly landscape, the evening was drawing in and rain was falling heavily. But that didn’t detract from the beauty of the island, off Spain’s eastern coast. They chatted happily. Pieterjan, a quiet but funny, intelligent historian, kept them amused with witty observations from the driver’s seat.

They had no inkling that the rain-fall—more than 230 mm (nine inches)would fall that day—had already reached dangerous levels. As they drove beyond the town of Sant Llorenç and up the winding road around 804 metres into the hills, the rain got harder and the sky grew darker. They were approaching a bridge over what was normally a small stream when, without warning, a wave of dirty, fast-moving water washed over the top of it.

Within seconds, the torrent had lifted the little white car into the now raging river and sent it surging down the hillside. It all happened so quickly thatMarjon and her family were too shocked even to scream.

As the car lurched and spun through the water, its roof scraping the underside of a couple of bridges, they clutched the seats and doors in numb disbelief.

The flood carried the car back through Sant Llorenç, which was now engulfed by several metres of water. On and on the vehicle went, into scrubland a few hundred metres south of the town where, finally, it caught on a submerged object in the middle of the torrent.

Marjon, the mother of the bride,felt water swilling round her feet and looked down. Muddy brown flood water was pouring into the car and rising quickly. Although fairly small and bespectacled, she was a strong person with a big heart, always determined to protect her family. Sitting in the backseat with her mother's nurse, she knew they all had to get out quickly before the waters rose too high in the car and they all drowned.

Forcing the back door open, she jumped into the flood. Bets’ 52-year-old nurse followed. Marjon grabbed the front door handle and tried to open the door to reach Pieterjanand Bets sitting in the front seat,but the water pressure on the door was too much.

Suddenly the rising water, flowing in the churning torrent, flipped the car on its roof, leaving Pieterjan and his mother-in-law hanging in their seat belts as water rose towards them.This is the end, he thought, terrified.

But then just as suddenly another rush of water flipped the car—still caught up—back the right way up. Braced against the current, Marjon got a grip on a back door handle and, using all her strength, was able to pull the door open. She hauled Pieterjan and Bets between the two front seats and out of the vehicle, coughing and spluttering. But the danger was far from over.

The four of them clung to the back of the car as the waters, now at chest height, rushed over them. They were being battered by debris, including branches and pieces of metal. The sky was completely dark, illuminated only by occasional flashes of lighting,as the rain continued to pelt down.The flood waters were more than73 metres across, with the Dutch tourists trapped almost in the middle.

Pieterjan screamed for help. I don't think anyone can even see us, let alone hear us, thought his wife. We don't have a chance.

Gento Galmés stared out of the window of his small summer home in disbelief. The tanned, dark-haired 57-year-old council administrator had just made a harrowing 1.5 km car journey from Sant Llorenç through rain so torrential that it was almost impossible to see. The narrow, usually empty stream a hundred metres or so away had overtopped and water was now flooding over the rocky ground towards his property.

He’d come to pick up his daughter, Margalida, 24, intending then to get back to his home in Sant Lorençand find his wife, who worked as a housekeeper in the town. But the flood waters stopped him.

His neighbour Miquel Montorocame out of his summer house. It was now well past 7 p.m. and dark but, illuminated by the lightning, Miquelcould make out 10 or more cars in the flood waters. Suddenly, just carrying over the roar of the water, he heard screams coming from a white car,30 metres or more out into the torrent. Gento heard the screams, too,and rushed out to join his neighbour.

“We’ve got to do something,” he told Miquel.“If we don’t try, we might hear those screams for the rest of our lives,”Miquel said. Miquel shone his van headlights across the water towards the car so they could get a better idea of what had to be done. But even with the headlights, they still couldn’t really see any details—not even how many people they might need to rescue.

They could, however, see how far they would have to go into the fast-flowing waters. They roped themselves together like climbers: Miquel, a strong, burly 47-year-old blacksmith,would be the anchor, feeding Gentothe line as the latter pushed through the flood. Gento, like his neighbour,had wound the rope around his middle but with a length remaining free, so he could throw the loose end to those needing rescue.

They started into the water and towards the car. The Dutch family spot-ted the headlights and screamed even louder for help. Along with the occasional flash of lightning, their cries were Miquel and Gento’s only real guide as to exactly where they were.

The two men could feel themselves sinking into churning mud but, according to plan, Miquel stood firm whileGento fought the current to struggle ahead. Gento was tough, but at barely more than five feet two inches tall, the torrent was soon up to his chest.

“Don’t go any further,” Miquelshouted. “The current will take you.”But Gento wouldn’t stop, not with desperate people almost within reach. Fridges, pallets and even whole trees were flooding by on either side of them. A gas cylinder smashed into Miquel’s ribs. Both men knew that something bigger could send them flying to their deaths at any moment. But they were driven by pure adrenalin.

It took Gento ten minutes to get within 10 metres of the car. He could see four figures clinging on to the back, terror etched on their faces. They pleaded with him for help in what little Spanish they knew:“Ayuda! Ayuda!”

Bracing himself, Gento threw them the end of the rope. After several attempts Pieterjan, who was closest, caught it. Gento gestured to him to tie it around his waist, then he steadied himself, ready to pull the Dutchman towards him.

Pieterjan stumbled through the water. Weighed down by a heavy jacket,he lost his balance and plunged beneath the surface. But he struggled back to his feet and Gento hauled on the rope until he was close enough forPieterjan to fling his arms around him like an octopus. Worried Pieterjanwould drag them both under, Gento,with Miquel pulling on the rope, got him to safety as quickly as possible. They hoped that the tall 60-year-old might be able to help rescue the others, but Pieterjan was dazed and shaking with shock. Gento turned his efforts back to the three people still clinging to the car. After bringing Bet’s nurse to safety, he went back for Marjonand her mother. Then suddenly, before anyone could stop her, Marjondived back into the car to grab her mother's medication.

Then the two women made their way through the flood, Marjon straining to hold her mother up through water that was almost upto the old lady’s neck. They made it safely to Gento and then continued on towards Miquel. But just as they reached shallower water, Bets lost her balance and fell to her knees in the mud. Gento and Miquel tried to lift her but she was too heavy and was unable to help herself.

Miquel knew they had to move her out of the water fast, before the flooding became any worse. He rushed off to get a wheelbarrow and he and Gento were finally able to move Bets to dry land.

The rescued Dutch family, the nurse and Gento gathered in Miquel’s house. The water supply wasn’t working properly, and Miquel couldn’t offer the group a warming shower. Instead, the Spaniards gave them blankets and any clothes they could find.

Marjon Theunissen and Margal-ida, Gento’s daughter, who was also a nurse, tended to Bets. She needed to get to a hospital fast. But with no mobile signal, there was no way of calling an ambulance. Besides, the track leading up to the main road to Sant Llorenç had been washed away.

Miquel had no option but to try to restore it, using his tractor. After an hour or so it was passable, and the Spaniards took the family up to around about where local police were directing traffic around blocked roads. The Dutch group were taken to a shelter and then Bets was rushed to hospital where she was checked over and released the following day.

Later that evening Gento drove to Sant Llorenç to reunite with his wife The town looked like an earthquake had hit it, with debris everywhere and cars piled on top of each other.

Back at his main house, Miquelfound his partner and friends glued to news reports and frantically contacting loved ones.

”Thirteen people lost their lives that day, during what was one of Mallorca’s worst flash floods in living memory.In June 2019 King Felipe VI presented Gento and Miquel with the Spanish Order of Civil Merit. In October of that year, in Sant Llorenç’stown hall with the Dutch family looking on, the two men were awarded the ‘medalla de honor por ayuda desinteresada’ (the Medal of Honour for Selfless Help). Iris and Coen were married in a simple ceremony in the Netherlands.