A teacher is on a mission to eradicate hunger and save lives. 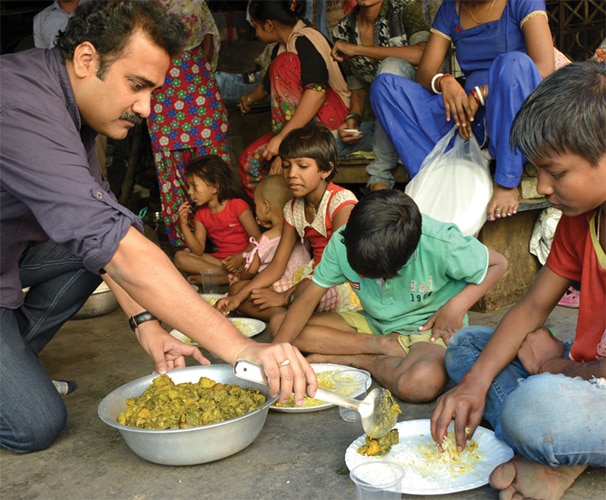 It was the summer of 2015. Eight-year-old Srideep's birthday party had just ended. The boy's father, Chandra Sekhar Kundu, a computer science teacher at Asansol Engineering College, who had stepped out to get rid of the trash, was singed by an image of hunger. "After dumping the garbage bag with leftovers I saw two children scavenging for food in a dumpster. It was midnight and I had no means to offer them anything," Kundu says.

He decided to get to work the next day, starting at his college, involving students. Together they made a film on food wastage to reduce it on campus and raise awareness.

In May 2016, he filed a Right to Information petition before the Food Corporation of India, and calculated that around 22,000 crore metric tons of food grains had been wasted in the past two years. "This could have fed 1 crore children for one month through midday meals," he says.

FEED (Food Education and Eco-nomic Development) was born the same year. Today it has 165 student volunteers, saves roughly 150 plates of food daily and feeds children from Asansol and Kolkata. The organization is also a partner in the SAVE FOOD Initiative by the Food and Agriculture Organization of the United Nations. Kundu used this platform to pool ideas from other countries and put them into practice. To inspire volunteers to help raise funds, Kundu invited people to experience their work. Rather than accept money from volunteers, FEED encourages them to help out with tasks and relies on social media for their recruitment.

"Initially contributors were reluctant, worried about the shelf-life of food and children getting sick if not served on time," Kundu says. A week-long trial run with restaurants, to reassure them that the food would be consumed within three hours of being picked up, helped.

In April this year, they installed a food rack in Gariahat (south Kolkata), inviting people to drop off unwanted edibles like pre-packed noodles, cakes, biscuits, jams and fruits. There's a plan to replicate this in 10 places across West Bengal over the next six months. FEED is also working with the Indian Railways to reduce their food wastage. The donation process currently depends on a WhatsApp network. Next up is a mobile app to streamline it further. FEED has also set up a school and a small library for 37 children in Asansol and plans to open similar institutions in other locations in West Bengal, Jharkhand and Bihar. They hope to save over one-lakh plates of food this year.

As thousands of children go to sleep hungry, Kundu and his team have a simple mission: to bring them a hot and healthy meal.