Even After His Murder, Ankit Saxena's Parents Are Still A Symbol of Hope

Even though this is not a love story with a happily ever-after, the story of Ankit Saxena, the resilience and wisdom of his parents and their commitment to humanity brings immense hope in these strange times. 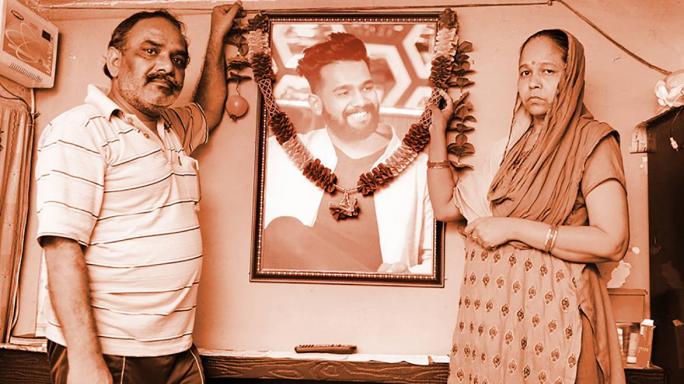 This is not a love story with a happily-ever-after, though it could easily have been. This is a story about love trumping hate, of resilience in the face of unimaginable tragedy, the triumph of sanity, liberalism and tolerance over bigotry and partisanship, and the victory of rationality over unreason. This is a story of hope, breaking the binary of life and death. This is the story of Ankit Saxena. He was murdered in February this year, yet he lives on.

A young man, just shy of turning 24, Ankit was the only child of parents Yashpal, 59, and Kamlesh, 42, and the sole earning member in their lower-middle-class household. A wedding photographer by profession, with youthful optimism, he dreamt of running a studio and having a business of his own. Growing up he was shaped by the internet, and he made funny, sometimes silly, videos with his friends that have now been viewed over nine million times on YouTube. In the prime of his life, he should have had many productive years ahead of him. That right was taken away from him. Why? He dared to love someone outside his community.

Ankit met Shehzadi as a teenager. They had been neighbours in a housing development in west Delhi's Raghubir Nagar for a decade, where the residents are a composite of different faiths, communities and social backgrounds. There are a few inter-faith couples, too, which lends an air of progressiveness to this tight-knit community. They were friends for years before they fell in love. Their families, unaware of their intimacy, were on cordial terms.

Shehzadi, 19, came from a conservative and deeply patriarchal Muslim household. As soon as her parents got a whiff of her relationship with Ankit, they quickly moved to another house, a couple of blocks away, and made sure she never left the house unattended. They tried to marry her off, even putting her under house arrest when she refused to stop seeing Ankit. His family didn't know about their relationship, but his friends did.

As we meet the family in their one-room apartment, his father Yashpal's wan smile of greeting doesn't quite reach his eyes. His vacant eyes glisten with unshed tears, and his voice trails off as he states the obvious: "This is the 21st century, after all ... you only hear about such things in the news ... never thought ... if they [Shehzadi's family] had a problem, they should have come to us ... said something ... we have known them for years ..."

He has been over that day's incident over and over again, recounting it endlessly to the media, the authorities and curious well-wishers. He enters into a trance-like state as he goes over the graphic details the night of the murder. He has spent hours going over the last few days before his son died, speaking to his friends, scanning phone and chat records, retracing his footsteps, trying to recreate and relive the last moments with Ankit, to understand why someone would want to kill his boy.

His mother doesn't speak much, often staring blankly with glassy eyes. She murmurs, "He was a good boy," and then falls silent. It is impossible for her to fathom why her son would be so suddenly and brutally murdered.

On the evening of 1 February, Yashpal recalls a worried Ankit rushing into their flat on the first floor, dumping his bag and photo equipment on a stool and pacing the room for a few minutes, before rushing out again. He came back in, hesitating at the doorstep, as though he wanted to say something to him. But then he changed his mind and was out of the door before Yashpal could ask what was on his mind. He had no idea that it was to be the last time he saw his son alive at home.

The next thing he knew, at around 8 p.m., he received a call from one of his son's friends to step outside---a fight had broken out and Ankit was somehow involved. As he dashed out, he saw neighbours rushing to the market near a school for the blind in the locality, where a commotion had broken out. A heart patient, he tried to walk slowly, urging his wife to rush ahead and see what was up. He picked up his pace as he heard someone mention Ankit's name. On the streets, a huge crowd had gathered: Yashpal could make out a man was being beaten up.

To his horror, it turned out to be Ankit. Shehzadi's parents Akbar Ali and Shahnaz, her 15-year-old brother and uncle, Mohammad Salim, had accosted Ankit, asking him the whereabouts of their daughter, who had left home earlier that evening, locking them up inside. They had guessed it was to meet him. As Yashpal tried to break through the throng of bystanders, he saw his son fall. While being kicked in the stomach, he pleaded repeatedly, "Let's go to the police station and settle this there." But Shehzadi's father, egged on viciously by her mother, wouldn't stop raining down blows on him. The other two men threw in a few kicks and punches as well. These details are all captured in the police report.

Shahnaz attacked Kamlesh as she tried to free her son, pulling her hair and beating her, all the while showering verbal abuse. As Yashpal rushed to protect his wife, he saw, from the corner of his eye, Ankit get on his feet. As he tried to make way to be by his mother's side, the male members of the girl's family surrounded him. Her uncle and brother restrained his hands while her father pulled him back by his hair; there was a glint of silver as his right hand moved swiftly left to right around Ankit's neck. And then he saw Ankit fall.

There was blood all around. Ankit, pointing to his neck, had slumped into a sitting position on the footpath and then fell to his side. No one came to his rescue, barring his ageing parents. His friends had gone to get Shehzadi from a nearby metro station, where she had asked to meet him, and bring her to the police station, on his instructions, according to police reports. As the situation got out of hand, Ankit had the presence of mind to seek police assistance and do the right thing. A full description of the horrific events of that night is stated explicitly in the 250-page charge sheet, which lists over 30 eyewitnesses.

Ankit had bled to death by the time his parents were able to take him to a hospital. It was Shehzadi who led the police to the locations where her family members, allegedly responsible for the murder, were hiding. They are currently in judicial custody, and the juvenile in an observation home.

As the story broke, it swiftly took on communal overtones. Many religio-political groups, which Ankit's parents refuse to name, reached out to the family. "'You just say the word (hinting at stirring up communal trouble),' they would say. What's the point: my son is gone, I don't want any more deaths," rues his father. The neighbourhood was on high alert for a while; the threat of rioting, violence and backlash imminent. Things could have escalated quite easily, if it wasn't for the Saxena family's resilience and wisdom.

Ashish Duggal, Ankit's cousin, who has been supporting the Saxenas with the court case, dealing with the press and managing the social media pages in his young cousin's memory, says Ankit wouldn't have wanted to be remembered for spurring enmity, polarizing people and spreading hate. He has set up the Ankit Saxena Trust, a non-profit that seeks to bring different social groups together, especially youngsters, through community activities, such as blood-donation camps, talent shows and counselling.

One of the first things they did was to organize an iftar party during the holy month of Ramzan for their neighbours, a Muslim family living right across from the Saxenas' flat. The two families have stood by each other through thick and thin. It was a feast that was attended by scores of supporters. Delhi's chief minister Arvind Kejriwal and BJP politician Manoj Tiwari had visited the Saxenas earlier during a memorial for Ankit, as a show of solidarity.

Ankit's family wants justice for their son, not revenge. They want the culprits brought to book, as soon as possible. (The sorry state of the legal system is another story: a fast-track case, it is yet to be heard by a judge.) They cannot bring him back, but they know they can do their bit to prevent such tragic deaths in the future. Through his story, they want to inspire people everywhere to abandon prejudice for tolerance, to strive for peace and harmony and create a world of reason and compassion where people can live as one.

This story has many heroes, and Ankit Saxena's reminds us there is one in each of us.