Each One a Champion

India’s para-athletes made history in Tokyo, but the story of how they got there is a true lesson in grit First, let the numbers sink in: India picked up five gold medals at the Paralympic Games in Tokyo this year. That’s more gold than ever won in the last 11 editions of the quadrennial event in which India participated. This year’s contingent featured 54 athletes. At Rio de Janeiro in 2016, there were only 19. And the previous best of four medals was bettered to 19 this time around—that number is also seven more than what India picked up since its first participation at the Paralympics in 1968.

It has, predictably, taken a medal haul to brings India’s para-athletes into the spotlight, but until even a few months ago, they were an invisible force, training in various arenas across the country, just as hard as their able-bodied counterparts.For most of them, it’s been a story of perseverance—embarking on a journey of discovery that would test the limits of their abilities. But what they didn’t realize was an obvious truth—they became champions on the day they first stepped out on a sporting field.

There’s a common notion that runs in the world of sports—‘start ’em young’. Most world champions, we hear, picked up a racket or kicked a ball at about the same time they took their first wobbly steps. For para-athletes, though, this story is often different. Sharad Kumar, for instance, might well have won bronze in the high jump T42 category event, but the sport wasn’t the first, natural choice for him.

With crime syndicates making life perilous in Bihar’s Motipur, Kumar’s father, Surender, bundled him and his brother, Shallaz, off to St. Paul’s, a boarding school in Darjeeling, at a young age. After being administered a spurious polio drug at the age of two, Kumar’s left leg was left paralyzed and Shallaz had looked out for him since. 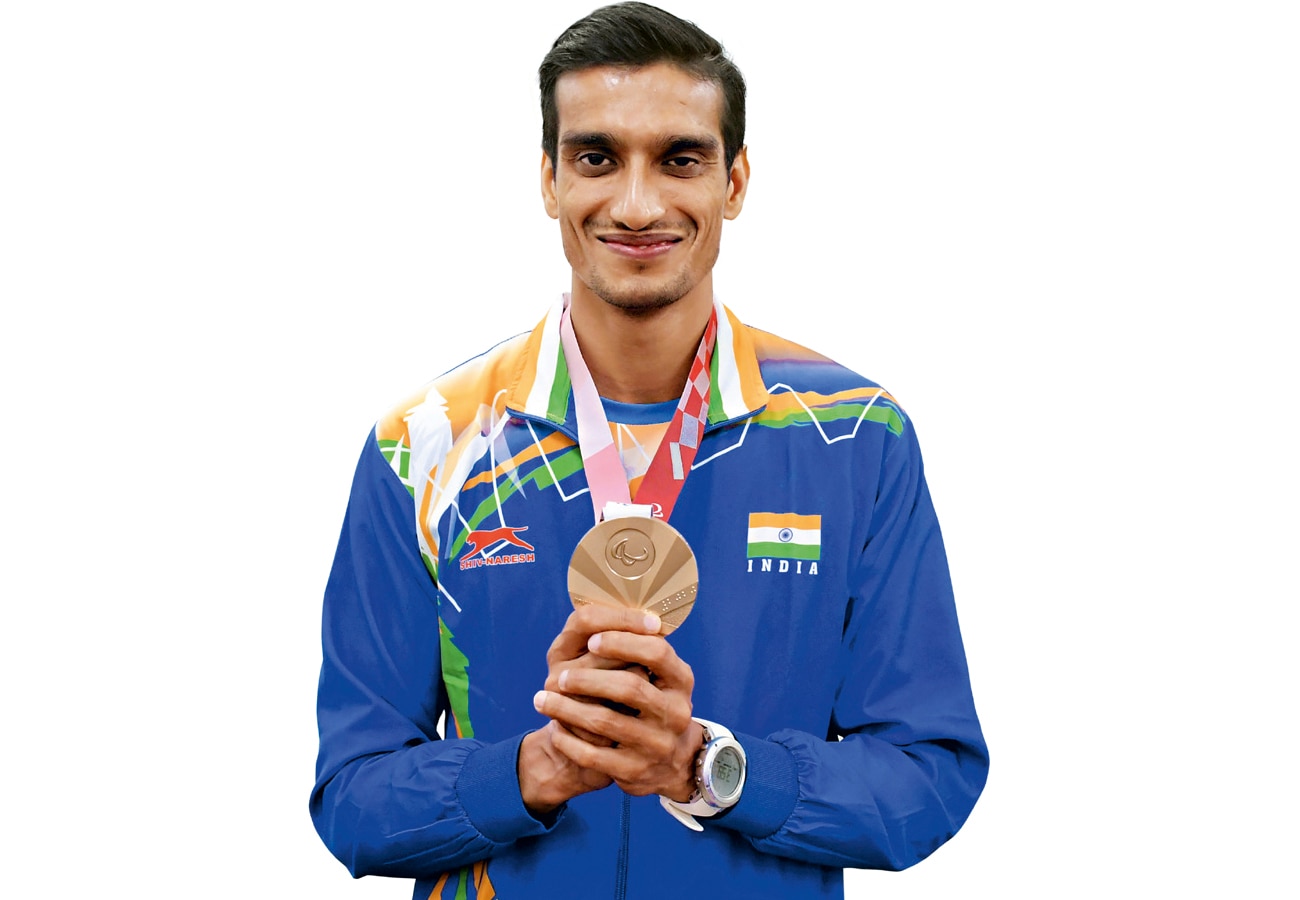 In Darjeeling, Kumar was exposed to nearly all sports and he played them all, but when it came to high jump, his only job was to set the bar for the other boys. “I would play everything, go on long hikes, even walk the entire marathon route, but the high jump was out of bounds. The other boys worried. I couldn’t afford to injure the one good leg that I have,” Kumar recalls.One afternoon when his friends were away at lunch, Kumar pulled off a graceful Fosbury Flop all by himself. He ran to his brother, announcing his exploits. The following day, Kumar started training under Shallaz’s watchful eye, oblivious to others’ concerns. “You know how it is at boarding school—if you’re good at something, everyone respects you. I was never made to feel I was different.”

Like Kumar, archer Harvinder Singh’s left leg was impaired when he was only one. An injection that a doctor gave him for dengue had an irreversible, adverse effect. The bronze he won in Tokyo was the first archery event India had won at the Paralympics. Singh remembers being an ace swing bowler, a handy wicketkeeper and a regular at the volleyball ground in Haryana’s Ajitnagar: “The atmosphere was such that I was always treated as an equal in my village. There was no sport I couldn’t be part of.” 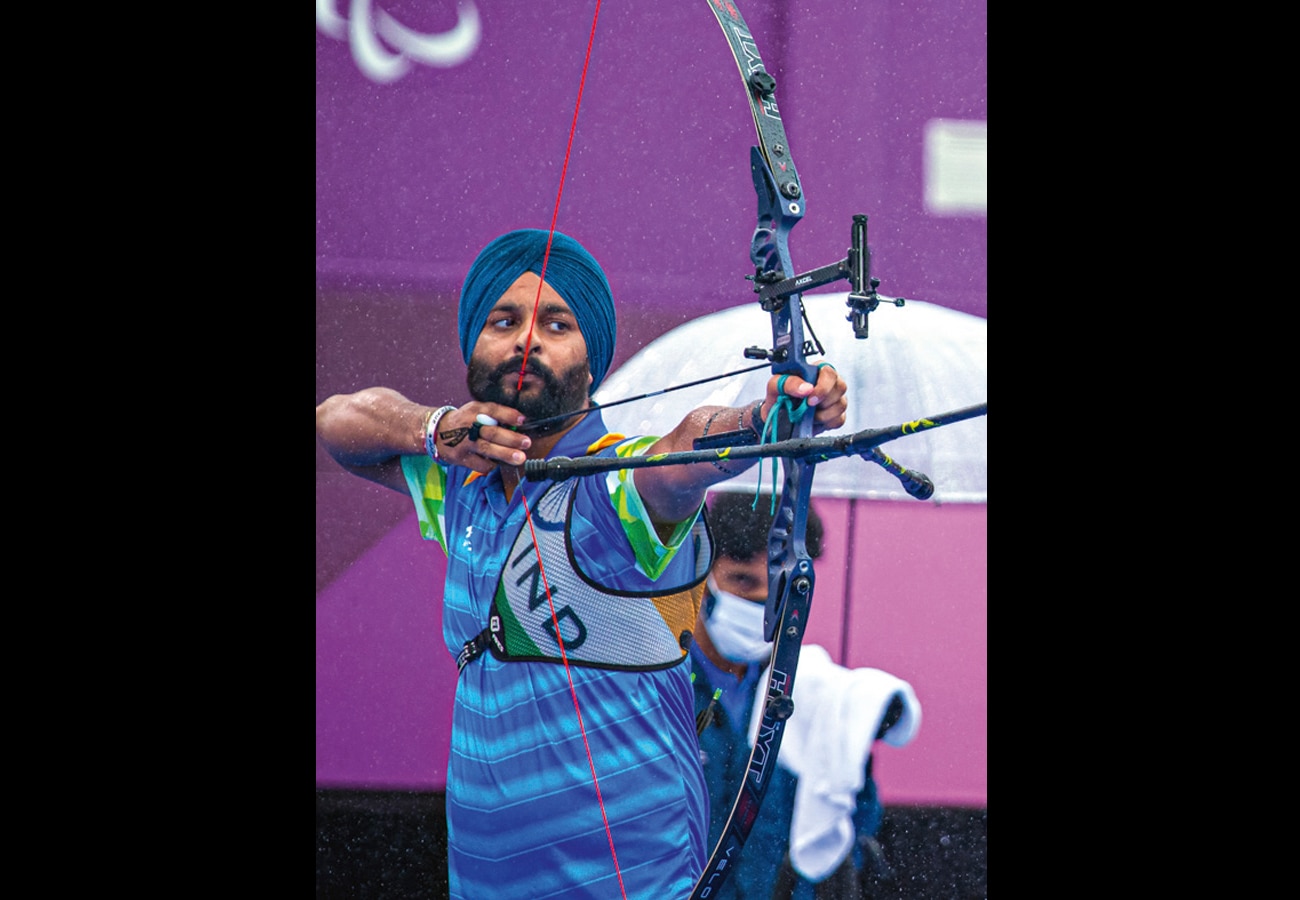 Not everyone, though, was lucky enough to have such acceptance or access to sports. Though he’d lost strength in his right leg as a result of improper medication, shuttler Manoj Sarkar hadn’t lost his will to play or his ambition to succeed. He remembers hounding his mother, Jamuna, for a badminton racket: “It was smaller than the normal size and cost just `10. But for my mother, who earned a living rolling bidis, it was no small amount. She borrowed money when I had to go to my first international tournament.”

Sarkar says that none of what he has achieved—most recently a bronze medal in the badminton SL3 category at the Tokyo Paralympics—would have been possible without his mother’s love and support.

For some para-athletes, sport isn’t just a distraction from despair, it is also a solution, the proverbial light at the end of the tunnel. When rifle shooter Avani Lekhara—India’s first female Paralympic gold medallist—was only 11, a car accident resulted in spinal injuries, paralyzing her from the waist down. “I used to love dancing. And just like that, I couldn’t walk anymore. It was a nightmare to wake up in a wheelchair. Today, of course, I have made peace with the fact that everything happens for a reason.” 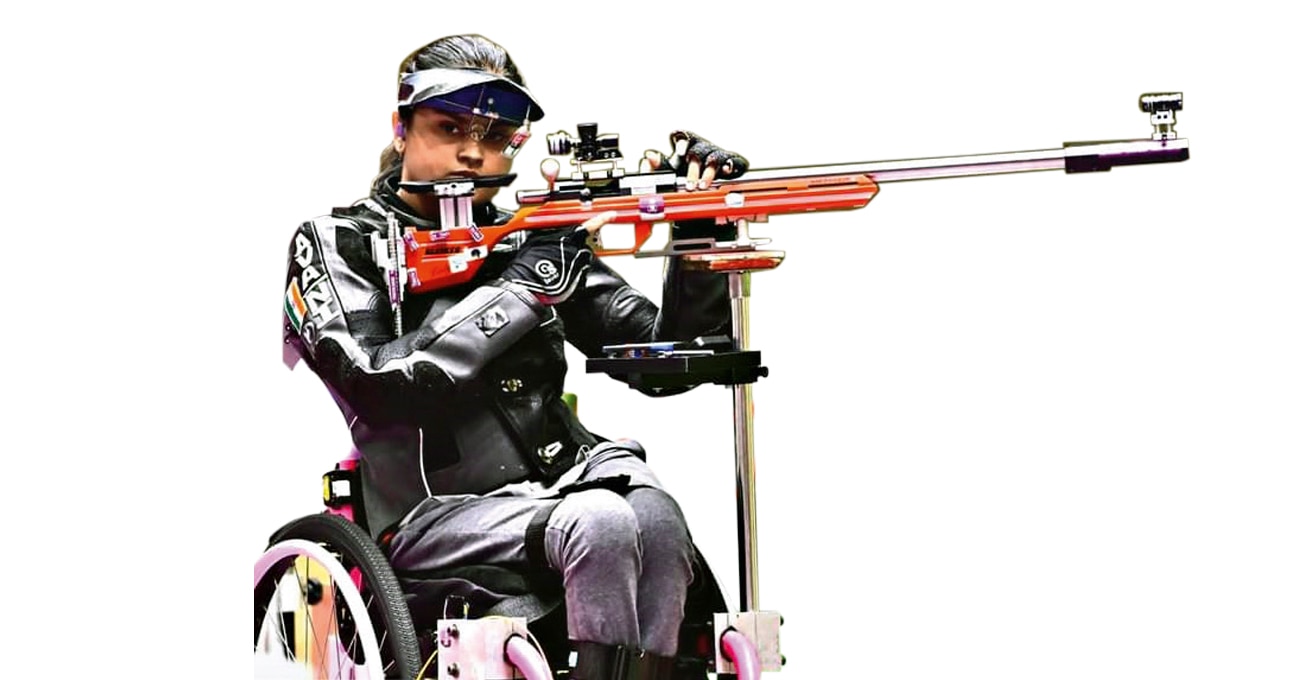 Three years after the accident, Lekhara visited a sports facility in Jaipur where she first tried her hand at archery. But it was, finally, at the shooting range that she made an instant connection with sport. “After I started shooting, I got better at studies as well. It taught me how to control my emotions and focus on the job at hand. Sport took priority after my first medal in 2015,” she recalls.

Since professional sport usually presents itself as an option only late, education often takes precedence for a lot of para-athletes. Always a bright student, Harvinder Singh grew up hoping to be an economics professor someday. It was during his time at Punjab University that he started to observe archers practising from a distance. Watching the sport on television during the 2012 London Olympics only intrigued him further. In no time, he started trying to balance both book and bow.

While most classmates would return to the hostel or head out to the movies, Singh would get dressed and set off for training. Rather than head home on the weekends, Singh now dedicated himself solely to his passion. At the start, Singh struggled to get used to the demands of archery, but under coach Jiwanjot Singh Teja, he adapted to a regimented training routine and grew the patience that the sport requires.

“I would never get exhausted mentally, since I was always eager to learn. Physically, though, it has been quite taxing. I had to work on building muscle to sustain long hours at training,” Singh says.

Yogesh Kathuniya’s life, too, has followed a similar trajectory. The discus throw silver medallist (F56 category) was seven when, suddenly, he had trouble walking or playing in a park next door. He thought it was a minor niggle, but in a few weeks, he was bound to a wheelchair after being diagnosed with Guillain-Barre syndrome, a rare neurological disorder. Stuck indoors, Kathuniya found solace in books. Wanting to become a chartered accountant, he began pursuing a BA in Commerce.When a senior at Kirori Mal College told him about para-sports, Kathuniya knew his burly physique would help in throwing events. But the early days were anything but easy. A few mocked him for the way he moved, while others bluntly told him he was never going to ace the sport. It only pushed him to train harder. He would sneak into Delhi’s Jawaharlal Nehru Stadium at night for a few extra throws. 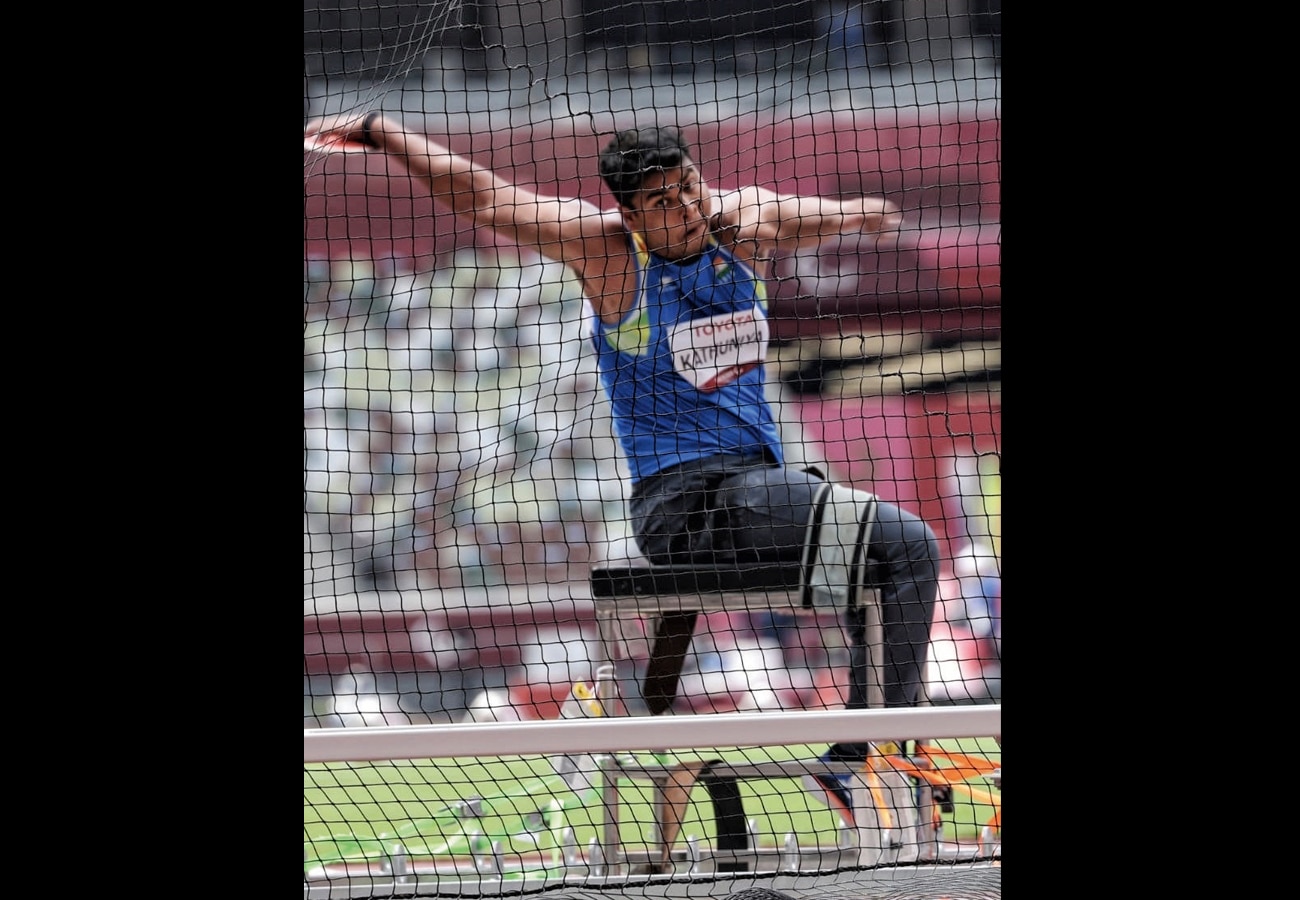 “During my younger days, I realized human behaviour is uncontrollable and I started ignoring everything that bothered me. But it was still hard to accept my disability and it wasn’t until I took to sports that my thought process changed,” Kathuniya says. In the early years, he says, he struggled to find a coach with the knowhow required to help him transition from a standing to a sitting position. He’d also borrowed money from friends to train. “But it was though sports that I again found myself.”

Pramod Bhagat, who picked up badminton gold in the SL3 category, grew up routinely dispatching older boys on the badminton court in Odisha’s Attabira, despite his polio-afflicted left leg. It was only later that learnt about para-competitions from his coach, S. P. Das. “I had no idea there was a separate category for those with disabilities, that people around the world were making a living off para-sports.”

This lack of awareness isn’t the only hurdle that many of today’s para-athletes have needed to cross. Up until the Rio Paralympics in 2016, they didn’t have the funding required to realize their dreams or their talent. “A lot of the funding used to go to able-bodied athletes, but few realized that our expenses were as much as their’s,” says Kathuniya. “It was really hard to manage things. After Rio, there was a big craze for para-sport. Things got better once we were included as part of TOPS (Target Olympic Podium Scheme). Support also came from organizations like the Olympic Gold Quest and Go Sports Foundation. Once financial conditions began improving, more athletes started to get serious.”

Added to monetary support, a partnership with dedicated coaches has helped para-athletes focus on their craft. In 2015, Harvinder Singh quit professional sport after he struggled with the compound archery discipline, but on the advice of coach Teja, he switched to the recurve event and picked the bow again. He then started training with Gaurav Sharma in 2017 and the results began to follow. The following year, he brought home his first international medal, an Asian Para-Games gold from Jakarta.

When COVID-19 struck last year, Singh took to the fields to train. Avani Lekhara created a makeshift 10-metre shooting range in her house. Kathuniya, meanwhile, connected with Sumit Antil—who won javelin gold (F64 category) in Tokyo—and shifted base to the latter’s home in Sonepat in Haryana.

“We share a great rapport and have been training together since 2018. With all Sports Authority of India (SAI) centres shut down during the pandemic, we made the most of a ground near his home. It was great motivation to have him around while training,” Kathuniya says. The duo shares a common coach in Naval Singh, who was away in New Delhi. They would record videos during training and send it back to Singh for analysis. “It was difficult but we knew the important thing was to keep our training going.”

For Sharad Kumar, the challenges were different. He had a lot to prove after a doping scandal landed him a two-year ban in 2012. He says he was wrongly penalized. With a point to prove to his detractors, he approached Ukrainian coach, Evgeny Nikitin, and shifted base to Kharkiv five years ago. However, the time spent away from home was not at all easy. “I had to deal with the language barrier, sub-zero temperatures and absolutely no entertainment—just train, eat, sleep and repeat. It was a tough time.”

Nikitin expected Kumar to stick around for just a few months, but once he realized his charge was committed to the work, he backed him wholeheartedly. “His greatest contribution is that he has made me very disciplined and a thorough professional. Besides, I credit him for saving my body,” says Kumar. 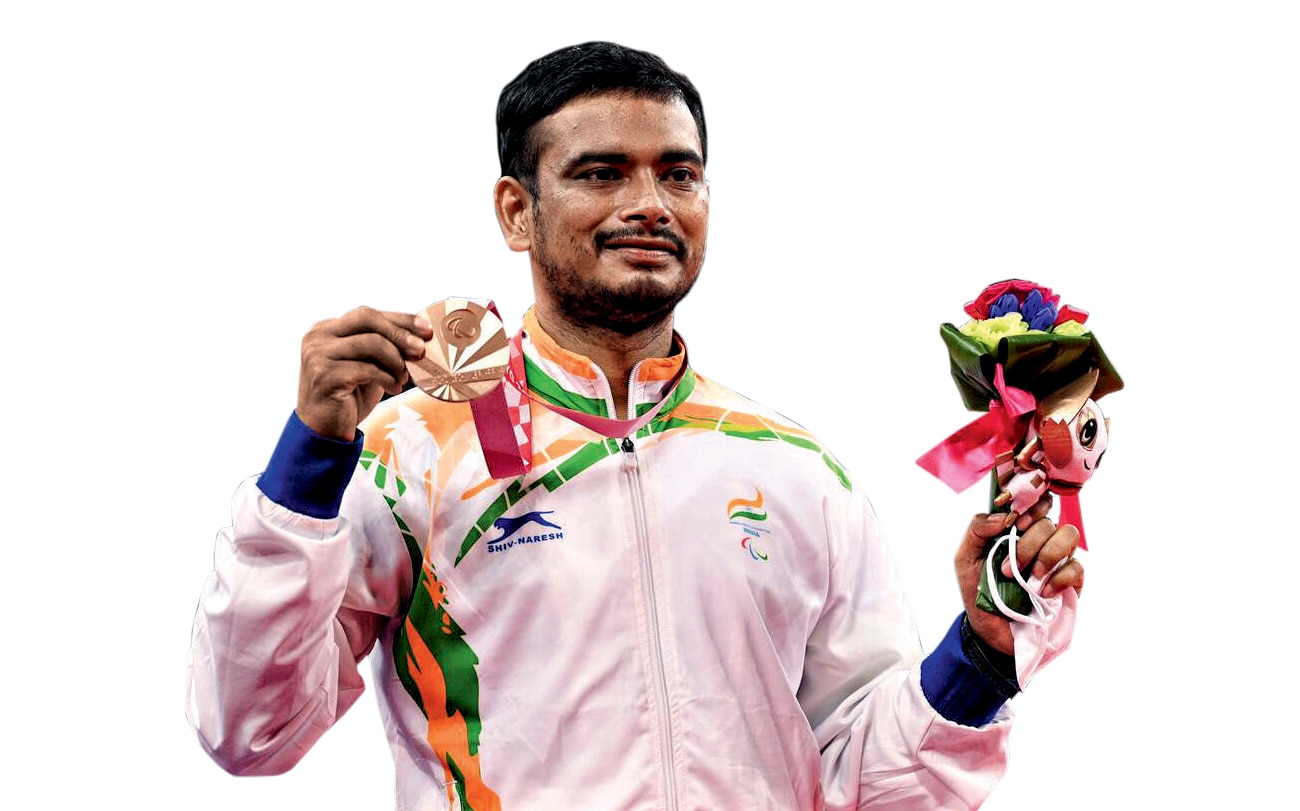 In Tokyo this year, each of these para-athletes stepped up to give their best—a record in multiple ways for India. Their feats of strength sparked raucous celebrations on their arrival back home. “I’ve since been gorging on rasmalai made by my mother,” Kathuniya says, laughing. There are goals that have been marked out for the months ahead, but for now, a few of them have decided to embrace routine.

Lekhara is back to her law books, hoping she can be a judge someday. Singh, on the other hand, is realizing his dream of teaching by addressing kids at the many felicitations he’s being asked to grace. The greatest satisfaction for Manoj Sarkar is to see the local stadium and his primary school in his native Uttarakhand town of Rudrapur named after him.

“A boy once asked me what it takes to win a medal at the Paralympics. I told him you need to love the sport so passionately, that it becomes your number one priority. I hope my wife does not get angry when she reads this,” he says, tongue firmly in cheek.