The magic of the arts -- how it can liberate and empower 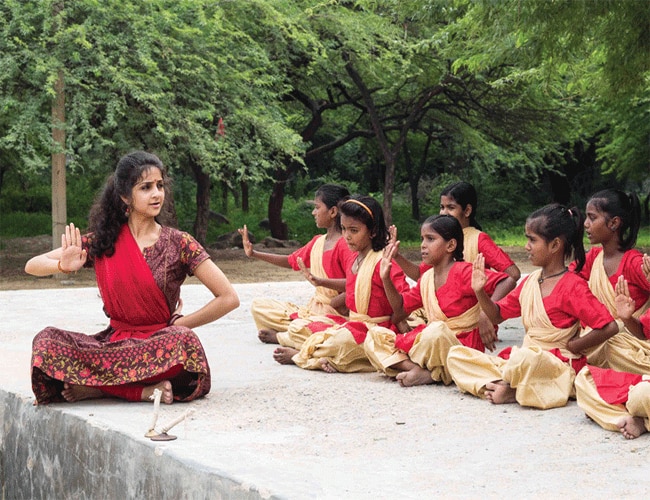 Nehha Bhatnagar, 30, found it hard to accept that a dance tradition as spiritual as Bharatanatyam would be limited to just a handful privileged enough to learn the classical art. After her training in Ganesa Natyalaya under gurus Saroja and Rama Vaidyanathan, earning degrees in international relations and political science from acclaimed institutions and touring the world performing for the who's who, this bothered her.

Could the spirituality of classical dance and the strength of international diplomacy be married? Was it possible to create an inclusive space for the performing arts, and eventually art education? The genesis of Sarvam Foundation was rooted in these questions. Nehha explains, "I was socially conscious and sensitive to the disparity around us. This led me to start teaching underprivileged girls the rudiments of Bharatanatyam." Lucky to be from a well-to-do family, she had what it took to succeed, in the conventional sense of the word. "I could have lapsed into a predictable career path. But a voice within urged me to share some of my luck with those who had none."

Sarvam -- 'all', 'together' or 'everyone' in Sanskrit -- was founded in 2012 with the purpose of bringing the classical arts to all, "from the girl child in the slum to the corporate executive in her glass tower. New artistes, new audiences, new technicians, new ideas -- open for all, accessible to all." What began initially as a platform to curate and promote senior artistes soon transformed and expanded to the Sarvam Plus programme, geared at teaching life skills to the underprivileged girl child through the classical dance forms of Bharatanatyam, Kathak and Kuchipudi. With the support of a small team of like-minded people, and the blessings of friends and family, Sarvam started its operations in the urban villages of Kishangarh and Rangpuri Pahari surrounding Vasant Kunj, New Delhi, where Nehha lives.

Currently 20 girls, between the ages 10 and 16, make up the group, but the impact of Sarvam can be measured not in numbers, but in the possibilities it has shown. The dance modules -- derived from mythological texts, a woman's strength, the masculine-feminine balance, to morality -- help the girls with "skill building, developing confidence and enthusiasm, firing their imagination, teaching hygiene, learning about nutrition, our heritage and discipline, exploring new avenues, and, of course, dance. We endeavour to instil self-worth".

The Sarvam girls come from the urban slums of Delhi, often from deprived, broken and abusive homes, and are in need of remedial education, which is provided by Nai Disha Educational and Cultural Society, a non-profit working in this space. During the week, after school, some of them proceed to the dance schools and some are taught by a mentor-teacher at a community centre. "On weekends all of us gather to do yoga, learn about hygiene, nutrition and bond. We involve the parents in their journey, counsel them and have them attend various performances where the girls participate," says Nehha. Some of the older students are now training girls in the lower-economic pockets of Delhi, through associations with NGOs like Katha.

Sarvam has participated in the Brave Festival in Wroclaw, Poland, for three consecutive years, on invitation, for a month, with four to five girl representatives 2015 onwards. Each year saw a different set of students tour the country with a mentor-teacher. This year they got to visit Slovakia as well. On such cultural exchanges the girls interact with children from countries across the world -- communicating and making significant connections through the language of their art.

Nehha recounts an incident from earlier this year, demonstrating the 'soft power' of cultural diplomacy: Driving through a Slovakian village, she noticed a group of children by the roadside … all sporting colourful bindis. Genuinely surprised, she got off to inquire. Turned out, her students had stopped by the village! There are tons of other such similarly uplifting anecdotes: "The boys from Uganda were performing Alarippu -- a basic piece of Bharatanatyam. We saw young boys and girls from Brazil and Russia to Moldova and Indonesia sit in vajra asana and padma asana, because of what they learnt from just sitting with my girls -- not in course of teaching, but just observing!" Nehha laughs. She calls the Sarvam children the young cultural ambassadors of India.

In the face of daily struggles for survival, with several mouths to feed and barely any opportunities, parents needed some persuasion. "But once the first group went abroad and the others followed, their academic performance improved significantly. Encouraged by this parents and the larger community came on board. The girls are mini-celebrities in their schools -- all competitions are won by them, they have passports, appear on national television, perform for international organizations and their calendar is almost as busy as mine!"

The dancer sisters Raveena (16), Kareena (14), Karishma (13) and Lakshmi (10) couldn't agree more. Raveena and Kareena learn Kathak, Karishma Kuchipudi and Lakshmi Bharatanatyam -- Raveena and Karishma were also the ones to tour Poland in 2016 and 2017 with Sarvam. Not only that, the sisters are musically gifted too -- over a phone call the dulcet voice of Karishma broke into a Polish song she had picked up on her travels. Between juggling schoolwork and rehearsals, the girls have their hands full.

The future looks bright for the Sarvam girls. As for Nehha, taking small but assured steps, she hopes to be able to support 100 marginalized girls by 2020 through the foundation she set up, and expand activities to other parts of the country. "I believe that the arts should keep one bound by culture but shackle-free. There is a dire need in today's world for empathy, love and other such intangible miracles -- that ancient traditions can address and through it, heal. I want this healing to be accessible to all."