Courage Under Fire: How 53-Year-Old Mohinder Singh Turned Saviour During The Delhi Riots

Mohinder Singh and Inderjeet Singh made at least 20 trips each on their bikes transporting around 60 people on the evening of 24 February. They braved stones, negotiated blocked roads and escaped mobs looking out for targets, to carry their terrified neighbours to safety 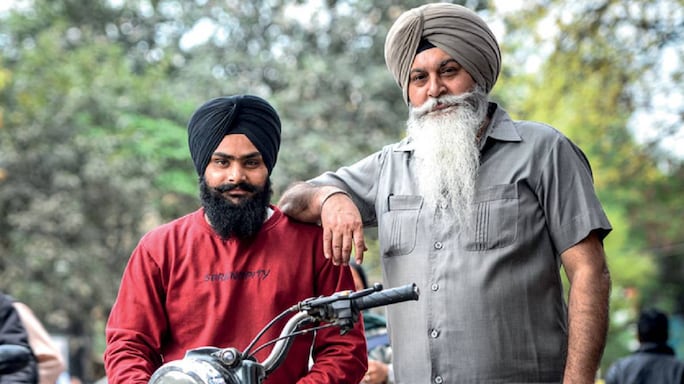 Having received love and protection during the anti-Sikh violence of 1984, Mohinder Singh (right) and his son Inderjeet paid it forward during the Delhi riots. (Photo: Rajwant Rawat)

Mohinder Singh is a gentle giant. At a little over six feet, he bends over while twirling his moustache and stroking his white flowing beard, and speaks softly. If it wasn’t for his ceremonial dagger, he is more Santa Claus than Sikh warrior. This 53-year-old man single-handedly saved scores of people from the marauding mobs during the communal violence in Delhi.

“In Gokulpuri, where we have always lived in harmony, we have never seen such riots since 1984,” says Singh, manning his shop counter, where he sells cheap electronic items, in the riot-hit suburb of north-east Delhi.

This Hindu-majority area has signs of carnage writ large all over it: burnt houses and shops and a masjid covered in a maze of electric wires. Two shops away from Singh’s is a watch store belonging to a Muslim trader that was looted. The vacant, upturned shelves capture the horrors of that day.

It all started on the evening of 24 February when rioters in masks and helmets started targeting the violence spilled over to other houses along the lane, later.

“After the police chased away the first wave of rioters, many Muslim families wanted to get out of the area,” recalls Singh, who called in his 26-year-old son Inderjeet and got to work. “We decided to evacuate as many people as we could,” he says.Their destination was to be Kardam Puri Chowk, a little over a kilometre south-east of Gokulpuri. Meanwhile, Singh’s wife, Mandeep Kaur, provided shelter to several women and children in their home.

“We first started ferrying the children, sometimes three pillion riders at a time, on our two-wheelers,” Inderjeet says. They feared some people would be profiled and “recognized” by the bloodthirsty mobs: Mohammed Hamza, 24, a post-graduate student, whose house was set on fire, was among them. “Since I have a beard, a maroon turban was tied around my head, as Inderjeet rode me to safety. It’s amazing how many lives they saved on that day,” Hamza says.

The father-son duo made at least 20 trips each on their bikes transporting around 60 people that evening. They braved stones, negotiated blocked roads and escaped mobs looking out for targets, to carry their terrified neighbours to safety.

“We just wanted to save everyone,” Singh says. Once the media spoke to the rescued families, the Singhs became local heroes overnight. But very few realized, at first, they were also paying it forward. In the aftermath of Indira Gandhi’s assassination in 1984, thousands of Sikhs lost their lives and lakhs their livelihoods. Singh and his family emerged unscathed, protected,as they were, by their Hindu neighbours.“We lived in a neighbour’s home for three days and many stood guard infront of our house. Their brotherhood and empathy saved us, it was my turn this time,” the senior Singh says.

Mohinder Singh is now a much most sought-after person. As we speak, a Member of Parliament from Amritsar, Gurjeet Singh Aujla, comes calling to felicitate him. Singh will soon be off to Pune where he is being honoured by an NGO. There are many more invitations from other parts of the country that he must respond to.

Recognition, however, was far from his mind at the time—he simply followed his conscience, even if it meant putting his life on the line. But not everyone praises his efforts. “I am being targeted for what I have done. I hear some people are cross. ‘The Sardar shouldn’t have done this,’ they say. Look, I just did my duty and I only fear God,” he quips matter-of-factly.

Singh has his next job cut out for him. “The displaced families must return home. We need to form committees and bring back peace to our area,” he says. If there’s one person who can do it, it’s him.