Courage Under Fire: Dr M. A. Anwar And Al Hind Hospital Heal Mustafabad In The Aftermath Of The Delhi Riots

While Mustafabad heals, Al Hind Hospital is now a sanctuary—over 50 people, left homeless by the politics of hate, are housed there 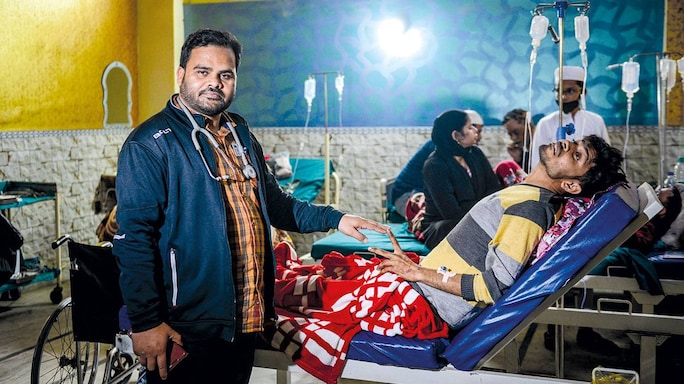 24 February 2020 was a busy day at Al Hind Hospital at Delhi’s Old Mustafabad. This three-storied hospital, in a Muslim-dominated neighbourhood, found itself in the eye of a communal storm, and its founding doctor—40-year-old M. A. Anwar, a migrant from Bihar—thrust into the foreground.

“Patients started coming in from 2:30–3 a.m. The facility is small; we didn’t have the infrastructure, but became the only refuge for those who needed medical help,” Anwar says.

Through the next few days of communal fire, nearly 600 patients streamed in, turning the first floor into a makeshift emergency ward. Mattresses and sheets were requisitioned, ropes were strung across the room to hang drip feeds. Alarmingly, many of the injuries Anwar treated were from bullets and pellets; some were worse. “Every wound I witnessed wasn’t just trauma—it was plain savagery. They spread a man’s legs until his groin split in half.”

“There were attacks everywhere. All the entry points into Mustafabad were barricaded,” he continues. “We tried to call ambulances but the Centralized Accident Trauma Services, meant for this very purpose, flatly refused.” The police were no better. “We had wheeled out a patient with a severe head injury on a stretcher, and others with pellet injuries, about a quarter of a kilometre from here.” When an ambulance organized by some of Anwar’s doctor friends reached, the police refused entry. “They said, ‘Our constable was killed, so how does it matter if eight or 10 of yours also die’. Kids with pellet injuries were beaten up mercilessly by men in uniform.”

Handicapped by institutional failure, Anwar found himself doubting his ability to help. But, he found his resolve soon, “I decided, we will try our best. For the rest, kudrat [nature] will take its course.”

His faith paid off. Justice S. Muralidhar of the Delhi High Court was to hear a plea on 25 February on allowing safe passage to the wounded from Al Hind Hospital to Guru Teg Bahadur Hospital, which was better equipped to treat these severe injuries. Advocate Suroor Mander arranged for Anwar to testify on the desperate situation at the hospital. “The honourable judge—simply doing his duty, listening to those affected—saved us.”

Doing one’s duty—and doing it well—is exactly what sets Anwar apart too. Not abandoning his station, even when he had the opportunity to, speaks volumes of his commitment to his profession. “It is during times of trouble that a doctor is needed. I didn’t have the time to think it through, but had I fled that day with my family, I would have lived with the regret that I didn’t do my duty. I have just done my job.”

Witnessing this scale of violence could shake anyone’s faith inhumanity but Anwar disagrees: “We all have our conscience. It’s been suppressed to an extent in some; sometimes it feels like it has taken leave of others. But everyone has a sense of what is right. And everyone knows what happened was wrong,even if they don’t have the courage to speak up.”

While Mustafabad heals, Al Hind Hospital is now a sanctuary—over 50 people, left homeless by the politics of hate, are housed there. “We are trying to rehabilitate them. Give them rent and rations for a couple of months; most of them had low-income jobs, so we are also trying to find them work. Currently, we are building a database of those who want to help and those in need—to bring them together.”

Anwar moved to Delhi almost 18 years ago from Bihar’s Champaran district. After he decided to pursue a career in medicine, his mother would tell him, that once he became a doctor, he shouldn’t charge fees. “I think, now, I have kept her word,” he laughs.