Courage Under Fire: Premkant Baghel Saved People From A Burning Building During The Delhi Riots

The young hero’s life hung in the balance, as police remained absent despite multiple calls. Even ambulances refused to enter the area. But young Baghel’s faith in humanity is undiminished 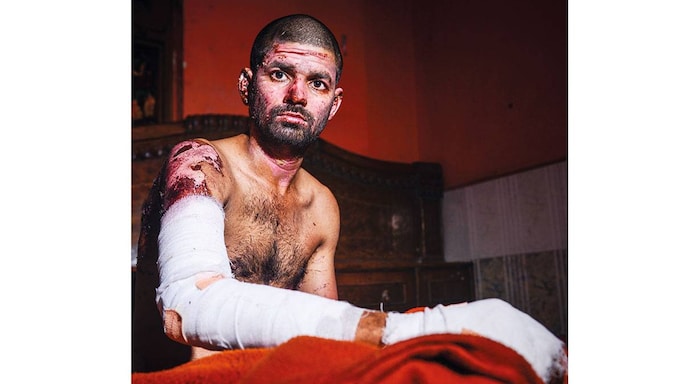 Premkant Bagel sustained burns on 70 per cent of his body trying to save seven people from a burning building (Photo: Rajwant Rawat)

When 25-year-old Premkant Baghel woke up on the morning of 26 February, he found himself in a stranger’s home. His mind was blank. All he could register was the pain—pulsating, intense, everywhere. Terrible scenes from the previous night came back in flashes—a frenzied mob; screaming innocents caught in a tornado of hate; a house set ablaze; the inferno from which panicked, desperate voices shouted for aid; the blast that turned everything black.

Baghel is single, semi-literate and apolitical. Like others living in this mixed community, he tries to make an honest living and stay out of trouble. But on 25 February, trouble found him and the hapless residents who were attacked by communal rioters, pelting rocks and hateful chants.

By the time Baghel, a pickup truck driver, reached his brother’s house in Shiv Vihar, it was 9:30 p.m. and pandemonium had ensued. “We were inside the house and heard a commotion—the mob had set fire to a building. I knew Premkant had arrived, but he never came up,” says 39-year-old Vijay Pal, Baghel’s oldest brother, looking over at his injured sibling. Lying in bed, Baghel stares at the wall, his eyes dull with pain and his breathing shallow. A blanket half covers his arms, wrapped in bandages from shoulder to palm. Newly formed skin from areas badly burnt—shine on his shoulders, face and neck. “I heard people shouting inside the burning house and ran over. Breaking open the metal gate with a rock, I pulled six or seven people out,” says Baghel. “Then there was an explosion—a gas cylinder had blown up, I learnt later—and I passed out.”

“We knew nothing until a neighbour, who found Premkant unconscious and took him home, called us in the morning.They put toothpaste on his burns and kept him safe,” says Vijay Pal.

For the next few hours, the young hero’s life hung in the balance, as police remained absent despite multiple calls. Even ambulances refused to enter the area. But young Baghel’s faith in humanity is undiminished. “I don’t understand what violence achieves. Hindus and Muslims should try to live together and work in peace.” From his lips to God’s ears.