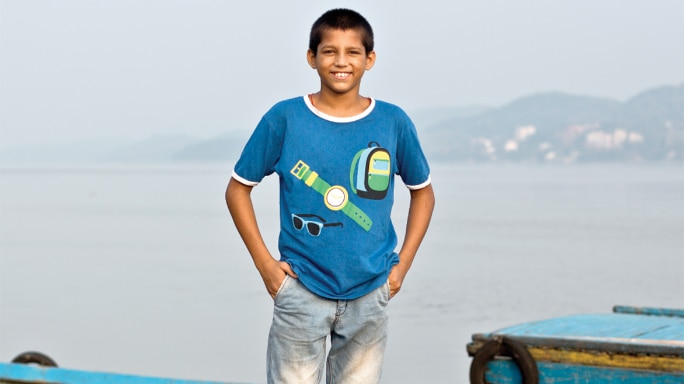 Every monsoon, rains flood Assam with unfailing regularity, claiming loved ones, homes and livelihoods. This year was no exception. Heavy showers throughout India’s north-east regions caused the Brahmaputra to swell, leaving chaos in its wake.

On 5 September 2018, at around 1 p.m., 11-year-old Kamal Krishna Das stood patiently with his mother, Jitumoni Das and aunt, Meenakshi Das, on a ferry crossing the river. His grandmother was on her way to a pilgrimage and they had gone to south Guwahati to see her off. They were now headed home, located on the northern bank of the river, with little idea that their journey was about to turn into a terrifying misadventure.

The ferry---carrying 28 people---was unusually slow that day. Still, passengers did not give it much thought, until they noticed the smoke. Terrified, they raised an alarm, but the operators assured them that everyone was safe. Mildly reassured, everyone fell back as the ferry moved on. Halfway through the trip, the boat suddenly stopped. The operators still insisted that there was nothing to worry about: It was simply a case of trash jamming the engine. The passengers, already agitated by the smoke, felt fear setting in, and with the mounting panic, came anger.

People began hurling abuse at the ferry operators, while others made frantic calls to loved ones. Kamal’s mum phoned his dad, and after a few words, handed it over to Kamal. By then, the smoke from the engine had returned in thick, black clouds---the inky fumes blanketing the boat. The engine spluttered out and the vessel was now at the mercy of the river, tossed about by its powerful current like a toy. The distraught passengers started hailing a ferry boat floating past, but it continued steadily, ignoring their cries for help. Perhaps they feared that any attempt at a rescue would endanger the people on both boats.

As the ferry was pushed forward by the current, quite out of control, it became clear that they were headed straight for a seven-foot-wide pillar that was part of a water-supply structure. With no engine, the ferry had no means of changing course. They were going to capsize---it seemed inevitable. With disaster imminent, a few men among the passengers climbed on to their motorcycles, and began jumping off the boat to try and cling to nearby structures before they crashed. But before they knew it, the ferry collided against the pillar with a sickening crunch, turning over and plunging all 28 souls overboard.

Caught in the midst of the furious river, Kamal’s mother first thought of her child’s safety. Fearing for his life, she yelled out, urging him to swim ashore. Disoriented and scared, Kamal heard his mother’s voice and did as she asked. “I knew he would be able to save himself since he swims in the Brahmaputra … twice a week,” Jitumoni would tell The Times of India much later. Thrashing his way towards the bank as hard as he could, Kamal, almost at the edge, turned to look back. That’s when he realized that his mother and aunt had not followed him. He remembered---his mother could not swim.

Kamal swerved back towards the crash site to reach his mum. “I was terrified that my mother would drown; my pehi [paternal aunt], I knew, can swim a bit,” he said. The violent, swirling river didn’t make it easy. “I didn’t see Ma at first. The currents were very strong, but I was able to grab her hand. I knew that she was wearing a broken bangle and that’s how I was able to spot her hand,” Kamal explained. Struggling in the water, Jitumoni was delirious. Speaking to Reader’s Digest, she said, “I wasn’t in my full senses. I didn’t realize that it was Kamal who had grabbed me and pulled me to the pillar. I remember feeling grateful, but it was only later that it struck me that it was my son who had saved me.” Kamal with his mother Jitumoni (right) and aunt Meenakshi (left)

Slowly, Kamal got his mother out of harm’s way, but he knew there was no time to rest. Diving back in, he fought against the current towards his aunt. “I had put Ma near the pillar, but I could see pehi struggling against the current, so I dived back in, grabbed her hand and pulled her to safety.”

With his mother and aunt now out of danger, Kamal could finally rest. As he took deep, gulping breaths to calm his racing heart, he looked towards the river, frothing and roiling powerfully, and noticed something strange. In an instant, he made sense of the dipping shapes---a woman cradling her baby was floundering in the water. Kamal recognized them as fellow passengers on the ferry. The child was too small to swim and the mother was struggling to stay afloat.

Limbs weakened from fighting the current twice over, Kamal jumped into the water again, using every last bit of willpower to reach the desperate woman. “By the time I got there, the woman and her child were separated. I managed to grab her hand, but she pulled away, yelling that her baby would be swept away. It happened before I could do anything.” Kamrup’s deputy commissioner, Kamal Kumar Baishya confirmed that, luckily, the mother was able to grab her child with her dupatta and eventually reach the pillar. Soon, three boats arrived to rescue the stranded passengers.

Swimming since he was three years old, Kamal dreams of becoming a swimmer at the national level. With his father as his coach, he aims to one day swim across the Brahmaputra. Speaking about the harrowing experience, he said, “The currents were very strong that day but I was not scared. When I spoke to deuta [father] over the phone, he told me that if something bad happened, “keep swimming as fast as you can and help your mother and aunt; if possible help others too”. His words bolstered my courage.” Brimming with pride and love for her brave boy, Kamal’s mum simply said, “I owe him my life.”

Do You Like This Story?
14
2
Other Stories
Please enter valid text
corona updates
Must Reads
Latest Issue