A glimpse into a transwoman’s resilient life, both synchronously coveted and singled out I often think about the way plants grow. Not all stretch upwards, tall and straight. Some instead curve, diverge, turn as necessary, reaching out for the space and light it needs to survive and bloom. As a child, I knew I was different from others, but had little inkling about how that difference would mark me out.

I was born in Uttarakhand in July 1971. Soon after, my father got a job in Punjab University, and we moved to Chandigarh. My parents named me Dhananjay. I was three when I first told my mum that I wanted to join in on a kitchen chore. I would watch fascinated as she kneaded dough to make rotis for our daily meals. My request however met with a dismissive wave and resistance—perhaps because I was a little child and would hassle more than help; partly because in my home, like in most Indian homes, a boy has no place in the kitchen.

That night, once everyone fell asleep, I tip-toed into the kitchen. The light was out of my reach, but, scrambling in the dark, reached into the large, heavy container where flour was stored, put some into a vessel, poured in water and stuck my fingers into the soupy mess. I had no idea what I was doing, but mimicked what I saw my mother do every day. It was thrilling. The sound of my tiny hands, slapping against the wet, unset dough woke her up. Worried that a cat had strayed in, she looked in to check, and found her eldest boy flour-soaked, playing house.

When I turned five, it was time for my mundan ceremony—a Hindu coming-of-age ritual where they shave a child’s head. This purification ritual is supposed to rid a child of negativity from his past life, and put him on the right path to development in this life. Girls in my family were excused this ritual baldness. I was inconsolable and kept screaming that I was a girl and should be spared. I lost that fight but won a different battle—they let me wear a frock at the ceremony. My childhood was full of such subtle negotiations with adults in my world, a constant back and forth between what I desired and what I was allowed.

It is hard to articulate the dissonance between my assigned sex at birth and how I felt as a person. I couldn’t explain it and even if I tried, I am not certain you would completely understand. If you were asked exactly how long it took you to grow your hair out, you wouldn’t be able to point to a precise timeline. Gender is somewhat similar—rarely a cataclysmic event that can serve as identifier of when you started to express who you are.

Gender is socially constructed. Children are taught what it means to be male or female and which pronoun goes with what body—constructed and ordered in binaries. They learn that a boy is this way, and girls cannot do that, and that is all there ever was, is or even should be.

I was seven, when I told my mother I was a woman. I was quickly carted off to a pandit, who assured my parents that a witch had possessed me; nothing a quick exorcism couldn’t fix. Hot tongs were taken to my body, lashes repeatedly inflicted to beat the spirit away, until finally, cowering in pain, I spoke the words that made them feel better—I’m a boy. I understood that it wasn’t okay, or safe for me to tell others that I, a boy felt like a woman. I began to try and present more masculine but I was deeply unhappy.

Soon, puberty struck and my body started to betray me. The tufts of hair on my face, made no sense. How could this be happening? I’m female. But women’s bodies looked different from mine. The memory of the hot tongs, the beatings and the fear joined forces and developed a voice. It told me that what I was knew and felt deep down—I am woman—was a lie, a betrayal.

But truth, I found, is stronger than doubt. No argument or force can withstand its power. Every nerve in my body wanted to be female. The ‘real’ world demanded that I look and act like a man, but my reality was that of a woman. School became harder: isolation, bullying, homophobic abuse and eventually sexual assault—first by a schoolmate and afterwards a middle-aged neighbour—marked my academic years. By the time I turned 12, it became clear that I had to hide who I was from the world, and often those who saw my truth were not my friends.

Small pockets of joy carried me through the miasma. Performing as female characters in neighbourhood skits during Ramlila celebrations, made my heart sing. For once, I could dress-up and put on make-up without censure, without being singled out. But even these spaces weren’t safe. 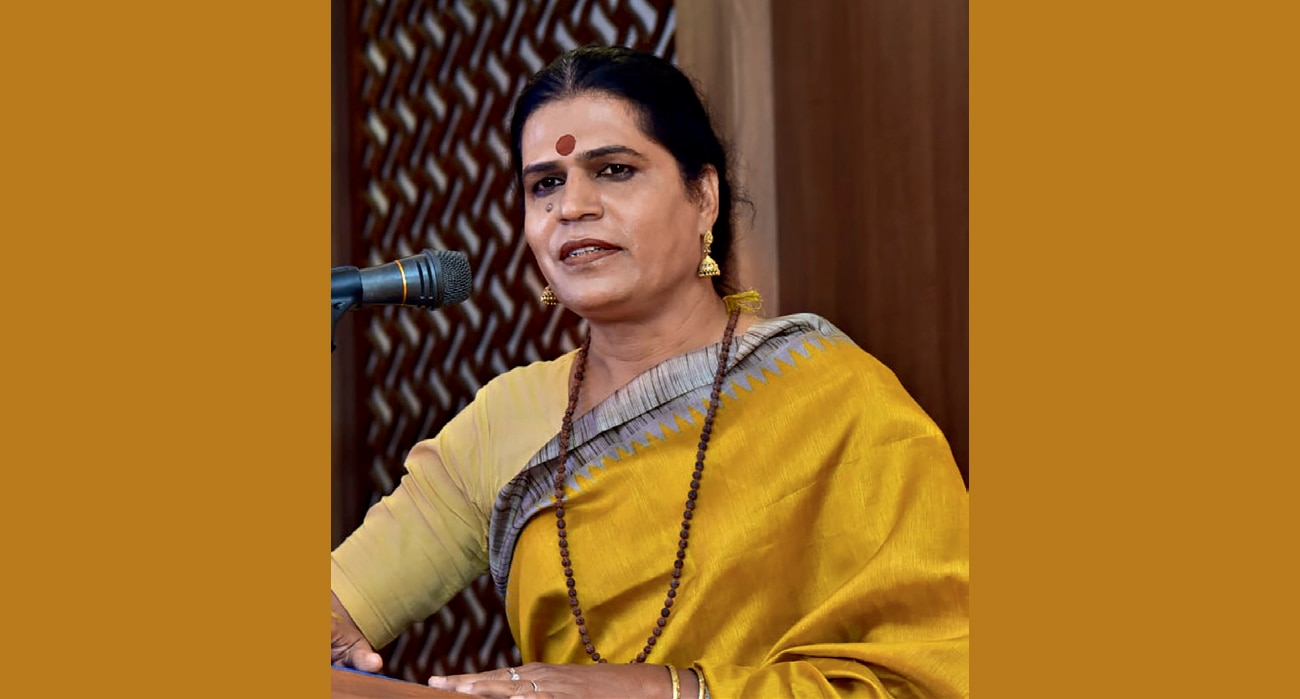 Predators, armed with the ability to sniff out weakness, picked up on my vulnerability, my fear of discovery, knowing full well that the way I carried myself—‘like a girl’—meant I was fair game and without help or support. Whenever I gathered the courage to fight back, they would threaten me with violence and blackmail. My family didn’t understand what it meant for me to be living in a body that was not my own or the traumas I had to undergo because of it. I wanted to escape. A few years later, I did. I cycled all the way to Kurukshetra, only to realize I had nowhere to go.

Education, I decided, would be my ticket out. In 1993, I topped Panjab University in my course. I started pursing multiple diplomas, learning different languages—Russian, French, computer science courses. Keeping myself gainfully occupied helped me with my mental health. Learning kept me from completely sinking into an abyss. I had found a few friends from the LGBTQI community, and their company saw me through those days. With them I didn’t have to control and police how I spoke or how my body moved. I could drop my guard and just be me.

Now an adult, I enjoyed safety among friends, but danger was never far away. One day my group and I attended a carnival, the sort that shopping malls often organize. There was music and dancing and we joined in the revelry. A little after 9 p.m., I was headed home when a man walked up to me and struck up a conversation. He had a kind manner and we chatted for a while. It was late, so he offered to give me a ride, maybe drive around the city a bit before taking me home. His friend would bring the car around. I turned him down several times but he insisted.

Once his friend arrived, he held my hand and shoved me into the car, pulled out a gun and threatened to pull the trigger if I made noise. They drove me to a hostel in Ambala, where 20 men took turns violating me through the night. Trembling, bleeding, devastated, I was driven to the bus station and left there at three or four a.m.

After what felt like ages, a half-empty and dimly lit bus stopped and I clambered on to a seat in the back. The conductor appeared after a while and sat next to me, asking for my ticket. I told him I had no money. I don’t know what it was exactly, but he knew it too—I wasn’t a straight man. He grabbed my hand and placed it on his privates—the price I would have to pay to get home.

When the bus reached Chandigarh, I dragged myself to the police station to file a report. Skeptical, the cops took me to a room and began questioning me. They asked me to remove my clothes to show them where I had been touched. Feeling helpless and terrified of further assault, I decided I didn’t want to register a report and walked out.

No one wanted to acknowledge my trans-femininity, unless it was to punish both the man I looked like on the outside and the woman I was on the inside. I felt destroyed, attacked at every level. It felt like people forgot their humanity as soon as they encountered me. No one ever listened to people like us; we had no protection. A lifetime of trauma and pain came simultaneously hurtling to the fore. This was no way to live—like a gaping wound. Thoughts of ending it all swirled in my head.

But as I turned that thought over and over in my head, I felt a surge of anger: Why should I destroy myself? Why did I have to hide who I was? What was my crime? Being stuck inside a body I was born with, that was never my own? For once I would let ‘her’ live instead of hiding her away. No one would be allowed to hold my true identity over my head like a weapon, using it to abuse me, hurt me or diminish me again.

I poured myself into activism and reached out to people in the LGBTQI community. Initially it was hard: a lot of trans-people are disillusioned, paralysed by the overwhelming barriers and hatred we’ve faced, but cowering away was no longer an option. I started building networks in the community. In 2009 I started an NGO called Saksham Trust. We started collaborating and learning from our work with other LGBTQI organizations.

In 2012, I joined a national level consultancy where transgender activists across India got together to file a public interest litigation together with the National Legal Services Authority (NALSA). After the 2014 NALSA judgement recognized the transgender community as the third gender, I became the first transgender person to join Panjab University in 2015. I went to the university admissions dressed in women’s jeans and a kurta. It was the first time that I looked into the mirror before I stepped out of my home, and I wasn’t scared of what reflected back at me. At the age of 44, I had finally allowed the woman in me to live, I was going to see what she was capable of.

I have been fortunate to be able to be part of various progressive steps and victories for the transgender community. I was at the forefront of organizing the first Chandigarh Pride parade, campaigned to get the state government to institute a transgender welfare board, and now serve as one of two transgender members of the 14-member panel.

After I joined Panjab University, I campaigned for separate transgender bathrooms, for instituting an anti-discrimination cell on campus and providing transgenders with free tuition. From being oppressed and stuck in a cycle of violence, waiting for hours outside institutions to hear me out, I now get invited to conferences, schools and colleges and even police academies across the country to speak and deliver sensitization programmes.

To those struggling with their gender identity, I want to say: Own your story, embrace your identity, educate yourself and engage. Choose life as an act of resistance. It took time, but I have learnt to accept myself. It is my body, and only I am allowed to make rules for it, choose what makes me comfortable in my skin and happy in my being.

After years of seeking ways to disguise my true self, I have made the decision to medically transition. In a few months, I will present as unambiguously female and bring my body finally in sync with my mind. Soon, I will be able to live as a resilient 50-year-old woman, who was born a male.