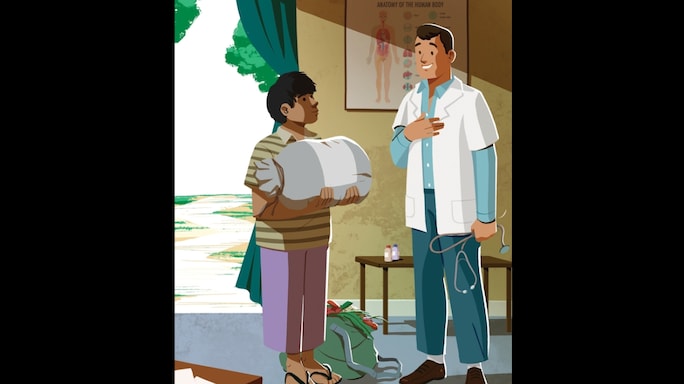 In 1996, I was a 23-year-old surgery student at Srirama Chandra Bhanja Medical College in Cuttack, Odisha.Being a doctor was my dream. Each time I wore my crisp, white doctor’s coat, I felt exhilarated. I had a spring in my step while walking the halls of this prestigious institution, trailing behind the senior physicians treating people in real time, not through simulations as we’d been doing so far.

Like many medical students in training, I was assigned the graveyard shift. I was part of an eight-member general-surgery team and enjoy interacting with patients. The fact that I spoke multiple languages gave me an edge too. One hot summer’s day, I was on duty along with one other colleague. It was a quiet, uneventful stint, until around one a.m. that night.A tall, well-built, middle-aged man came in on a stretcher in severe pain.His large frame was doubled over, his hands clenching his stomach to try to contain his agony. We got to work.

Banudhar, the patient, complained of progressive pain in his stomach which was abnormally swollen, a symptom building up over the past four hours. Despite some relief from the painkillers and intravenous fluids provided by the ER team, his continuous discomfort was clear. I suspected an inguinal hernia—a condition that could not have been a sudden occurrence. It had been troubling him for months,but he had ignored the symptoms, carrying on with his work as a rickshaw-puller to feed his family.He attributed the increased pain to“heavier customers”, as he was required to pull more weight. But that night, he just could not carry on.

An acquaintance had driven himto the hospital, but could not stay.Banudhar was alone and terrified. He asked me if his condition was serious,his eyes wide with worry. I fumbled my words, stricken by inexperience and emotion. Should I be honest?There was no family member with whom I could discuss these matters.Would honesty distress him further?Would showing sympathy affect my ability to perform my duties? More importantly, how could he be expected to make rational, critical decisions in his state? There must be someone to be here for him, I thought, and did my best to contact his loved ones.

Banudhar, his wife and son, were landless labourers and lived in village five hours away from Cuttack. To call someone in those days, one had to find an STD or long-distance call booth. I rushed to one across the road from the ER. The village had fewer than a handful of phones. The first three calls did not go through. A few more went unanswered. By then, it was almost dawn and my hope was fading. Finally, a man answered and assured me he would call back after getting hold of Banudhar’s wife. Twenty-five minutes later she called and I was able to let her know that he needed emergency surgery. She burst into tears and said she would try to get there as soon as she could.Meanwhile, Banudhar’s CT scan confirmed that he had a strangulated inguinal hernia and that sepsis had set in. We raced against time, rallying our team of anesthetists and senior registrars for an urgent laparotomy.

An emergency surgery comes with peculiar challenges, with each difficulty magnified in government hospitals plagued by a dearth of resources and staff. We also had to take Banudhar’s thumb impressions on consent forms and decisions needed to be made at the operating table. I still remember his words just before he went under: a whispered prayer to his village deity. When Banudhar awoke from surgery two hours later, I was by his side. He clutched my hand and fell back to sleep.

It took a few days for his wife Gitanjali* to make it to the hospital. I led her to her husband—frail, hooked to an IV, with drains attached to his belly, but alive—and she wept with relief and worry. Meanwhile, Banudhar was being closely monitored. With a nurse by my side, I would supervise the dressing of his wounds, drain outputs et al. During these visits, Banudharbegan to open up to me. He told me his family worked on a small plot of land where they grew paddy, that the village priest regularly appeased the rain gods, that Odisha had hundreds of varieties of rice. Banudhar clearly missed his days on the farm. Working as a rickshaw puller was a gruelling job but he had moved to the city so their teenage son could soon join him for a better education. 18 days later, he was discharged. He had a few follow-ups but these did not coincide with my shifts. I did not get a chance to meet him again.

Months later, I was in my hostel room attached to the hospital. A guard knocked fervently at my door, saying someone was there to see me. I went down to find a teenage boy dragging a heavy sack. He introduced himself as Prahlad*. I knew him even before he introduced himself—he was the spitting image of Banudhar. Prahlad awkwardly handed me the bag, with a muttered apology for not bringing anything more, and quickly scurried off, saying he had a bus to catch. I did not want to accept gifts and chased after him for some distance, the sack slowing me down, but he would not have it any other way.

Eventually I gave in and scanned its contents. Inside was some rice, a handful of potatoes and a few onions and leafy vegetables. Banudhar’s stories about his small farm, his dreams for his boy, flit-ted into my mind, and I felt deeply the preciousness of this humble, but precious gift from this wonderful family.

Over the next few years, I pursued a specialization in urology, moving across India. I witnessed how lasers and state-of-the-art robots had transformed the world of surgery.While medicine has evolved, can we say the same for doctor–patient relationships? I once read about an assault on a healthcare worker by a patient's family in Mumbai. I also read of medical negligence cases that had devastating consequences for ordinary people.

Just as these thoughts were runningthrough my head, the phone rang. Thevoice seemed vaguely familiar, as did the Oriya dialect: Prahlad was on the line. He had tracked me down two decades after we last met. Banudhar had retired, and was finally living the village life. The family was anxious about my well-being, as COVID-19 had claimed many healthcare workers.

The conversation was brief, and yet, so much was conveyed. If gratitude and love were packed in the sack of rice 26 years ago, there was also a bond for life.How could I ever forget Banudhar? In my three-decade career, I have faced multiple challenges, not all of which have been easy to surmount. But Banudhar’s faith in me gives me the strength to carry on. The author is a gender-reassignment surgeon and the head of department of reconstructive urology and andrology at Kokilaben Dhirubhai Ambani Hospital, Mumbai.  Photo courtesy: The Author