It is this smile that has kept us going all these years. 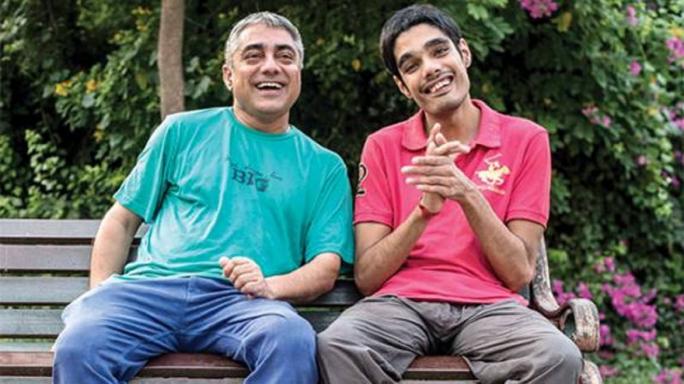 This is a small story, a look-in through a tiny window at our life. It's about our son Abhimanyu, his autism and us. But we have to tell you that it isn't the full story, there's a lot more to it.

Abhimanyu is 23, about five feet eleven inches tall. He lives with us, his parents, both journalists, in New Delhi. He is taller than both of us, towering over us like a 'gentle giant', as one of his teachers calls him.

I wouldn't be exaggerating if I say everyone loves him. He is, and has always been, a cheery, happy fellow, with a grin plastered across his face. He smiles thus, whatever the circumstances - it could be an inability to understand what's going on around him, an inability to speak full sentences, or extreme sensory distress, which makes him clap or screech loudly in public.

It is this smile that has kept us going all these years. It kept us going in the face of extreme distress, on his part, when he would cry for hours together, or have a tantrum, while we tried desperately to understand what was going on with him - the crying was so intense sometimes that the only way to soothe him was to pull him into the car and drive for hours around the city.

And it kept me going in the face of crippling embarrassment when I would take him out and he would 'behave oddly': How many children of 10 or 11 do you see flapping their arms and screeching and rocking? How many young adults do you see with a wet patch on their crotch?

We knew that this wetting was not due to not being 'toilet-trained'. We knew, by then, that his seizures, which began when he was around 11, could be the cause: They could be overt or subliminal, under the surface, and we would have to be on our guard all the time. But how do you explain to people who do not know about autism, or have met him for the first time, that he could wet the sofa or their bed without warning? On the whole, though, people have been very understanding, and we count our blessings.

The wetting still happens. The bewilderment we see on his face is a constant feature: So many times we think he's trying to tell us something but doesn't have the tools to. We end up surmising, sometimes right, sometimes wrong. I have to be especially alert because I take him out with me as often as I can; I have always believed that my son needs to be out and about, in public transport, in movie halls, even if he spills popcorn and is not really interested in what's going on on the screen.

In our journey with him, we have been accompanied by so many people who also know him well enough to figure out what he may want (there are times he will say a few words out loud, because he does have limited speech for his wants; at other times, a sharp clap is a communicating strategy). There are two 'didis' who live with us; our neighbours, who make it a point always to greet him; our numerous friends and family, all of whom I try to keep informed about Abhi's everyday life. We have a great support system, and I would like to think that I have been instrumental in creating it, speaking to as many people as I can, making bridges online and off: Journalism and autism, for me, have gone hand in hand.

Most often we get by. We get busy with work and friends. And Abhi spends his time at 'school' (the Ashish Centre for young people with autism, where he is learning basic life skills from loving, caring people, therapists and teachers who are madly fond of him).

He wins everyone over with his gigantic smile. It makes us forget. But then comes that occasional seizure which stops us in our tracks, which gets us started on the long, weary checklist all over again: Is his medication at the right level, does it need to be re-jigged, do we need to switch doctors? It makes me wake up with a start even before the daily alarm goes off at four in the morning, in my bedroom just above Abhimanyu's in our split-level home, my first thought being: Have I the energy to go down and check if he's okay?

That reluctance could be because the day gone by was a tough one, and because I'm always sleep deprived. Or because we've had a rare late evening, snatching a few hours away from our darling child. On such nights, I could come back wondering whether my boy is asleep. Or whether he's had a seizure that we haven't managed to catch, which sometimes leads to loss of bladder control, then and afterward.

And yet the life we lead, bringing up our child, a young man who hasn't spoken a clear full sentence to us in all the years since he was born, and then diagnosed with autism at nearly three - our precarious life together - is also supremely happy. I would not trade it for any other even if he is not and will never be like other children; in some ways, he will always be a child.

Growing up, he's said 'Rajmadey do', he's said 'Swimming jaana', he's said a myriad other things, mumbled in his unintelligible-to-the-world-but-clear-to-us monotone. He didn't listen to Justin Bieber or One Direction at age 13. He hasn't demanded to be taken to a concert in the Philippines by a band of the moment or a raging sex symbol.

But he's young, too, showing us flashes of his growing will. And he has his range of music to go to, his fallback options ranging from A. R. Rahman to the Gundecha brothers to the latest Bollywood ditty. Music is his life, as it is ours. It was always so, now it is so more than ever ...

So what am I trying to tell you? What am I trying to say, writing these words to share with you what lies beyond the six degrees of separation in the lives of people like us, Abhimanyu's parents, and many other parents like us who have been given a diagnosis of differentness?

I'm saying: Most of our children haven't demanded anything of us, ever. It's we who end up demanding a hell of a lot of them in our endeavour to meet society's norms. To make the differently abled as non-different and as indistinguishable as we can. To gain 'acceptance' - in the family, the home, the housing society, the mohalla, the street, the main road, the mall, the multiplex, the metro line, the market, the world at large.

I'm saying: We live, a kind of life, like all the other lives that are lived. And this world is as much Abhimanyu's as anybody else's. That's as much of a window as we could open right now. The entire house tour some other day.

EXCERPTED FROM A BOOK OF LIGHT, PUBLISHED BY SPEAKING TIGER, DELHI 2016.

Do You Like This Story?
148
4
Other Stories
Please enter valid text
corona updates
Must Reads
Latest Issue