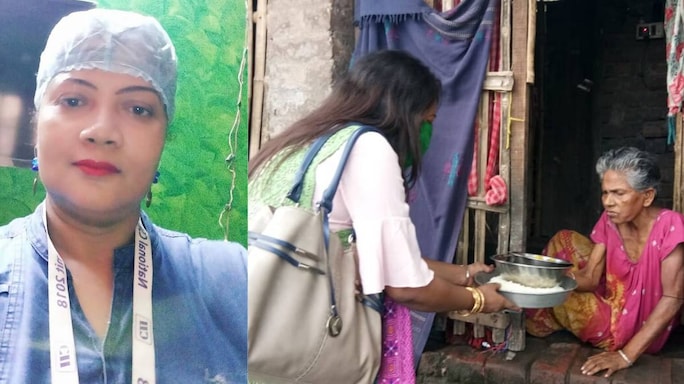 Taking charge no matter how tough the situation is and making the most of it has been something that Kana Mondal has been doing since her teenage years. But a visit to the Sundarbans soon after cyclone Amphan has left Mondal, 40, a bit overwhelmed. For the first time ever, she feels that she may have an insurmountable task at hand.

"I have seen poverty and people living in desperate conditions since my childhood, but I have never seen them so hopeless. They were first hit by the lockdown and then came Amphan. I have never felt so helpless looking at their condition," she says.

But she is not giving up. Mondal, who has been visiting the Sundarbans frequently in recent months distributing relief material among the people affected by the lockdown, wants to spend more time than ever before post Amphan. With houses flattened and most of their belongings washed away, thousands of families in the region have been forced to take shelter on the roadside.

As the founder of Hasta Udyog, a handicraft microenterprise in the North 24 Parganas in West Bengal, Mondal knew many women who were expert kantha embroidery workers. "They are now homeless and the materials they used to work with have also been washed away," Mondal says.

Mondal has been able to reach out to more than 2,500 families hit by the cyclone so far, but she says that it is not enough. "Besides rations, we are providing them clothes, books for children and have also distributed money. But, I can tell you that we still need a massive effort to uplift these people," she says. While she would like to start working again with the women of the devastated blocks of the Sundarbans, Mondal says that she has to first ensure that they start believing in themselves. "It's very hard to convince people to start handicraft work again when they don't have a roof over their heads and their children are going hungry. So my focus is on distributing food and coordinating with the local authorities so that these people can be rehabilitated at the earliest."

Mondal knows the importance of standing on one's own feet, as she has seen it all since her childhood⁠—grinding poverty while growing up, social ostracisation after she married outside her religion, and then the long struggle to establish her own business.

Trained in stitching and embroidery herself, Mondal understood the importance of training local women in her neighbourhood and slowly expanded her reach through Hasta Udyog. She has won many awards for her work, including the prestigious Jankidevi Bajaj Puraskar for Rural Entrepreneurship.

According to Mondal, she has been able to employ thousands of people in recent years in the region benefiting more than 25,000 families. "All these years, people climbed out of poverty through their own talent and hard work. Amphan has pushed many of them back into abject poverty again," Mondal says.

Mondal's phone keeps buzzing all day, with desperate women calling and sharing their problems. This local hero says that she responds to every call and assures help. "I have given hope to many people in the last 15 years. I cannot let them lose that confidence in me," she says.