A Life in Buttons

Bought at auction, a vintage cookie tin opens a window into a neighbour’s secreted heart 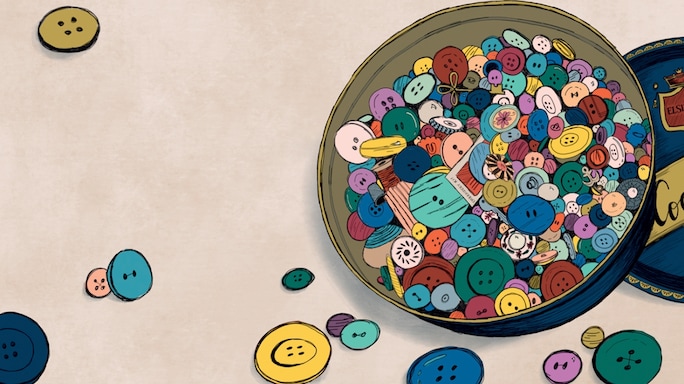 “Going, going, gone, for$3 to bidder No. 43, the lady in the last row, whitehat .” The auctioneer called out my auction number and location. I had just won the bidding for a 1950s cookie tin full of memories at an estate sale outside McConnellsburg, Pennsylvania, near the farm where my husband and I live.

Delighted at my victory, I took the box and gave it a shake. The con-tents rattled. I pried off the lid and took a peek. Inside were dozens—or maybe even hundreds—of buttons, pins and other items, all glittering in the sunlight. It reminded me of my mom’s button box. As a girl, I'd always enjoyed digging through it, just as my own daughters enjoyed looking through mine.

I listened to the auctioneer’s patter as more objects were bid on and sold. I bought some lovely embroidered pillowcases and a few other things. Soon my eye caught the movement of a swing on the front porch of the house. A petite older woman watched the happenings in her yard, her eyes wandering over the crowd, looking for the familiar faces of friends and neighbours.

As I carried my purchases to my car, I stopped to chat with her. We made small talk about the large number of people that had gathered and the prices her things were bringing. She told me she was selling almost all her possessions because she was moving to a nursing home in town.

Her eyes fell to the button box, and when she looked up, they were glistening with tears. I asked whether she minded if I sat with her awhile. She slid over to make room for me next to her on the swing.

I took the lid off the tin, and her gnarled hands lifted a handful of buttons and then slowly dropped them back into the container. Her fist closed around a delicate pearl button, now yellow with age. She smiled as she told me about the birth of her first child and the special pearl-buttoned christening outfit that would be worn by five more babies before time wore the garment thin.

I noticed a large, dark brass military button and asked her about it. “From my first husband’s uniform,” she said.“It’s one of the few things I had to remind me of him when he didn’t return home alive.

”They had been married seven months before he left to serve his country in World War II. “I married his best friend two years later, and we had a good marriage,” she told me.

“That’s the way it was in those days. Someone always looked out for the widows and children. ”As we sifted through the box together, we found hairpins ranging from black to brown to shades of grey and even white. Each colour noted the passing of time and its effect on her hair. When I pulled a small key from the box, I heard the sharp intake of her breath. It was the key to a music box that played a special love song, she said. She’d lost it years ago. From my hand to hers, I passed the key to her memories.

We found a Sunday school pin holding a bar for perfect attendance in every year except one. She explained, “The year my mother was sick with cancer, I stayed home on Sundays with her so my father could get to church. He never missed a Sunday until he died, 15 years ago.”

Garter clips, wooden nickels, snaps and ruby buttons took her further down memory lane. I learnt about her wedding, the birth of her children and much more of the life she’d led for 89 years.

After our chat, I set the woman's box of memories down on the swing and slid my hands into hers. I knew we would talk again when I went to visit her at her new home. And I knew that when I reached my own home, my heart would pull me to my sewing room, where I would rediscover my own lifetime of memories in my own button box.