A Lecturer With A Big Heart And Police Play Good Samaritans 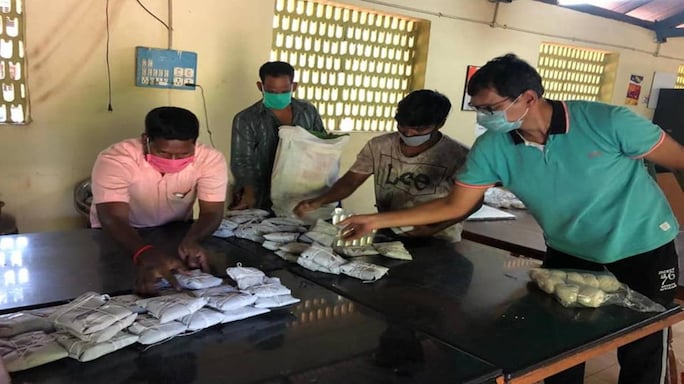 Even though Puducherry hasn’t been affected by the coronavirus as badly as some other regions, there is no denying that the lockdown has taken its toll, especially on the poor, in this union territory, known for its beautiful beaches and serene surroundings.

Rather than sitting at home and living in fear of the virus, Sasikanta Dash, registrar of Pondicherry University and a former college principal, decided to step out and take care of those who have borne the full brunt of the lockdown.

Initially, Dash started a WhatsApp group for senior citizens and helped anyone who needed medicines but was scared of stepping out. He later started distributing kits, paying from his own pocket, for essentials like rice, sugar, salt, oil, vegetables and lentils.

As more and more people started to pitch in, Dash reached out to people living in the villages around the city of Puducherry.

According to Dash, a kitchen in Tagore Government Arts and Science College, where he was principal before his current assignment, has been cooking food for those in desperate need. The food is then distributed by Dash’s team of volunteers. Around 600-700 families are benefiting every day, thanks to Dash.

Police come to the rescue of migrants

Odisha policemen did something that 50 migrant labourers would never forget.district

When the police in Kantibanji town came across a group of exhausted labourers walking towards their homes, they were taken to a quarantine centre and screened for coronavirus symptoms. They were also given food.

The migrants told the cops that they had been travelling by foot from Visakhapatnam to their native places in Jharkhand, hundreds of kilometres away. Moved by their plight and fearing that they may suffer more due to the rising heat, the police pitched in with money to arrange a bus to take 48 of them back to their villages.

The Kantibanji police have been praised by their higher-ups for their selfless service.