The Beauty of Night-Blooming Flowers 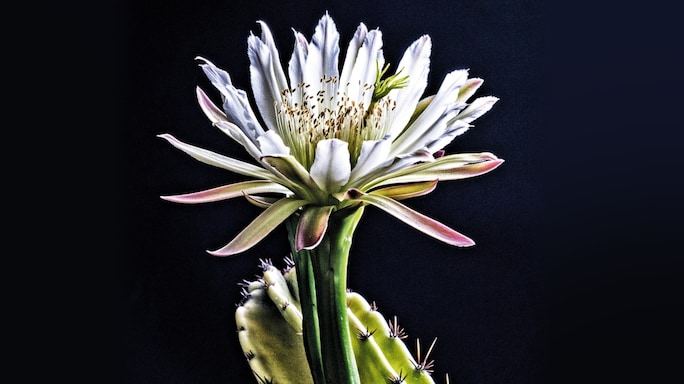 By day, Hylocereus undatus resists friendship. A climbing cactus native to Mexico and Central America but now thriving in tropical and temperate regions around the world, it can grow to 10 metres tall, colonizing trees and rock walls with extended, fleshy stems, massed like the arms of an octopus. All year it sprawls, a spiked barricade—and then, one night, the flowers come.

Starting around dusk (depending on where in the world you are, how warm the day is, the ponderousness of clouds), the pale, waxy buds, which resemble elongated artichokes, start to open, the pink-tipped sepals peeling back millimetre by millimetre until, by midnight, the secret is told: the blossom announcing itself, so white it seems to glow, with skinny yellow streamers at its throat. Its lifespan is a matter of hours; in the light of day, it retreats and shrivels, a ball gown turned to rags.

The pageantry of flowering that for many plants arcs over days and weeks in spring and summer—what we read as resurrection, the earth coming back to life after a hard winter—is for the night bloom compressed into a single wanton evening. All that is left to greet the waking is a twist of spent petals: You missed the party.

But this is a projection of our own sense of loss, for we are not the flowers’ chosen audience. By design, night bloomers are beacons, their moonlight-reflecting blossoms making a theatre for moths and in turn their predators, bats, who collect and scatter pollen to keep the plants alive. Nocturnal blooming is all strategy rather than poetry, purposefully putting on a show while other plants sleep, when there’s less competition for pollinators. We are just the unbidden suitors hoping for a glimpse of their glory.

Of course, it may be this very indifference that attracts us, makes us want to reject sleep and propriety and stay up all night (when all the most interesting things happen). During the hardscrabble years of the Great Depression, people held vigils for the coming of the flowers, putting notices in newspapers to proclaim that blooming in their backyards was imminent, should anyone care to swing by after nightfall.

Often the manifestation had the quality of a miracle: In the 2010 book The Warmth of Other Suns: The Epic Story of America’s Great Migration, writer Isabel Wilkerson recalls how, “once a year on a midsummer night that could not be foretold,” her grandmother would invite neighbours over to her porch in the US state of Georgia to sip sweet tea and eat ice cream until the cereus flowers yawned wide. 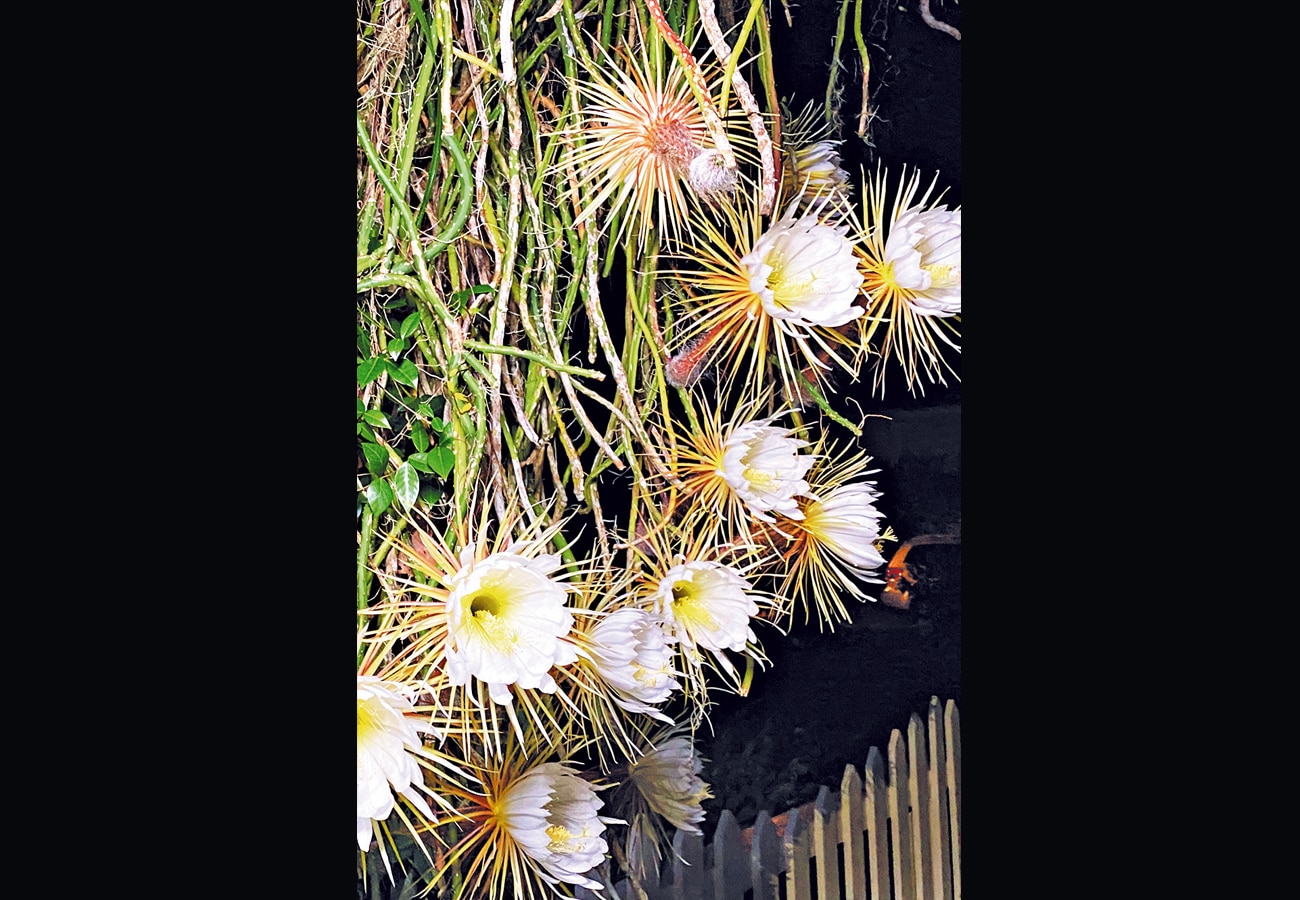 The cactus Peniocereus greggii is also known as ‘queen of the night’. Credit : Shutterstock

These days, at the Tohono Chul botanical garden in Tucson, Arizona, staff monitor America’s largest private collection of Peniocereus greggii, another night-blooming cactus that is known as queen of the night, although it spends much of its life resembling nothing more than dead twigs.

Once buds appear, they’re carefully measured until they hit 12 centimetres. Then, the countdown begins and the public is welcomed to wander low-lit trails and spy on the flowers-to-be.

The rarity and difficulty of predicting the event—of catching the flowers in the act—can make witnessing it a mark of status. Indeed, there is a scene in Kevin Kwan’s 2013 novel Crazy Rich Asians in which a Singaporean family of ungodly wealth amasses a crowd to pay homage to another night-blooming cereus species, known as tan hua in Chinese and part of the idiomatic term tan hua yi xian: ‘fleeting glory’. (In China, after wilting, such flowers are dried and added to soup, and reportedly offer detoxifying benefits.)

But the plant, and its dinner-plate-sized flower, couldn’t care less about the glamorous guests and their desire for spectacle; it follows no timetable and deigns to open only at the time of its choosing.

Not all night-loving flowers have such brief lives. Some, like tuberose and gardenia, open in the day but grow more potent and explicit after sundown, exuding a heavy-lidded fragrance of sweetness teetering on decay. This is in part the work of indole, an aromatic compound present in foul-smelling substances like coal tar and faeces, which in trace amounts gives the most delicate of flowers an almost animal opulence.

Other nocturnal blossoms deploy scents like siren calls: The creamy whorls of the moonflower vine hint at vanilla and sunscreen, while the heavy bells of brugmansia are franker and muskier, verging on narcotic.

I still remember, as a teenager, the sudden loucheness of honeysuckle in the late spring dark, stopping me barefoot in the wet grass. It smelled of ripeness, of knowledge, and all I’d never been told. “How can I rest?” the American poet Louise Glück once wrote of a night beset by the insistent exhalations of mock orange blossoms:“How can I be content when there is still that odour in the world?”