'Can We Predict Earthquakes?', And Other Questions Answered

A series of mild tremors in India’s National Capital Region has shaken the confidence of people. This primer can settle some worries San Francisco in the wake of the 1906 earthquake (Photo: Edith Irvine, via Wikimedia Commons)

Delhi and its surrounding areas have been shaken by more than 10 low- to moderate-intensity earthquakes in the past two months. This has led to many—including experts—fearing that these could be precursor to a major earthquake. Here, we explain the science, the truth behind predictions, danger zones in India and whether we are prepared for a major earthquake.

What is an earthquake and what causes it?

An earthquake is exactly what the term suggests, an intense shaking of the Earth’s surface. This shaking is caused by the passage of seismic waves through the Earth’s crust.

The Earth is made of four layers—crust, mantle, a liquid outer core and a solid inner core. The crust and top of the mantle make up a region called lithosphere. This layer is made up of small pieces, called tectonic plates that constantly move and sometimes get stuck at the edges due to friction. “When the stress on the edge overcomes the friction, there is an earthquake that releases energy in waves that travel through the Earth’s crust and cause the shaking that we feel,” explains the United States Geological Survey (USGS).  The location/point where an earthquake originates is called its epicentre.

How do you measure an earthquake?

Scientists can study the seismic waves on a seismometer, and the information recorded on the device helps them determine the time, location and intensity of an earthquake. One of the most common ways to measure an earthquake is by determining its magnitude. The very popular Richter scale, however, is an outdated method and has been replaced by more modern scales, like the Moment Magnitude scale, which are more accurate.

When was the first earthquake recorded?

There is no definitive answer to this. However, the first detailed information regarding an earthquake dates back to 1177 BC in China. Scientific study on earthquakes started only around the 18th century.

Between December 1811 and January 1812, a series of earthquakes took place in Missouri, US. These quakes were so powerful that the tremors were felt by people in Boston and Denver too.

India witnessed a massive earthquake just three years after Independence, on 15 August 1950. Now known as the Assam Earthquake, it had a magnitude of 8.6 and wreaked havoc in Assam and Tibet. The then Prime Minister Jawaharlal Nehru visited the affected areas in Assam, which was hit by landslides in the wake of the quake. According to UC Berkeley Seismology Lab documents, this is what he said: “These rivers have changed their colour and carried some sulphurous and other material, which spread a horrible smell for some distance around them. The fish in them died. The remains of villages, animals, including cattle and elephants and large quantities of timber floated down these raging waters.”

In recent times, the earthquake in Haiti in 2010 killed more than 3 lakh people, as per the Haitian government estimates, while close to 15 lakh were displaced. While the first shock had a magnitude of 7.0, the two aftershocks were 5.9 and 5.5 in magnitude even as a series of aftershocks were felt over the next few days. 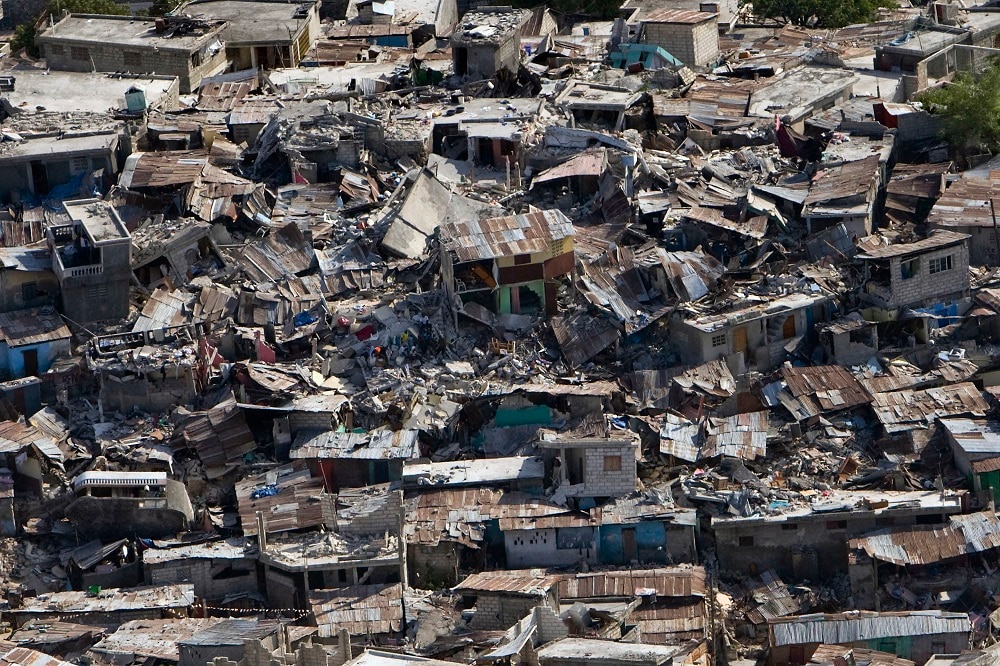 The damage in the aftermath of the Haiti earthquake (Photo: Wikimedia Commons)

Is Delhi located in an earthquake-prone zone?

India is divided into four seismic zones—2,3, 4 and 5, and the risk of an earthquake increases with the number. Delhi falls under Seismic Zone-4 (high risk) and has witnessed earthquakes above magnitude 5 since early 18th century. On 15 July, 1720, Delhi was hit by an earthquake of magnitude 6.5 while another of 6.8 struck the capital in September 1803.

Skymet Weather, a private Indian firm that provides weather forecast, says Delhi ranks third among all earthquake-prone areas in the country. Given the capital’s high population density, an earthquake may cause severe damage to life and livelihoods.

Can you predict earthquakes?

The USGS is rather emphatic in its answer. “No. Neither the USGS nor any other scientists have ever predicted a major earthquake. We do not know how, and we do not expect to know how any time in the foreseeable future,” it says on its website.

Talking about a series of “small earthquakes” leading to many people speculating about a large earthquake, the USGS says that “most such precursors frequently occur without being followed by an earthquake.” So, in other words, a real prediction is not possible.

But scientists are more hopeful of earthquake early warning (EEW) systems being put in place so that people can be alerted a few seconds before one spreads. For instance, Japan has installed earthquake monitoring systems across the country that are connected to alert instruments. The alerts go off seconds before the shaking waves of the earthquake reach certain areas. In this way, people get a head start of a few seconds in which they can protect themselves from the devastating effects in case the tremor is a large one. How prepared are we?

India's National Center for Seismology (NCS) that monitors earthquake activity in the country emphasizes on the importance of earthquake-resistant construction of buildings and upgradation of structures that are not following the 'building codes' provided by local governments.

India faces a major problem here. For instance, according to an India Today report of 2019, 90 per cent of buildings in Delhi are not earthquake-resistant. And Delhi falls in the dangerous Seismic Zone-4, which, according to experts, can experience earthquakes of 7 to 7.9 magnitude. According to the same report, if an earthquake of 7 or more than 7 magnitude hits Delhi, then the national capital can suffer massive losses.

It is no different in other parts of India that fall under Zone-4, including Jammu and Kashmir and Maharashtra. The most dangerous Zone-5 includes some Himalayan regions and Kutch in Gujarat.

It is said that earthquakes do not kill people, buildings do. That is India's biggest problem.