Even though the pandemic shows no signs of abating, there's no dearth of bizarre antics in the India, the land of the strange and uncanny 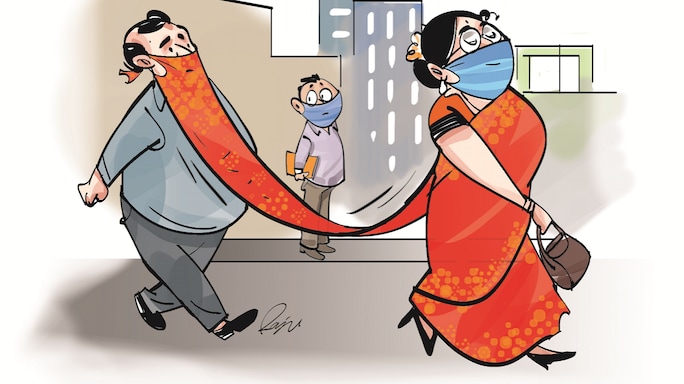 Together, in sickness and in health (Illustration by Raju Epuri)

An Aligarh jewellery store recently found itself in the thick of some COVID-19-proof criminal action. Three nondescript masked men entered the shop, held their hands out for a quick spritz of hand sanitizer, whipped out guns and robbed the establishment of a cool ₹40 lakhs worth of jewellery—all under a minute. The incident was caught on a security camera and Uttar Pradesh law enforcement swiftly swung into action, capturing our conscientious criminals within a few days of the loot. With a pandemic on the prowl, it’s nice to know that even the criminal classes are doing their best to adapt to the ‘new normal’.

A man’s bid to rid himself of the drudgery of grocery-shopping landed him in bulk-buying hell when a bungled delivery order resulted in an entire truck-full of rice delivered to his doorstep. Weary of stepping out for a purchase every day, our protagonist arranged to buy this daily staple in bulk, but wires got crossed and he found himself caught in tense negotiations to undo this shopping mishap. With a furious wife hot at his heels and a lorry-driver who wouldn’t take no for an answer, the man’s misadventures were made famous by his brother-in-law, who live-tweeted this epic tale of a man with too much rice. All that isn’t news

Thanks to Sudarshan TV, prime-time television news hit a new low. The channel’s partially aired show on 'UPSC Jihad', anchored by editor-in-chief Suresh Chavhanke insinuated that a conspiracy had been hatched to ‘infiltrate Muslims' into the civil services—all this amidst visual cues suggesting links to Islamist terror groups. Further broadcasts of the show, which has been widely condemned for its bigotry, were stayed by the Supreme Court, which observed that the show's “object, intent and purpose” was to “vilify the Muslim community”. Dismissing the show's fabulations, the judges went on to remind Chavhanke that journalistic freedom is not absolute, and that the court was concerned about both “free speech and dignity”.

For the Indian Prime Minister's recent 70th birthday celebrations, YouTuber Anmol Bakaya had something special planned. This fanboy chanted the Indian Premier's name for 24 hours, hoping to catch the attention of the object of his affection, and garner online buzz. Bakaya, by his own admission, found himself struggling after 12 hours and sought strength from the Almighty to carry on. Now, that the 24-year-old has spent 24 hours of his life uttering the Prime Minister’s name in vain, he was quoted as saying that this was an “interesting experience”. We agree, though maybe not in the same way.

Do You Like This Story?
10
4
Other Stories
Please enter valid text
Must Reads
Latest Issue