Caretharsis: When The Healers Come To Heal Themselves

Healthcare professionals aren’t just battling COVID-19 but also their own fears and anxieties. An online platform lets them process it all—in a safe, non-judgemental space 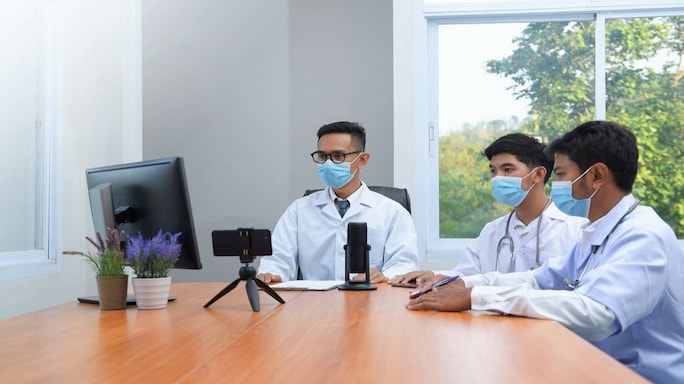 “Three of us doctors were quarantined in Singapore. It was like a holiday and we were having a good time. Next to us was a dilapidated building packed with quarantined people and one day the place catches fire. We try to help conjoined twins who have got hurt in the process.” Dr Rajesh Lavakumar, a Bengaluru-based radiologist is sharing this dream with other doctors in the Caretharsis Online Listening Circle.

Since the past four weeks, every Sunday at 8:30 pm, doctors have been gathering on this online platform to share and listen to each other’s experiences during the pandemic. “Everyone acknowledges how social status matters even now and determines our treatment and shelter and that we are privileged to be in safe spaces with our families,” recalls Lavakumar.

Caretharsis is organized by Bengaluru-based First Drop Theatre as an initiative for healthcare workers that has been ongoing for the past two years, but the recent crisis lent it greater focus. “We wanted to hear what doctors are feeling through the Covid19 crisis but it is not necessary to express or share everything. You can just listen. Sometimes listening also helps you reflect,” says Radhika Jain, co-founder and artistic director of First Drop Theatre.

An expressive arts therapy practitioner, she applies it to the discipline of theatre. “We don’t implement it in these sessions—we just want the participants to have conversations freely. We have envisaged it as a safe space where they won’t be judged.”

The session begins with a mindfulness exercise conducted by a facilitator. Jain then proceeds to show an image that becomes a stimulant for the participants to share their stories. After someone has shared a story, she asks the participants if the story has impacted anyone and how.

Jain recalls how a doctor spoke about treating a patient for one condition but later realized the person was also COVID positive. He was worried and anxious while being quarantined at home with his family. Another doctor was conflicted: while being on the frontline, he wanted to be fighting this crisis, but at the same time, was also longing to be with his family in a different city. He mentioned that even after the lockdown, they would be in different cities as he not only wanted to continue fighting the situation but also does not want to put his aged parents at risk. Most of the participants’ fears and dilemmas are entirely valid.

To take part in Caretharsis, healthcare professionals need to register through a link—care is taken to maintain their privacy and confidentiality. Also, participants are discouraged from mentioning or discussing the names of their organizations. No more than 15-20 doctors attend it every week, but a few like Lavakumar do not miss a single session.

Jain has noticed a subtle shift. “In the first week, there was a lot of anxiety, which has now transformed into acceptance of the situation—that the virus is here to stay and they need to deal with it better. They want to work on their immunity,” says Jain.

So far, doctors from different parts of the country—Chennai, Jaipur, Mumbai, Dubai and the UK—have attended the meets but not a single nurse has taken part. “I think they are just very busy. Perhaps we could start a separate group for them.

”Lavakumar says there could be more participation from doctors too. “I reached out to a lot of my colleagues and close friends in the UK and US, some of the worst-affected countries. We really wanted to know how doctors in Delhi and Mumbai are dealing with it but not many felt comfortable with the idea. Doctors, like soldiers, are always told to not succumb to fear and I feel they are scared to express their anxieties. It’s all bottled up and if they let it out, they think it will consume them. It’s not easy for doctors to say ‘Ok, I am feeling this’,” he says.

In one of the sessions, Lavakumar remembers a doctor “who did not share any story but she was quite emotional.” He also recalls a few dental surgeons sharing their dilemmas. “Some of them said their procedure costs less than the PPE that they have to charge the patients for and together it becomes quite expensive. Another one admitted to feeling vulnerable during dental procedures, as they expose them to a greater risk.”

According to Jain, the listening circle will become even more relevant after the Post-Traumatic Stress Disorder sets in. “Right now most of them probably don’t even realize how it is affecting them but after a point, they would want to take care of it.”

(This was carried after the permission of the doctors mentioned in the copy.)

To register for Caretharsis Listening Circle, head over to http://shorturl.at/tvGM4.