No Child Left Behind and Taking the High Road

Good News for a Better Planet 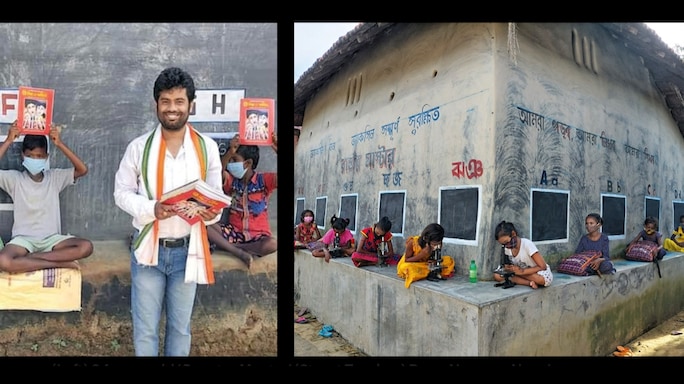 No Child Left Behind

Education With long-term closure of schools disrupting the learning journeys of thousands of young children, one resourceful educator found a brilliant solution—turning building walls into blackboards and roads into classrooms where kids can attend classes while following COVID prevention guidelines too.

Concerned that his students—many of them first-generation school-goers—would give up on education completely, 34-yar-old teacher Deep Narayan Nayak created these ‘street schools’ in the tribal village of Joba Attpara in West Bengal’s Paschim Bardhaman district to help around 60 children overcome the disruption in their learning journeys. “I would see children loitering about the village, taking cattle for grazing, and I wanted to make sure their learning doesn’t stop,” Nayak says to Reuters. Along with mask-wearing, social distancing and handwashing, Nayak’s pupils use various academic supplies such as books, chalk, and even microscopes as well.

Technology According to the Department of Science and Technology, a team of Indian scientists from the Institute of Nano Science and Technology, Mohali, has, for the first time, developed a reactor capable of producing hydrogen using sustainable sources such as sunlight and water on a large scale (around 6.1 litre in eight hours). This achievement marks a meaningful step towards combating the devastating effects of climate change by generating carbon-free fuel from renewables and control our carbon footprint. Hydrogen produced this way can provide electricity to remote areas through fuel cells, and has the potential to eventually power transformers and e-vehicles as well.

Public works Lost on their way to perform a sanitation survey of primary schools in Odisha’s Kandhamal district, Lusmin and Rupakanta Pradhan stumbled upon a local family hard at work constructing a road amidst the dense forest. They soon learnt that Dhaneswar Pradhan, 42, and his family, residents of Bandopanka village, had taken up the task of building a motorable road to connect his village to one six kilometres away, after his many petitions for one to local authorities were frustrated. Their efforts, quietly and independently ongoing, found audience when the two Pradhans recounted the tale to the media. Authorities at the block development level, soon became aware of the story, and has now promised swift resolution of the villagers’ long sought-after needs.

A Bank with a Difference

Environment Altruistic individuals and organizations serve the community by distributing ready-made meals to the poor, needy and homeless, but Gurugram-based Sameera Satija realized a serious problem with the way these efforts are executed. Most drives of this kind employ single-use dining ware. While cost-saving and convenient, these also add to non-biodegradable items in our landfills. Also, some disposable wares are made of styrene—a potential carcinogen. “People are not aware of the fact that while they are trying to do good by donating food, they could also be harming the receiver’s health,” the 48-year-old says.

Aware of the dire need for a solution, in 2018, Satija bought 100 stainless steel and 200 glass tumblers and shared it among three groups offering free potable water to the public. The initiative was a success and sparked the ‘Crockery Bank For Everyone’—a free-for-use cutlery bank that provides steel utensils for events through social media. “Amid the pandemic, we’ve lent over 1,500 utensils per month. The most satisfying aspect is counting the number of single-use plastics we’ve saved, which would otherwise end up in landfills.”