My Mum had wanted Dad to find new love. I was the one having trouble with it All illustrations by Meredith Sadler

It had been my mom, Paola, who pushed my dad to find a new lover. She had just turned 56 and had been  sick with metastasized colon cancer for six months.

“But you won’t be gone for a long time.”

“But I will, one day, and then you need to get on a dating site. Lisanne will help you. Go find a nice woman, okay? But promise me one thing. Don’t go slutting around because that’s terrible for the children and for those women.”

Search, find and love. Dad locked this advice away in the back of his mind and it didn’t resurface until over a year after my mother died. That first year had been pitch black, for all of us—I didn’t know what pitch black meant before that year.

In a practical sense, Dad managed. He had always been able to fry his own eggs. He went back to work, walked the dog, picked up his tennis lessons and every week he placed fresh purple tulips next to a photo of his wife—red lipstick, huge smile, blue, blue eyes, glass of wine.

After that first year, things brigh-tened up a bit. “Is it me, or is it a bit sunnier?” Dad had asked one day. It wasn’t climate change, or even the weather. It was him, and a new stage of mourning. I had felt it myself, the transition from pitch black to grey.

Even then, he wanted it. New love. He wasn’t so much ready for it as eager to find out if he could still love. And he really didn’t want to spend the rest of his life by himself. My brother and I had left home years ago, for study, work, love. Dad was alone—day in, day out. At night, before he went to bed, he switched on the television so as not to hear the silence.

“If I don’t do it now, I may never,” he told us. He had spoken to fellow widowers who had remained single forever. And it wasn’t even that bad. But, they were sad and alone. For it is a painful fact that not all the people who say ‘I’ll stop by soon’ after the funeral actually come by.

We got it, we cheered him on, quietly convinced that he wouldn’t.

Dad was very clear: “If I don’t look for love now, I may end up sad forever.”

So, we signed him up on a dating site as a remedy for eternal heartache. Dad may kill me for writing this, but he thought it necessary to lie, and take three years off his age. And the photo he pasted into his profile was one in which he had cut my mother out. If you looked closely, you could see a couple of her strains of wild blonde hair near his face. It made me laugh, because I knew my mom would have. 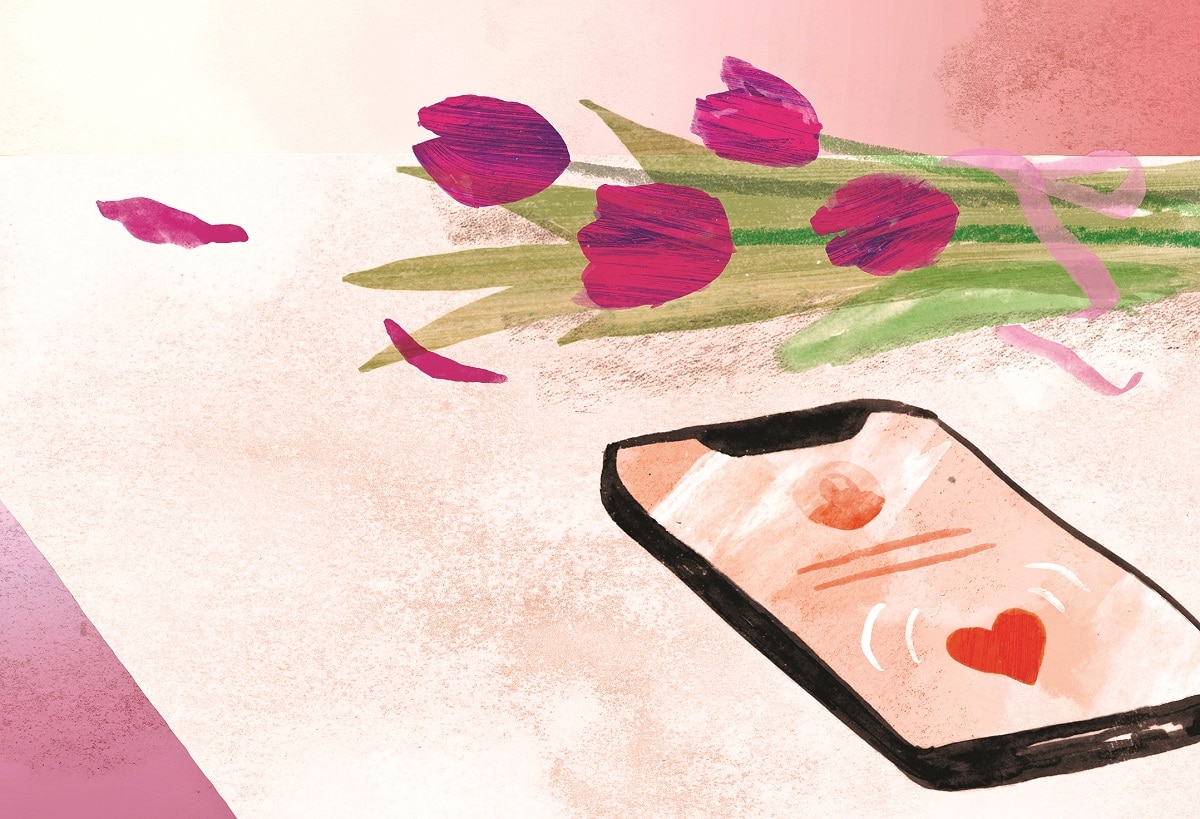 His first dates were futile, even hilarious at times. At one point Dad texted my brother and me to ask if it was “very rude to leave after the appetizer.” That’s when I taught him the first rule of dating: Never have dinner on a first date. Drinks are safer.

And then Moniek came along, and it was the appetizer, the entree and even dessert. She was sweet, caring, blonde (like Mum), a teacher (like Mum), loved purple (like Mum), dressed cool (like Mum) and Dad seemed happy with her (as he had been with Mum).

I told him I was happy for him, because I felt that I should. Friends and relatives said “Gee, isn’t that nice for your dad?” But I wasn’t at all sure about how nice I thought it was. I wasn’t sure if I could handle seeing another woman by his side. I wasn’t even used to the emptiness my mom had left there.

As Dad fell in love with Moniek, my antipathy grew. For weeks I postponed the moment that I would have to meet her. Dad pushed me to come, more than once. He wanted to share his happiness with us and wanted to know what we thought of her.

“It matters how you feel,” he told me. I understood. I had always needed my dad’s approval for my boyfriends.

So, my brother and I gave in. I wanted to ask Dad not to be clingy with her, but didn’t. I didn’t want to begrudge him his happiness.

They did cling to one another as I would have with a new boyfriend. But I was young and Dad was 62 (or 59 as his online profile had said). Moniek was sweet, she had brought us presents, she was interested, but she wasn’t Mom.

It was difficult. But there was a bright side. Since Mom died I had spent one day with my father, every weekend. And now Moniek was there. And I wasn’t, which was fine. I had full weekends again.

But having her in our house was the thing that bugged me the most. In our house. In my parents’ bed—the bed that I had been born in 30 years ago. The bed where my brother and I had escaped the spiders in our rooms or the monsters in our heads.

That bed was now dad’s and Moniek’s, and I shunned the bedroom as if it was infected. What had once been the most secure place in the house was no longer mine. 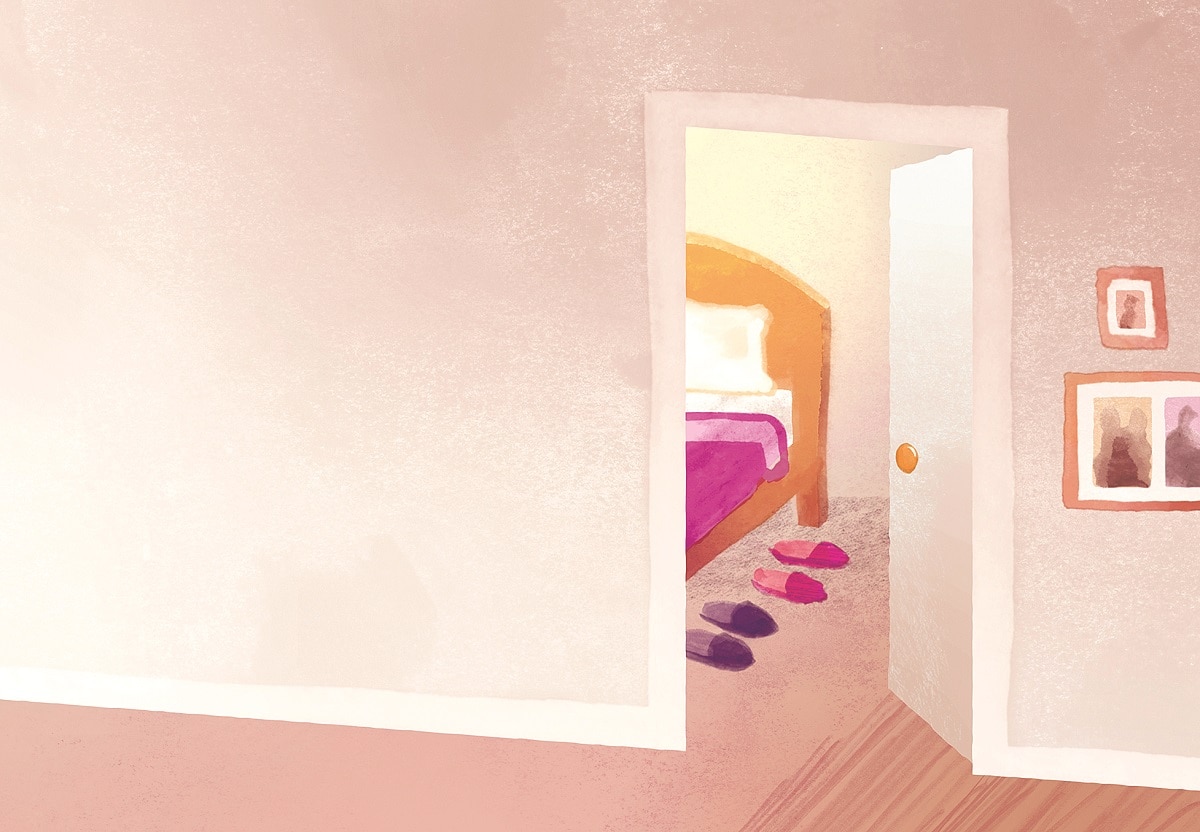 I told Dad how I felt. “I understand,” he said. “Do you want me to ask Moniek not to stay over this often?”

I could shun the bedroom, but other places were impossible to avoid. Like the bathroom. I was terrified of going in there, but it was impossible not to.

The first time I went into the bathroom since Moniek started spending her weekends with Dad, I found her jar of day cream on the blue stone shelf over the sink.

It made me furious. Really furious.

That was where my mother’s day cream should be! And only hers. What was she thinking? That she could take over? And where were my mother’s things? Did she throw them away?

My stomach turned, my breath stopped, my lips were glued together. I yanked open the top drawer of the dresser where my mother had always kept her hairbrush, her hairbands— where they had been, untouched, until now.

There they were. Not one brush, but two. Moniek’s and Mum’s. Like sisters, side by side.

My dad and Moniek are still together, and we see each other regularly. It is still uneasy at times, but we talk about it. There is room for our grief over Paola, and there is room for Moniek’s love for my father.