Compassion is their calling

Despite limited means and strong biases, stray animal feeders continue to care for thousands of community dogs across the country 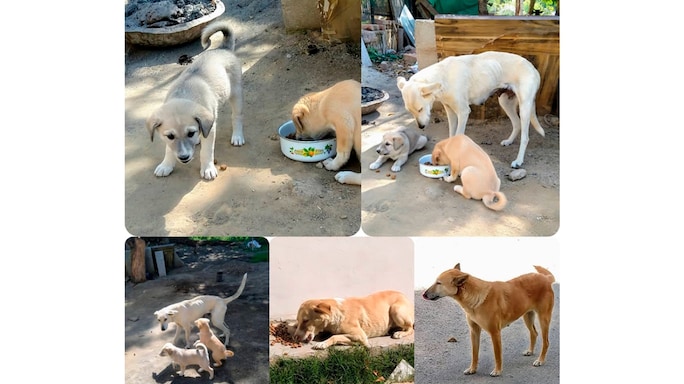 A feeding drive by RGOAL

Last year, 26-year-old Riddhi Paliwal started to experience anxiety attacks. In her second year of CA, the Bhopal-based Paliwal couldn’t concentrate on her studies. Along with the anxiety of the ongoing pandemic, she was burdened by another deep worry—with the enforced lockdown and self-quarantine mandates, how would the stray animals under her care survive? As donations shrunk considerably, vets became less accessible and movement became restricted, Paliwal’s sense of helplessness took a toll on her mental health.

Being a stray dog feeder is never easy even in the best of times. Practical challenges and backlash from residents are just a few of the daily challenges Paliwal faced along with her friend and colleague Akash Saxena, with whom she runs the NGO Kartavya Society in Bhopal. Through it all, they feed hundreds of dogs and rescue emergency cases everyday around the city. “We face a host of new challenges constantly—either funds, a difficult emergency case, finding a vet at odd hours. I am always problem-solving and the stress can sometimes make me panic,” she says. Even at the time of writing this story, the duo was worried about a dog with a deep gash around his neck. “Someone had tied a wire tightly around his neck which left him seriously injured. The dog is on the outskirts of Bhopal and is scared of humans. He runs away as soon as someone approaches him. We need to help him,” Paliwal frets.

The task taken on by animal lovers like Paliwal is a herculean one. In India, the stray dog population alone is estimated to be somewhere between 35-40 million. Apart from non-spayed, non-neutered indie breeds that produce litters, many of these include well-bred dogs rejected by puppy mills and commercial breeders as well as dog parents who thoughtlessly buy and then abandon them. Stray and abandoned dogs rely on the food waste generated by eateries and restaurants but the lockdown cut off this supply leading them to migrate outside their territories to locate sustenance and became more competitive and aggressive to survive. But, efforts by individuals and organizations to keep stray dogs fed, vaccinated and sterilized serve to mitigate human-animal conflicts in a big way.

Like Paliwal, students Hari Krishnan and Apoorva Ransingh from Raipur, also balance their studies with running an animal welfare effort. SATWAY (Strays All The Way Chhattisgarh) began in 2020. “During the first lockdown we realised that without leftovers from restaurants and hotels, the animals would starve. So we started regular feeding drives under SATWAY,” says Krishnan. Their day begins at 5 am when they head out to feed 100-150 dogs with dry dog food soaked in water. Afterwards they log in to attend online classes. A rescued dog with Hari Krishnan of SATWAY

Shikha Rawat and 25 volunteers of Roshika Gang of Animal Lovers (RGOAL) head out to various locations in South Delhi feeding around 100 stray dogs, cats and cows. Masked up, carrying sanitizers and wearing gloves, they ride two-wheelers carrying sacks of food. Their furry friends are already on alert waiting for their meal. Indian dogs or Indies are not only sturdy but exceptionally intelligent; they can sense the arrival of their feeders from a distance. The meal—usually store-bought packaged dog food—is laid out vertically to ensure a quick and hassle-free job. The exercise is repeated in the evening. While the animals get their two-a-day meals, many local residents find the effort alarming.

“Last year, one evening we were feeding dogs near a park. The dogs were obviously very playful and excited to get food so passers-by started to object. We calmly explained that dogs also need to be fed but they were not listening. With great reluctance they let us carry on but I know the residents of the area didn’t like the strays around and would throw stones to shoo them away,” says Rawat, who started RGOAL in 2019. Facing backlash and protest from community residents against the feeding of stray animals is a continuous battle for animal activists and carers. While most conflicts involve verbal altercations, instances of violence and assault against feeders have also emerged. In a viral video, Ayesha Christina, the founder of Neighbourhood Woof stood in a Delhi police station clad in a blood-soaked t-shirt and bruises on her face, narrating the physical injuries she and her colleagues sustained at the hands of locals while doing their job.

According to 41-year old Nikita Singh, an HR professional who volunteers with Stray Dogs Feeder, an initiative led by Ashish Bhide in Virar, Mumbai, “We would quietly feed and check on a litter of puppies whose mother had died. Residents of the nearby society kept watch on us and one day around 8 to 9 people had us surrounded, yelling and threatening at us,” It was intimidating for the only two volunteers present on the spot. “We tried to reason with them that these newborn babies lying in the corner of barren land can hardly be a nuisance. But we eventually shifted them as the locality wasn’t safe and had no sympathy for orphaned puppies.” Singh and her team members avoid confrontations if stuck in a tricky situation. It works for both their safety as well as the animals. “After you leave, there is a chance the angry residents might harm the dogs and there is no way I would want that.”

The power of social media has helped spread the word about such acts of violence and to garner support for the cause. Most animal feeders maintain a strong presence on Instagram and have a curated wish list on their bio listing essentials like dog food, food supplements, chew bones, pet nursing milk bottles, and skin ointment etc. The followers can directly order items from the wish list. In case of medical emergencies, the animal activists post vet bills, transport and medicine expenses and appeal to their followers to donate. SATWAY’s Krishnan and Ransingh are currently fostering 8 dogs and 7 cats in their respective homes. These cases need prolonged medical and dietary attention and leaving them back on the street wouldn’t be ideal. But the responsibility takes its toll. Time is precious and expenses run high for the proper animal care. “Branded dog food is quite expensive. Everyday feeding costs us roughly Rs 1500. We have been lucky enough to find a vet who takes care of the emergency cases we find for free. Our followers donate generously but when funds dwindle, we dig into personal funds.” 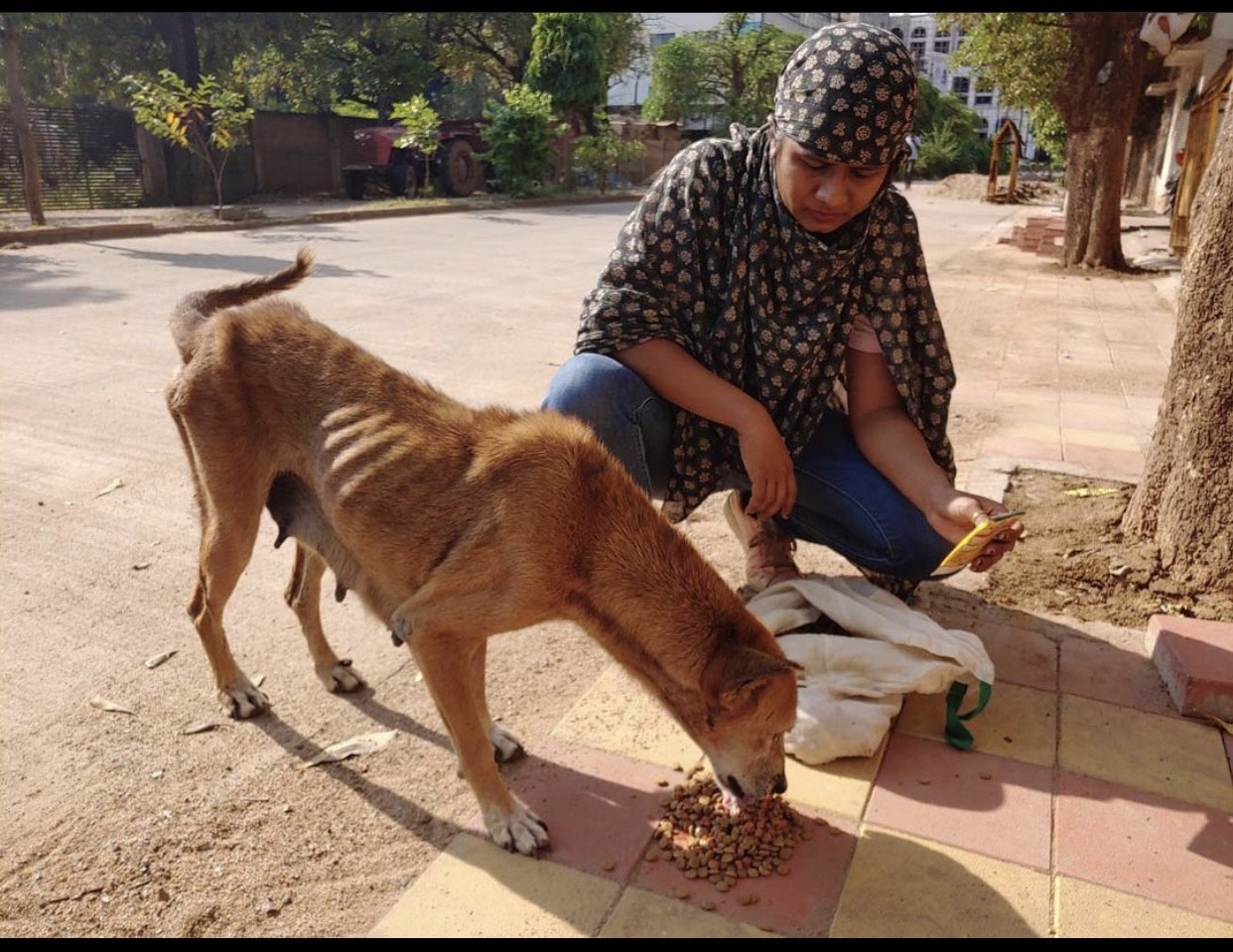 On months when RGOAL donations run dry, Rawat turns to friends and family members for help and requests vets to accept post-dated payments. Their costs run up to Rs 30,000 for food alone. Transportation and vet expenses are extra. She states, “No matter what, we can’t compromise with the basic necessities for these animals.” In a country lacking in resources, efficiency and discipline, these ordinary citizens who have taken up the mantle of saving innocent animals from daily threats seek only the support and compassion of like-minded people. “If each and every person starts thinking about saving at least one animal from time to time, it would be amazing,” suggests Singh. Paliwal says the least people can do is not go out of their way to harm them. Another suggests, feeding a single animal a day won’t take much time. “If you can make one chapati extra or feed a slice of bread soaked in milk, you would be doing a great service,” feels Rawat.