Street art in India is altering our urban landscapes, but is it all a radical makeover or just cosmetic makeup? The Emerging Power of Dharavi by artist Avinash at the East Mahim art district represents the children of Asia’s largest slum, rising above chaos and challenges to make their mark in the world.PHOTO: AKASH SHUKLA; COURTESY ST+ART INDIA FOUNDATION

The crime rate was once high in Kannagi Nagar, a once-derelict corner of Chennai.“No auto driver would go there. It just wasn't safe,” says street artist Joyston Christopher Vaz. Lately, however, the neighbourhood has a newer, somewhat disparate reputation. After a slew of public art projects gave the district an ambitious facelift, Kannagi Nagar has begun to attract many a curious spectator, eager to capture an Instagrammable moment.

Joyston Christopher Vaz, better known as Jcvaz, is the creator of The Game, a mural on the façade of a residential building in Kannagi Nagar. At first glance, the artwork appears to be a psychedelic cacophony, but look closer and you’ll find that Vaz has used his art to penetrate the area’s very fabric and its arguably murky modern history. His is the art of the big picture.

“Kannagi Nagar is a resettlement colony for fishermen who were forced to move here after the 2004 tsunami,”says Vaz. Ironically, the fishing community was since relocated far from the site of their livelihood—the ocean. “The Game depicts hybrid sea creatures—a reminder of that fact. I have deliberately used colours that suggest a cataclysmic oil spill. The work resembles a maze, something impossible to solve—just like the Kannagi resettlement issue.” In no way is Kannagi Nagar an outlier. Driving past Mumbai’s Dharavi, Asia’s largest slum, you are now sure to encounter clusters bursting with glowing public art and graffiti. The same is true of the Lodhi Art District in New Delhi, where dozens of Indian and international artists are often hard at work, turning drab building fronts into a colourful wonderland. In all of India's major cities, from Kolkata and Chandigarh to Bengaluru and Jaipur,one can now see a range of public art—portraits of pop culture icons or graffiti about climate change and gender equality. The country’s underpasses,railway tracks, highways, skyscrapers,gardens and even its graveyards are all present or possible canvases.

Thanish Thomas, co-founder of St+art India Foundation, likes to think of our cities as “grand open-air art museums”. His NGO’s objective,he says, is to make “public art accessible to a wider audience.” He believes that in an urban environment, “street art can serve as a sanctuary. It brings relief from the mundane cityscapes and helps open one’s mind to endless opportunities. It’s a dialogue and an appointment with the city and its residents.” Art, he adds, “is at the heart of human existence and public art is the soul of the cities we live in." 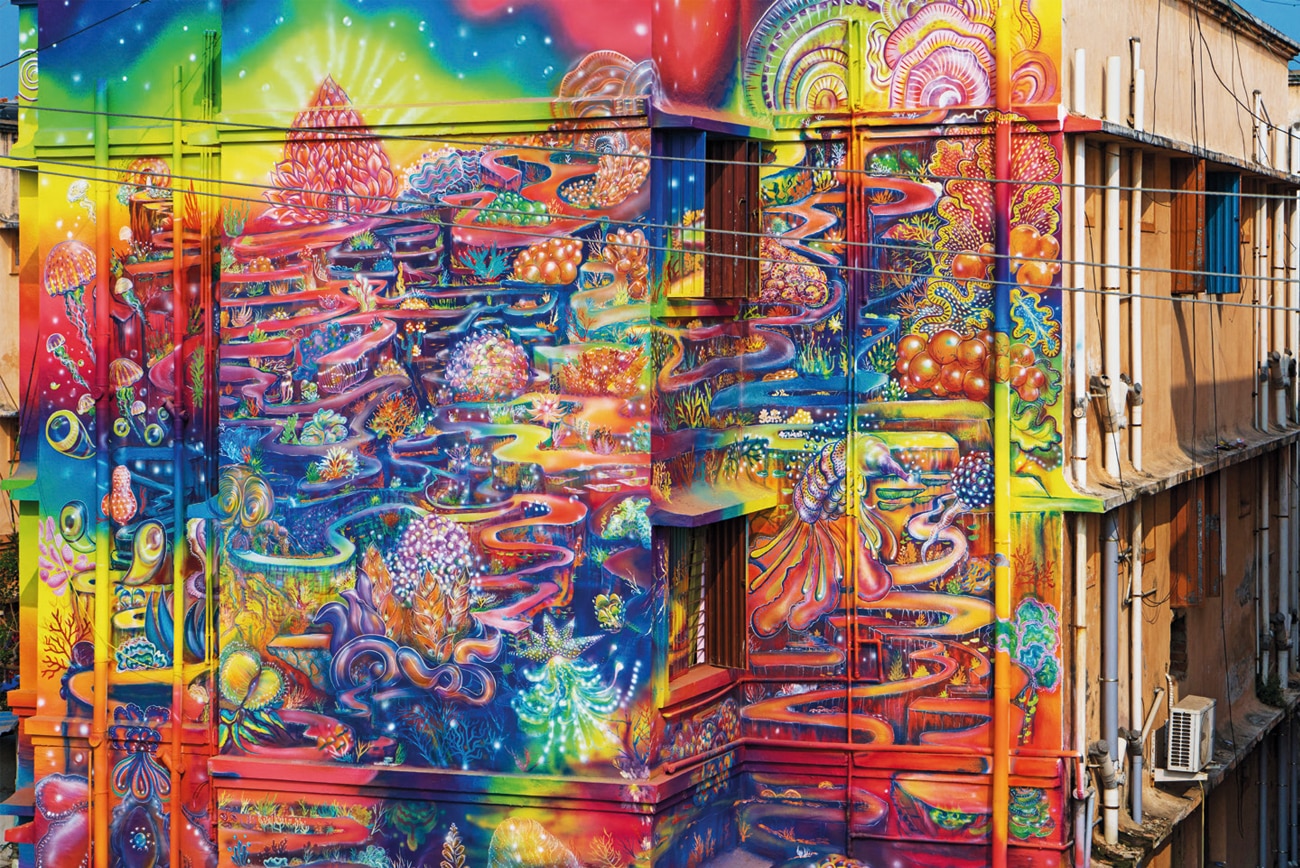 (Above) The Game , by street artist Joyston Christopher Vaz(shown below) In the eight years since its inception in 2014, St+art India Foundation has steadily worked towards propagating,and, in some cases, pioneering the cause of commissioned urban art across India. Having started with a seed fund from the Goethe Institute, New Delhi, St+art really only diversified into a multidisciplinary platform after Asian Paints stepped in as a vision partner. By employing several young artists, it has built a strident cultural community.

Considered one of the pioneers of graffiti art in India, Daku has worked with St+art India Foundation in the past. Painted on a public wall in New Delhi’s Okhla Industrial Estate, their famous collaboration, Breathe, was an urgent commentary about the capital’s toxic air quality. Daku says,“St+art India has played a major role in the rise of the street art phenomenon in the last decade, but I still think the explosion that everybody seems to be talking about is smaller than I would have liked it to be. A decade is a long time but we are still at a nascent stage in the development of street art compared to the West.”

The pseudonym Daku (meaning, bandit) is a deliberate attempt at Bollywood parody and its bearer chose this identity very much for its shock value. Speaking to Reader’s Digest,Daku says that before embracing the more anodyne role of an installation artist, he, like many self-respecting graffiti artists, started out as a vandal. “That was my previous life,” he says, admitting he’d had a few run-ins with the law.

“There’s a fine line between beauty and vandalism. Most of the street art you see in India is just an expensive shot at beautification. Graffiti is the opposite.It is ugly and raw and done without permission on a public or private wall.Graffiti has no rules and has historically been used as a powerful tool for social justice and to give a voice to the subaltern. It’s the most democratic and free-for-all medium.” While graffiti has been around for centuries—dating back to lewd messages on Pompeii’s public walls in the 18th century—modern graffiti is widely believed to have emerged in New York of the 1970s as an underground culture.Pioneers like Richard ‘Richie’ Mirando(known as Seen UA), Jean-Michel Basquiat, Futura, Keith Haring, DONDI and Taki 1983 operated mysteriously on New York’s subway system, using their ‘tags’ for an anarchic form of self expression. Later, many women artists, the likes of Lady Pink and Swoon,added a streak of feminism to the largely male legacy of street art. Meanwhile,building on Basquiat and Haring’s legacy, iconic European and British artists such as Bansky, JR and Ben Eine assiduously raised street art’s avant-garde profile to fine art prestige. Daku, who’s a fan of the French JR, says, “Ideally,street art should make people think and question things. At least that’s what I hope with my work.” 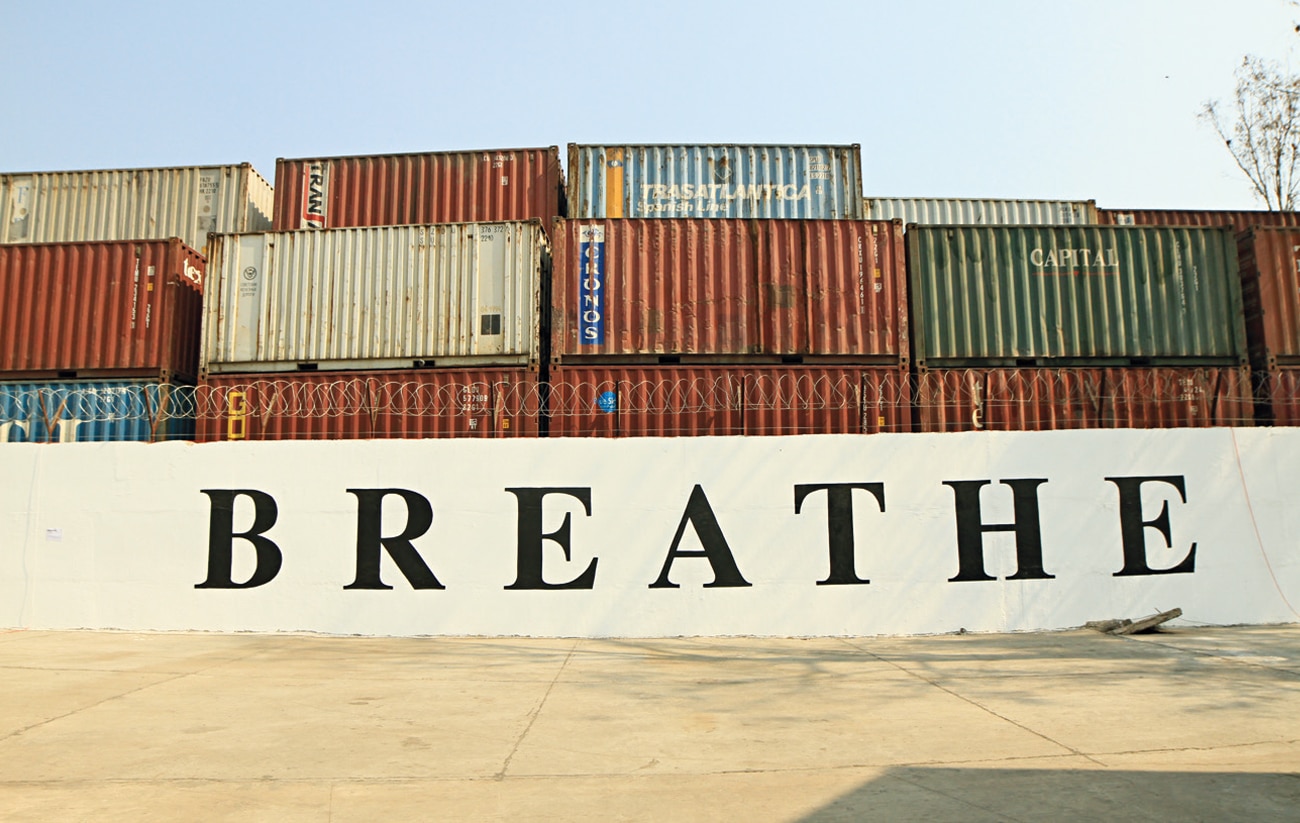 Often referred to as India’s Bansky, Mumbai-based Tyler creates a kind of iconoclastic graffiti art that feels instantly authentic. His 2020 lockdown series, The Walk of Shame, for instance,saw him paint the names of some obviously polarizing public personalities on city pavements. “There was a complaint against me at the Malad police station but since there was no FIR, I could slip away that time.” This wasn't his first brush with the authorities. “It’s like a cat-and-mouse game,which I have been playing for a long time,” says Tyler, whose alias is a nod to the cult hit film Fight Club. “When I’m doing graffiti, I cannot be seen on camera or by the cops, the watchman or any bystander. That is its provocative charm. It’s a risky job, almost like robbing a bank, but without the part where you walk away with the cash.”

Though Tyler says his aim is to drive social change through art, he also admits to being a level-headed guy who looks for “logic in everything.” He knows that the real impact of social messages in public spaces can be hard to quantify. “If you write, ‘Do not litter here’ on a wall, will people stop littering? If you say, ‘Polar bears are dying,’ you think it matters to Indians? Only one per cent of the Indian graffiti movement is about social and political causes. The rest is all make-up by people from St+art India,”he remarks. Unlike Tyler’s counterculture experiments, most of St+art IndiaFoundation’s mainstream art initiatives are supported by local government bodies. For example, the Kannagi Art District transformation was made possible by the Greater Chennai Corporation and Tamil Nadu Slum Clearance Board.Tyler, on the other hand, is a lone ranger,“burning his own cash”, as he puts it.

Given street art’s socio-political roots, commercialization of the form is an obvious concern. But the bigger worry, according to Mumbai’s visual artist Sameer Kulavoor, is the “beautiful mess” this nascent movement is rapidly becoming. Even though Kulavoor, a veteran of mural art, castigates the several local corporators who steal the limelight from talented,media-averse artists, he does add that not all of today’s public art is a thing of beauty: “There’s a haphazard way with which we are going, as far as street art is concerned. There’s a big difference in an organized and curated approach to public art versus a random, politically driven agenda where, in the name of beautifying, you pick up any public-facing wall and just dump a blob of paint on it. Would you call any random scrawl art or is it just kitsch?

”Kulavoor goes on to talk about the“selfie corners with angel wings” that now seem to have popped up all across Mumbai. “That motif has become so hackneyed. We are not even thinking creatively anymore. Nothing thought-provoking either. I can only say that it’s a very cosmetic sort of makeover which is going horribly wrong.” A version of this 2018 original graffiti by the artist Tyler was titled Let’s Take This Some Place Private.Photo: Tyler

Thanish Thomas of St+art India Foundation, for one, disagrees with these assertions. He makes mention of the several social causes that street art has championed: “Art helps in reflecting and finding creative solutions to existing issues. More than anything, we understand the value of supporting art and culture and have been using it in the service of the people since our inception.” He says street artists across India are increasingly relying on text and visuals to flag important issues of the day—gender inequality, domestic violence, women’s empowerment,LGBTQ+ rights and climate change to name a few. 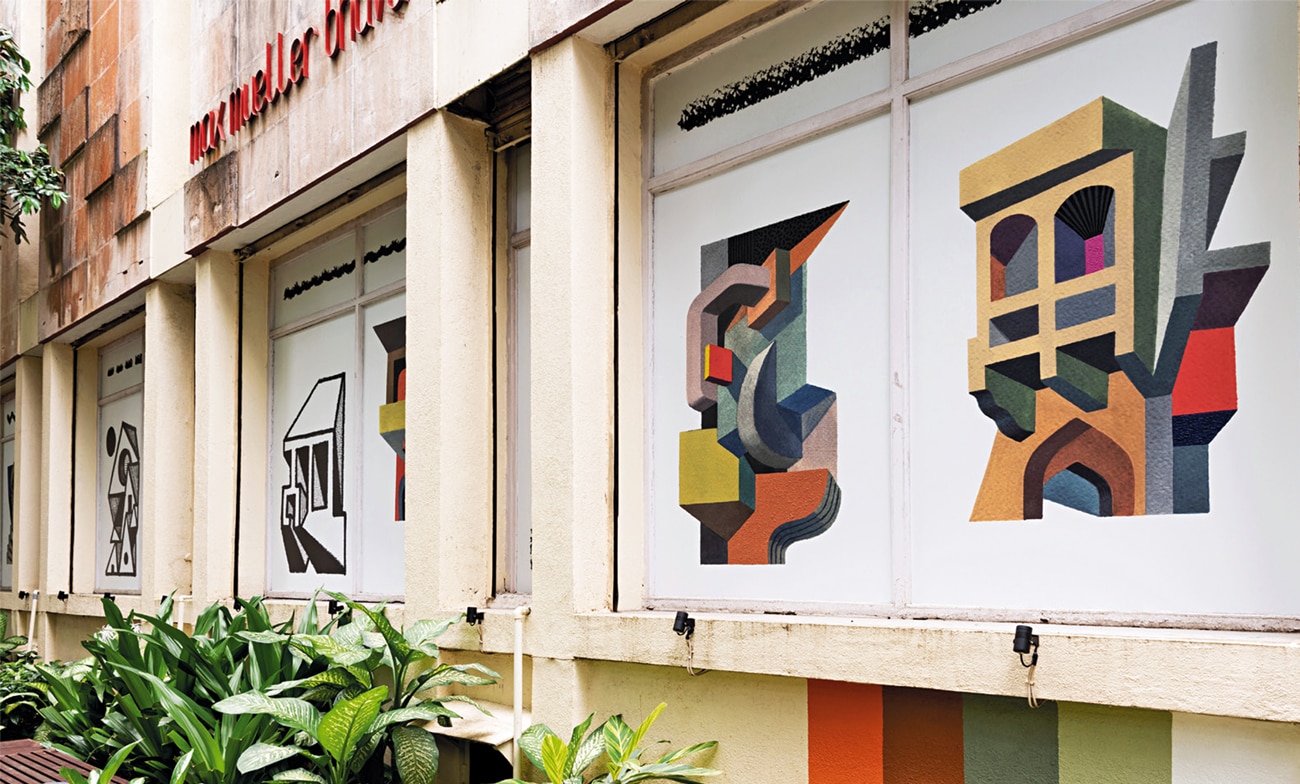 Thomas may have a point. Mumbai based graphic designer Jheel Goradia’s series, Breaking the Chain, has used Bollywood iconography to draw attention to sexism. Elsewhere, in Kolkata, the installation artist and photographer Leena Kejriwal’s Save Missing Girls campaign has helped raise awareness about sex trafficking.When Kejriwal’s black silhouette of a young girl appeared on several public walls, it instantly garnered attention.A form of guerrilla art, Kejriwal says it “was powerful both for the girls who made it and those who saw it.Every time you do guerrilla art, you are staking claim to your space. Most of these girls in the red-light districts are so marginalized and vulnerable that they don’t believe that they are a part of the city. The silhouette was an empowering symbol.

”Born in Gujarat, Daku lived in NewDelhi for a while, but he is now based in Goa. Would he, perhaps, like to revamp the state with his murals? “I like Goa the way it is. It doesn’t need street painting.Street art is needed in the harsh environment of the city where there’s no relief and that’s when a mural can bring a smile on someone’s face.” In Goa, he says with a laugh, “We have enough natural beauty. There’s joy and happiness.Why do you need street art?”