This 16-foot-tall Stainless Steel Installation by Anish Kapoor is located on the Crown Plaza of Jerusalem’s Israel Museum. 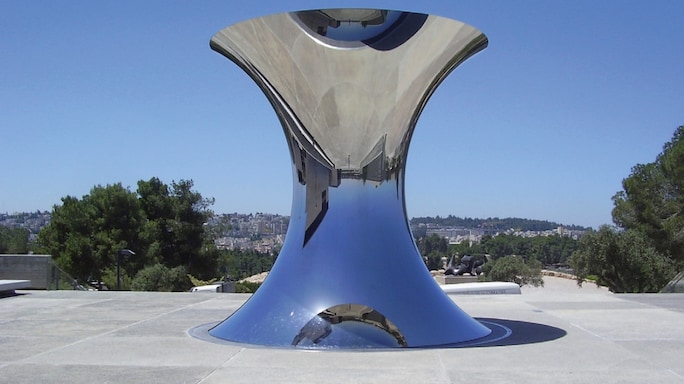 Born in India and based in the UK, Anish Kapoor has long been creating art that is as conscientious as it is playful. In 2010, 10 years before the pandemic inversed everything we once took for granted, Kapoor installed on the Crown Plaza of Jerusalem’s Israel Museum, a 16-foot-tall polished steel hourglass called Turning the World Upside Down. The sculpture did something altogether fantastic— doubling up as a gigantic mirror, it reversed our vision. As we saw ourselves up above, the sky was at our feet. In Jerusalem, especially, this had a deeper significance: Heaven was finally on earth.

Kapoor’s work is immersive. By allowing his audiences to participate in the whimsy of his often colossal art, Kapoor forces us to question our notions of space. Turning the World, however, does something more. It forces us to revisit the ways in which we perceive time. Those visiting the Israel Museum in 2020, for instance, may well have felt that time, like Kapoor’s hourglass, upends all things.