The Wondrous Beats Of Sivamani's Drums

Journalist and author Shantanu Dutta looks back at the extraordinary career of one of India's most accomplished drummers, Sivamani, in his book Calling Elvis 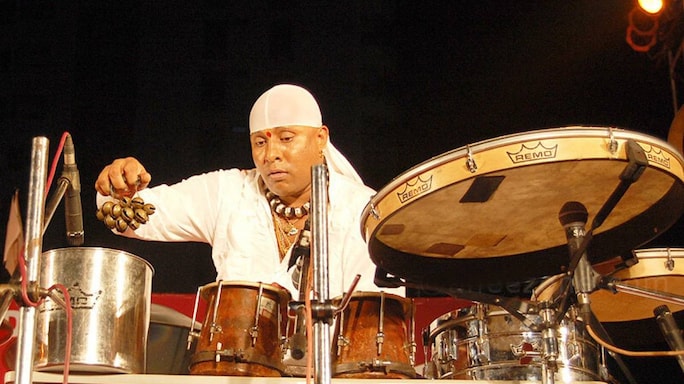 One of the first assignments I volunteered for in Delhi in the August of 1996 was to interview Sivamani, that wondrous drummer from Madras who was playing at the Maurya Sheraton on the occasion of the fourth anniversary of the hotel’s exclusive Jazz Bar. I had not heard him play till then. But it would be more than two decades later when I would get to hook up with [Ranjit] Barot—a telephone conversation initially intended as a short tete-a-tete on the music of guitarist Amyt Datta with whom he had played, but that went on for about an hour discussing his amazing journey that began at home in Varanasi in a family rooted in classical traditions.

When I did get to hear Sivamani, it was as though a thousand drums were playing. Anyone who was there at the Jazz Bar that night when Siva played with the Louiz Banks quintet would tell you he moves at the speed of light and how his one-to-ones with the bass would make everyone forget their drink. His technique is mind-blowing, his innovations stunning. Not many in his clan end a tune with a sharp smack on his bloated cheek. ‘Pop’.

That’s the beat to which I entered the Jazz Bar that Sunday morning. The hangover of the night before hadn’t been cleared off the tables, but Sivamani was there. Fresh in his well-groomed ponytail. On the drums, jamming.

If Siva’s inspiration came from his mother, his idol was his father. A drummer of repute himself, S. P. Anandan was sure about one thing: Siva would not play the drums. So, when papa was working at the studio, young Siva would bang away to glory at home. Right?

"I used to create a lot of noise, but amma never said anything."

That was only the beginning. Siva was soon bunking school to hide in the studio and watch his father play. Noel Grant, another famous drummer in the Madras of the ’70s, was the one a young Siva worshipped. "His riding on the cymbals (hitting the stick to the cymbal gently, continuously) was amazing."

Thrust on to stage suddenly one evening in 1974 to play R. D. Burman’s hip swinger from Sholay, young Siva excelled himself. Yes, it was 'Mehbooba', one of R. D. Burman’s biggest hits which we later came to know was ‘inspired’ by 'Say You Love Me' by Demis Roussos. In any case, S. P. Balasubramanium loved Siva’s playing that day. Soon, he was a permanent fixture in S. P.’s troupe. With extended drum solos at every performance, the big time beckoned him.

But Siva got tired of film music after a while. And in came Frank Dubier, who played the hotel circuit. 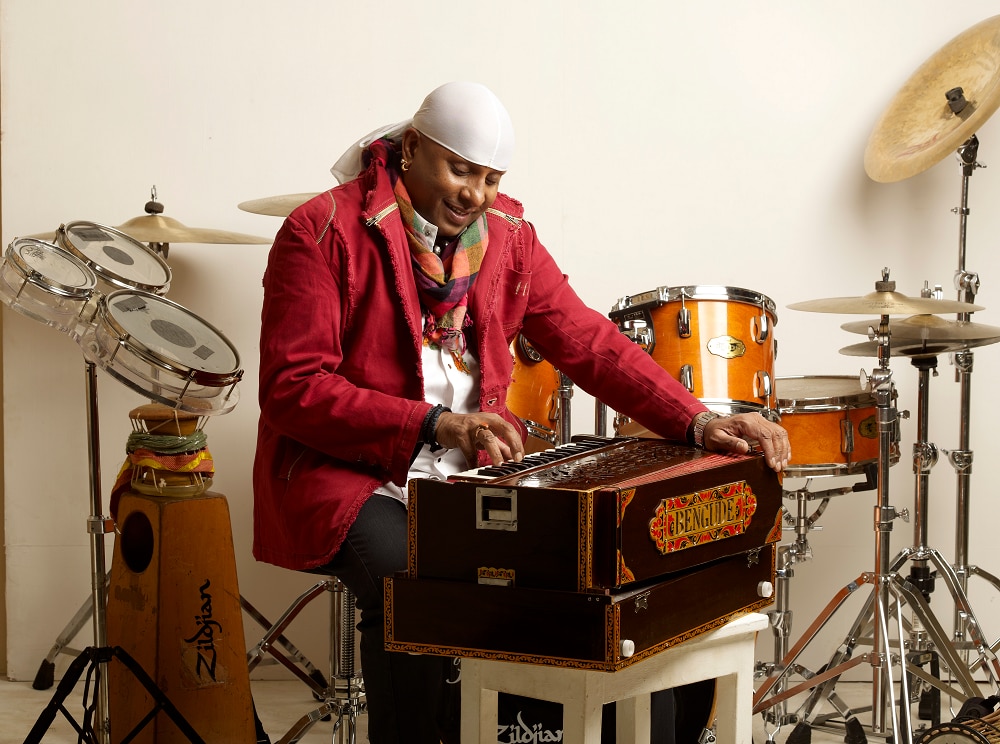 Sivamani playing the harmonium for a change (Photo via Wikimedia Commons)

"Just when I was looking for other avenues, Frank introduced me to jazz sometime in the ’80s. And boy, I was dazed and confused. The only thing I can now remember is that I thought, 'Man, what a beat'."

There was no looking back ever since. Although Siva knew nothing of the genre, he surprised everyone by his perseverance. He often played alongside a track he hadn’t heard before. And since jazz is all about improvisation, he had no problems. Seniors said he had the touch.

It was not long before tabla wizard Zakir Hussain spotted him. No one had introduced them. No one needed to. Their music did the talking. In passing Siva spoke of his idols and mentioned the legendary Billy Cobham. "My dream would be to touch his feet one day, I had told Zakir casually," he recalled. April 24, 1990 turned out to be a red-letter day. Zakir would be playing with Billy Cobham in Bombay, and Siva was invited. Others in the band were Vikku Vinayakram (we heard him with Shakti) on the ghatam and father Anandan. They set Rang Bhavan on fire.

Billy, they say, was zapped. He invited Siva to the Munich Jazz Festival. France, Switzerland and the US followed as did fairly regular appearances at the annual Frankfurt Jazz Fest. It was there that Siva joined the ranks of other great drummers when Zildjian, one of the world’s most sought-after cymbal manufacturers, asked him to endorse their range.

But Siva stayed grounded. The collaborations with Billy Cobham and Zakir Hussain, gigs and jam sessions with Grover Washington Jr and George Benson were only the beginning. He is still open to popular film music and works regularly with friend A. R. Rahman among many others.

But if passion truly has a colour, it is the shiny golden hue of his drum kit. He loves to play. At a live concert, Zakir Hussain once introduced Siva as a "phenomenon that walks the planet but once in a century". These days, he surely straddles the music world, both at home and abroad. From IPL opening shows (2008, 2010) to films (think Anima Nambi, Kavithan as composer, Roja, Rang De Basanti, Dil Se where he played), Siva is a first-name recall among music lovers. His collaborations, Asia Electric with pianist Louiz Banks and sitar virtuoso Niladri Kumar, and Siraha Trio with pianist Harmeet Manseta and U. Rajesh (younger brother of U. Srinivas) on mandolin, are a happy mix of ragas, western harmonies and orchestration. His work with New Life, that includes vocalist Runa Rizvi, keyboard and harmonium player Vishal Dhumal and Ojas Adhiya on tablas blend ghazals, sufi and folk music. Constantly exploring, he stops at nothing, creating tunes from Limca bottles to drumming up a rhythm with biryani handis of various sizes. Why, he was in Calcutta in January 2018, playing with guitarists Amyt Datta and Pandit Vishnu Mohan Bhatt, prior to a solo tour of the US between April and May. Siva just keeps going.